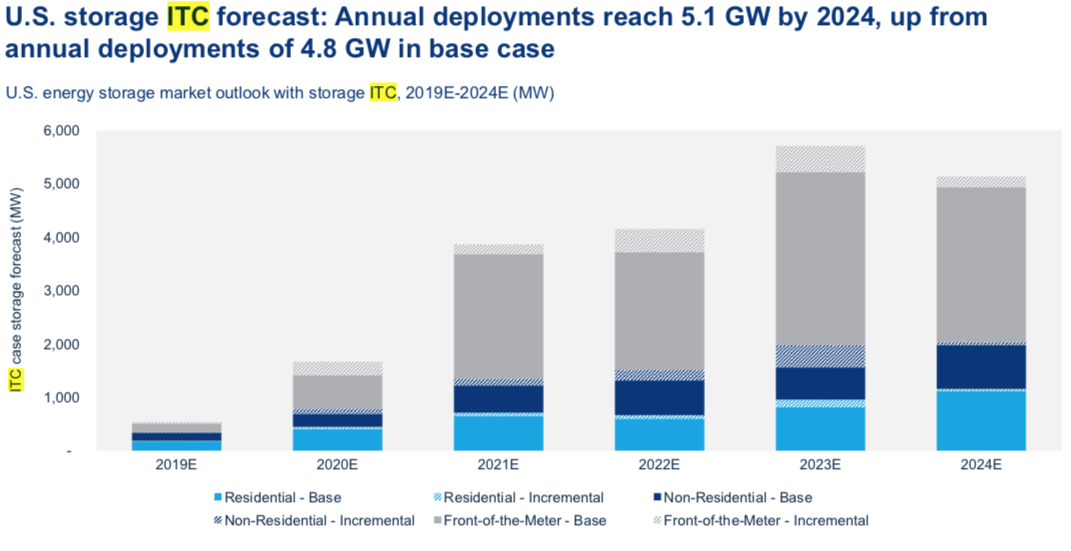 The US Solar Energy Industries Asssociation and Energy Storage Association joined forces yesterday to promote a ‘Day of Action’ in calling for an Investment Tax Credit to be applied to energy storage technologies.

ESA policy director Jason Burwen also took the time on Twitter to acknowledge the backing of the American Council on Renewable Energy (ACORE), whom Burwen said had been “among the loudest supporters of #StorageITC…”.

In fact, Burwen also tweeted out a reminder of the sheer number of trade groups across the renewables and energy industry who put their names to an April 2019 letter to Senate Leaders Mitch McConnell and Chuck Schumer. Alongside the ESA, SEIA and ACORE, groups from wind and hydropower got involved, as well as the National Electrical Manufacturers Association, Sheet Metal and Air Conditioning Contractor’s National Association and others. In June, Energy-Storage.news reported that a further clean energy trade group coalition letter urged lawmakers not to “miss this opportunity” that the ITC presents.

The ESA put out a campaign plan and ‘toolkit’ including a draft/sample letter that could be sent to Representatives and Senators, asking people to get involved with calls and emails on the 10 September Day of Action and then getting on-message to put the case forward for the national ITC strongly through November.

That is when the case for the passage of S 1142 and HR 2096 – the two bills making energy storage eligible for the federal ITC – will be heard, “mirroring the solar ITC, which will substantially increase the jobs, economic, and grid reliability benefits of energy storage.” At present the 30% ITC is applicable to storage only if paired with solar and only if installed at the same time.

Figures out today in research company Wood Mackenzie Power & Renewables' quarterly Energy Storage Monitor, produced in partnership with the ESA, forecast that the ITC could add an extra 0.3GW of annual deployments by 2024: from 4.8GW in its base case scenario to 5.1GW with the tax incentive.

Visit ESA's focus page on the storage ITC. The group is also encouraging Twitter users to use the hashtag #storageITC in supportive tweets.