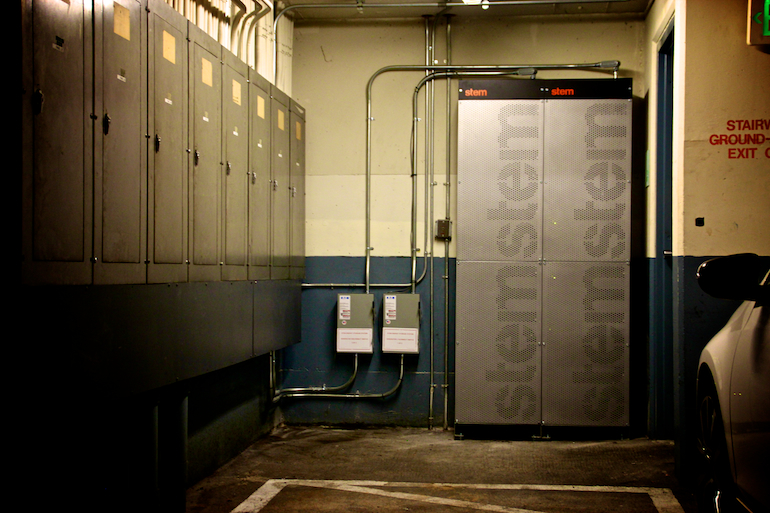 Energy-Storage.news has reported extensively on activities in the Canadian province, in which the Global Adjustment Charge (GAC) policy mechanism has driven C&I battery storage installations. The GAC is applicable to all electric ratepayers, but it levies higher charges on commercial and industrial (C&I) electricity users to pay for grid upgrades, clean energy infrastructure and the environmental costs of fossil fuel use.

It’s similar to what has been seen in the US, where Stem Inc uses what it calls ‘artificial intelligence-backed’ energy storage systems based on lithium-ion batteries to reduce businesses’ monthly demand charges, which like the Ontario GAC are calculated from the amount of power drawn from the grid during peaks in network demand. In addition to reducing the customer's electricity bills, within the US Stem has also aggregated 'fleets' of behind-the-meter energy storage systems together to create 'virtual power plants'.

Stem announced yesterday that Ontario Teachers’ Pension Plan has committed CA$200 million (US$152.8 million) for the financing of project acquisitions in the Ontario C&I market that lend themselves well to the US company’s AI-driven model.

In addition, multinational finance group BNP Paribas and energy technology investor Magnesium Capital have also just rounded off their involvement in Stem Inc’s previous Series D funding round. The Series D reached its second closing with US$26 million of investment from BNP Paribas, Magnesium Capital, and others.

Energy market observers and experts have long noted that the introduction of institutional investment money opened up the global market for solar PV and pointed out that this will be the profile of investor necessary to do the same for energy storage.

In early 2017, the Labourers’ Pension Fund of Central and Eastern Canada (LiUNA) committed CA$200 million of project financing towards the pipelines and development activities of developer NRStor. Just last week NRStor announced a further 42MWh of Ontario C&I projects stretched across eight installations. SUSI Energy Storage Fund, a Swiss fund aimed at encouraging institutional investors to get on board with energy storage also reached its first closing at €66 million (US$70.4 million) in April 2017, with the fund involved in financing 12MW of energy storage in Ontario by Convergent Energy & Power.

Meanwhile the latest financing deal is actually Ontario Teachers’ Pension Plan group’s second with Stem Inc. The pension group was also involved in the earlier US$80 million closing of the Series D round.

Stem said it expects the pension fund’s investment to be fully utilised within a year. The company has tailored an offering specifically to target the GAC, which it launched at the beginning of this year. Stem Inc claims that it has now got US$650 million in its project finance pool, 860 storage systems under management and it recently expanded into Japan, building on its presence in the US and Canada.

Regular readers of this site would have noted the likes of Enel making their first incursions into the Ontario market recently, while the single largest storage roll-out to date in the province was a 52.8MWh tranche of projects by Powin Energy.

Ontario, Canada was one of the regions pinpointed in our recent 'Global Energy Storage Opportunity 2018', in an article by David Hebert of EnerNOC.