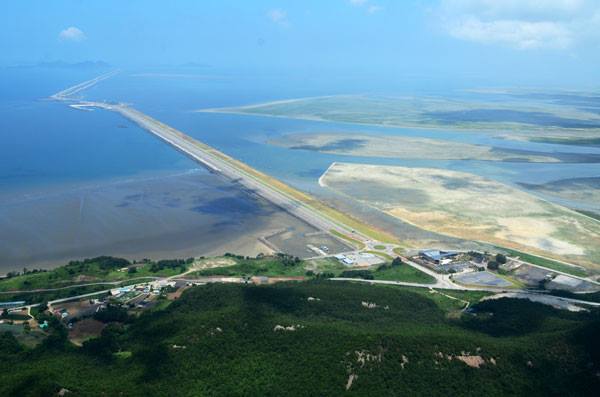 The Saemangeum Seawall Project, completed in 2010, is said to be the world’s largest dyke. Credit: Korea Clickers/Facebook

South Korea’s government is planning for 100MW of battery storage as part of a nearly 3GW hub of solar PV and wind on reclaimed land in Saemangeum, which is an estuarine tidal flat on the coast of the Yellow Sea.

A spokesperson from Saemangeum Development and Investment Agency (SDIA), an agency run under the Ministry of Land, Infrastructure and Transport, told Energy-Storage.News that the agency will oversee 2.6GW of projects. This will include 2.4GW of solar, 100MW of wind and 100MW of battery storage.

Meanwhile, the Ministry of Agriculture, Food and Rural Affairs (MAFRA) will oversee 400MW of solar PV.

The project overview was announced this week, but this vision is very much in the early stages and detailed plans are only likely to be brought out at a later date. The projects would be located on reclaimed land at Saemangeum, which the Korean Government is hoping to turn into a global business hub and free trade hub of Northeast Asia, after a major damming operation known as the Saemangeum Seawall Project, completed in 2010, said to be the largest dyke in the world.

Separately, a release from the Jeonbuk Province government announced plans for up to 1GW of offshore windfarms off the coast of the city of Gunsan, as well as plans to build a port behind the offshore wind farm to attract manufacturing companies.

Back in September SDIA issued a release notifying that it had signed a memorandum of understanding (MoU) with Rena International, a foreign investment company established by Korean company, Geumgang ENG, jointly with China-based PV firm Renesola, for them to invest around KRW55.5 billion (US$49 million) in the Saemangeum Industrial Complex from 2018 to 2020, for assembling PV modules and manufacturing energy storage systems, while creating 120 jobs in the process.

Back in September, Macquarie Capital Korea, a subsidiary of investment firm Macquarie Group, signed an MoU with the county office of Goesan in South Korea to finance a significant solar-plus-storage project, while it has also invested in what is said to be the largest energy storage project in the country.