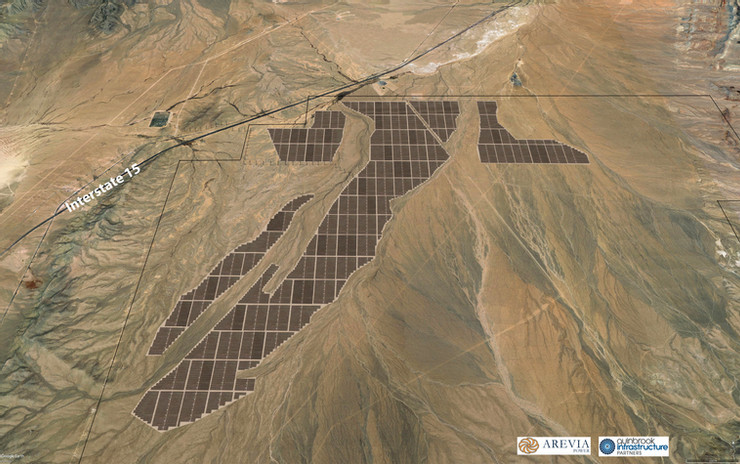 Rendering of the 690MW Gemini solar plant which will have 1,400MW of battery storage. Image: Primergy Solar.

As the 522MW North Valmy Generation Station in Winnemucca, Nevada, is scheduled for retirement, NV Energy wants it replaced by 2025 and has given details of 600MW of solar with 480MW of battery storage across the two planned sites. Megawatt-hour capacity of the battery storage was not disclosed by the company in a press release.

NV Energy and its partner at the North Valmy coal plant, Idaho Power, agreed in 2019 that the Units 1 and 2 of the power plant would be retired by the end of 2019 and then by the end of 2025 respectively. It’s the latest example of emissions-free renewable energy paired with batteries being used to replace the role on the grid that coal has traditionally played, with similar plans being seen in the Mid-Western US and in Australia of late. Big US power generation holding company Vistra Energy requested for legislative assistance in the transition from coal to renewables in Illinois, where the company has earmarked a coal power plant for early retirement.

Both of NV Energy’s newly announced solar-plus-storage projects are being developed by Primergy Solar, a solar PV and battery developer-owner-operator which was launched by specialist low carbon and renewable energy infrastructure investment group Quinbrook Infrastructure Partners in May 2020. Through Quinbrook, Primergy is working on one of the world’s largest solar-plus-storage projects to date, which is also in Nevada, a 690MW PV + 1,400MW battery plant called Gemini.

Meanwhile, NV Energy, which is owned by investor Warren Buffet’s Berkshire Hathaway Energy, is also proposing to build three more grid-tied standalone battery energy storage systems totalling 66MW of output in the north of Nevada which will be used to store energy generated during off-peak times to mitigate the impact — and costs — of dealing with peaks in demand.

The company has filed the plan with Nevada’s Public Utilities Commission (PUCN), NV Energy said yesterday. A decision is expected to be made on the IRP by the end of this year. The western US state is targeting net zero emissions by 2050. NV Energy already surpassed a target of 1,000MW of battery storage procurements that was set for it by PUCN in March 2020 with the addition of three solar-plus-storage plants that were approved by the regulator last summer.