It did not reveal the buyer or precise location but said that the project consists of 168 sets of its 20-feet energy storage container solution. It will be a 1500V system compliant with UL 9540A.

It said the American energy company has over 2,000 engineers working in power generation, energy storage systems and digital energy solutions and supplies solutions worldwide. CLOU became a qualified supplier to the company in 2021.

The two have already partnered before with agreements to supply a 3MWh system in December 2021 and a 69MWh one in January 2022, both in the US, the company added.

The company’s share price on the Shenzen Stock Exchange opened 10% higher on Monday, March 28, the first day of trading after the South America project announcement on Saturday.

The announcement was made by its CLOU Global segment which calls itself a ‘Comprehensive Energy Services Provider’ and says its product portfolio includes storage, electric meters and their accompanying infrastructure including testing equipment, enclosures and data acquisition solutions.

CLOU also has a separate website, CLOU Energy Solutions, which says the company has supplied utility-scale energy storage solutions across the US, as well as Costa Rica, Cabo Verde and Haifeng in China. It also details commercial & industrial site deliveries in China and microgrid solutions provided across Asia and one in Rwanda.

South America has not had a great deal of utility-scale deployments of energy storage to-date. This project from CLOU represents by far one of the largest ever to have been announced on the continent.

Much of South America’s other big news in storage has been in Chile too. Late last year, Statkraft announced it had won a tender in Chile to develop wind farms with up to 1GWh of BESS attached shortly before global system integrator Wärtsilä won its first battery project on the continent there.

The Chilean government is also set to launch a power auction later this contracting 5,250GWh/year for 15 years, which will involve storage paired with renewables. 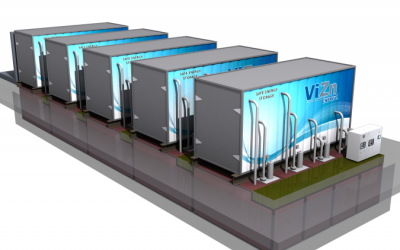 September 20, 2022
Gravity-based energy storage company Energy Vault has been issued a mandate for an initial 2GWh of its proprietary solution at net-zero industrial parks in China.

Competition for battery cells between EV and energy storage sectors to ease from 2024, CEA says

August 25, 2022
The construction of battery cell factories catering specifically for stationary energy storage means competition for supply with the EV sector will cool off in the next couple of years.