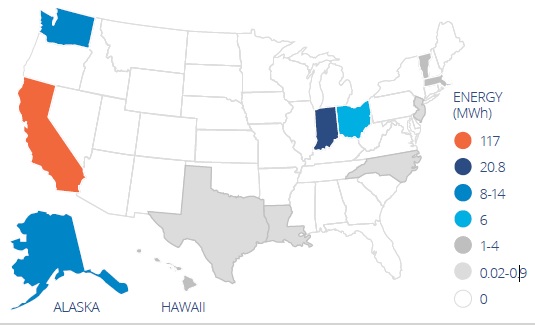 Utility-supplying energy storage deployment in MWh across the US in 2016. Image: SEPA.

As might be expected, California’s main utilities led the way in 2016 for US state-by-state deployment of energy storage, with Southern California Edison installing as much as 40% of the national total, according to a new survey.

The Smart Power Electric Alliance (SEPA), a trade association covering the clean energy activities of utilities in the US, carries out an annual survey of those electric utilities and this year canvassed the views of some 115 respondents. From that, SEPA built out a standalone report looking at utility deployments of energy storage. According to the group, utilities surveyed are between them responsible for the power used by some 75 million of the total 130 million US utility customers.

SEPA found that 207MW / 257MWh of grid-connected energy storage was added, numbering 829 systems, across the US in 2016. This brings the nationwide total up to 622MW / 661MWh, or 2,399 systems. This equated to 147MW / 175MWh of utility-supplying battery projects, mostly lithium-ion, with an average system size of 5.7MW / 6.7MWh, installed last year across 26 projects. By contrast, just three flow battery systems were deployed in the year, adding up to 2MW / 6.6MWh.

Utilities active at all scales of energy storage

The three main investor-owned utilities in California have a mandate under Assembly Bill 2514 to connect 1.325GW of behind-the-meter energy storage by 2024 between them, to which another 500MW was added a few months ago by state governor Jerry Brown. Perhaps unsurprisingly, those three utilities, Southern California Edison, Pacific Gas & Electric and San Diego Gas & Electric, were the country’s leaders among those utilities surveyed for deployment by megawatt-hour.

Interestingly, looking at watts-per-customer installed for the year, it was a much smaller utility, Sterling Municipal Light Department, which only connected its first large-scale battery (and the first utility battery in Massachusetts) in October 2016, which was number one. Sterling deployed 533 watts per customer. Since last year, Massachusetts has been expected to set itself a state-wide energy storage target for electric companies to procure “viable and cost-effective” energy storage systems by 2020.

Utilities are still pushing forward the residential market too, with investor-owned utilities accounting for as many as 1,447 of the total 1,762 household batteries installed across the US, with 555 of those in California. The total adds up to about 11.2MW / 20.2MWh cumulatively. The residential market still lags behind the utility segment, with just 4.5MW / 7.5MWh installed in 2016, with an average system size of 8.1kW / 13.5kWh. This appears to present a slight increase in system size – looking at cumulative installs the average to date has been a 6.3kW / 11.4kWh system.

Meanwhile, for non-residential, non-utility battery storage systems, again California is the leader, perhaps due to programmes like the SGIP incentive scheme and providers like Stem and Green Charge serving commercial energy storage market segments in the state. California has deployed 88% of those, 82MW / 114MWh, from 486 systems. So far, other states are still at an ‘early adopter’ stage, or hardly engaged with the segment at all.

SEPA found that four states in the US have energy storage incentive schemes for customers. California’s SGIP, Maryland’s 30% tax credit policy in system purchases and Nevada’s SB 145 mandate for utilities to develop their own customer incentive schemes figure heavily, but also mentioned is a US$300 per kWh support programme in New Jersey. Meanwhile California, Massachusetts, Nevada and Oregon are the only four states to have already signed energy storage commitments into law at policy level.

The SEPA report goes into many other areas, including a look at the various transmission and distribution networks across the states and how they have enabled participation of energy storage, at how the price of lithium-ion batteries has fallen by 60% since 2012, as well as explaining some of the different ways utilities are offering or marketing energy storage to their customers.