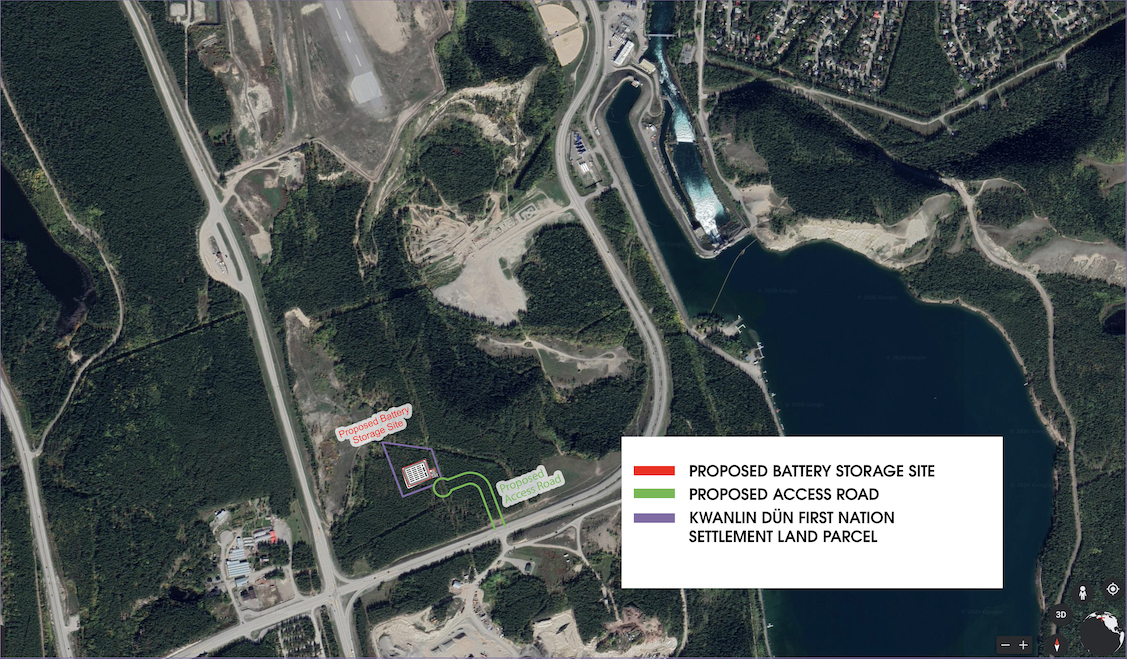 Site selected by Yukon Energy for what is thought will be the northernmost large-scale battery system in Canada. Image: Yukon Energy.

Steps forward have been taken in the development of a grid-scale battery energy storage system (BESS) in the Yukon Territory, northern Canada, which will help stabilise the region’s grid and reduce reliance on fossil fuels.

Local utility Yukon Energy, which is publicly-owned, is planning the 7MW / 40MWh battery in Whitehorse, near the Alaska Highway. Yukon Energy described the project as a “critical investment” in the group’s ability to meet growing electricity demand and for responding to emergency shortfalls of power. The utility has to date been heavily dependent on burning diesel fuel as backup.

The Yukon’s grid is isolated and the utility said that meeting winter peak demand is “one of the largest challenges” that it faces. The battery system would charge with energy during off-peak times and discharge to the network during peaks. The battery project has a planned 20-year lifetime. The project will be the largest grid-connected battery in the north of Canada – battery storage provider Saft completed a project in 2015 in Colville Lake, 50 miles north of the Arctic Circle, but that project is just 200kW / 230kWh and the community is entirely off-grid and until that project, which paired the batteries with solar panels to meet about half of Colville Lake's energy demand, was powered only with diesel generators.

A final site location selection (pictured) was announced on Monday. The Whitehorse battery system will be sited on Traditional Territories of two indigenous First Nation groups, Kwanlin Dün First Nation and Ta’an Kwäch’än Council. The land was identified by the First Nation as suitable for development while Yukon Energy said an assessment of the technical, economical and socio-economic attributes of the site has been completed.

Ta’an Kwäch’än Council Chief Kristina Kane said that the Council is in “full support of this project, as it will help to reduce diesel consumption and reduce Yukon’s carbon emissions,” adding that alongside Kwanlin Dün First Nation, Ta’an Kwäch’än Council is a “committed partner” to the initiative. A steering committee for the project was formed in August 2020 including representatives from both First Nations alongside Yukon Energy, selecting two possible sites for the project, one of which was ruled out last December due to “strong public opposition” to the site, Yukon Energy said.

Project Benefit Agreements for battery system will be formed through negotiations between Yukon Energy and the First Nation groups, so that both Kwanlin Dün First Nation and Ta’an Kwäch’än Council will share benefits of the battery system’s use to the fullest extent possible. Agreements will be subject to approval from relevant authorities including the government of each of the two First Nations.

“By participating in projects like this on our Traditional Territory we are realising and activating our potential for economic development that was laid out in Chapter 22 of our Final Agreement. We wish Yukon Energy success in managing and delivering this innovative project. We see it as another step toward stabilising Yukon’s isolated grid and reducing Yukon’s reliance on fossil fuels for backup power generation.”

The utility has issued a tender for the battery energy storage system (BESS), which closes on 1 March 2021 while the project is expected to be complete and the battery system in service by the end of 2022.

It is being part-funded with CA$16.5 million (US$13.3 million) from the Canadian government’s Investing in Canada infrastructure plan, which has a Green Infrastructure Stream while Yukon Energy is expecting to invest about CA$14.5 million.

“Yukon Energy is firmly committed to establishing mutually-beneficial and strategic partnerships with First Nations governments and development corporations to build Yukon’s clean energy future. I would like to extend my sincerest thanks to Kwanlin Dün First Nation, Ta’an Kwäch’än Council, and to each of their representatives, for collaborating with us on the battery project. I personally look forward to continuing to working with both First Nations and their representatives in the coming years as more opportunities for green energy in Yukon come to fruition,” Yukon Energy president and CEO Andrew Hall said.

Large-scale battery storage development in Canada has been most concentrated in Ontario’s commercial and industrial (C&I) sector, where industrial entities pay high peak demand costs for electricity and can use batteries to reduce that levy. However, there have been a few utility-scale projects and initiatives to help benefit the grid and / or integrate renewable energy around the country announced recently. The grid operator in the province of Alberta is conducting a pilot of battery storage as a grid-balancing fast frequency response asset, for example. The province's first grid-scale battery storage project, a 10MW / 20MWh Tesla system, also went online late last year at a wind farm.

Meanwhile the national government has said it recognises the importance of energy storage for decarbonisation and also as a driver of economic activity through infrastructure investment as it plots the country’s course to economic recovery from the impacts of COVID-19. Executive director of Energy Storage Canada trade association Justin Rangooni recently blogged for this site that Canada needs to act fast to capture the benefits of energy storage both environmentally and economically.