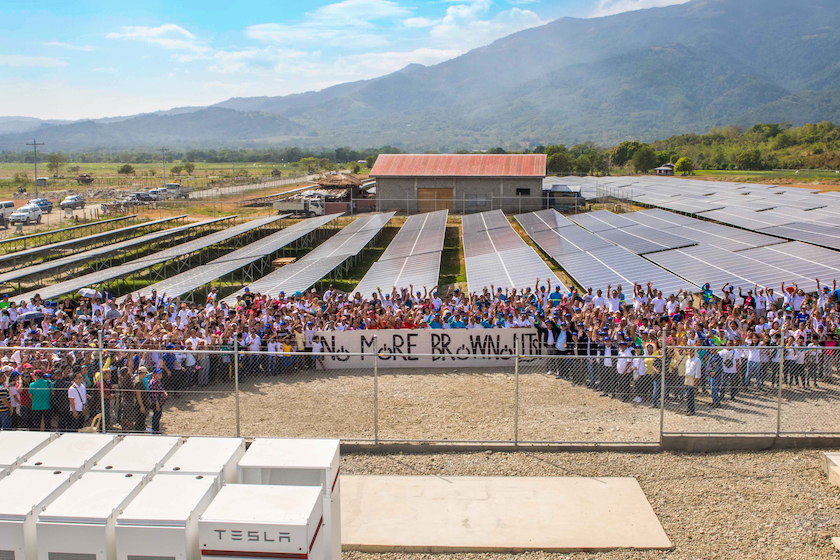 While there has only been one large-scale lithium storage system connected to the grid, there have been other distributed storage projects such as the one pictured. Image: Solar Philippines.

A 48MW grid-scale battery project looks to be under development at an unnamed location in the Philippines, local news outlets have reported.

The chief operating officer of Aboitiz Power, described recently by PV Tech as one of the country’s largest power producers, told reporters last week about the forthcoming project. Emmanuel Rubio was speaking at a forum event on electricity policy, hosted by the University of the Philippines’ Energy Policy and Development Program-hosted event (EPDP).

The Manilla Times and other local news outlets reported the COO’s remarks. According to Rubio, the 48MW project would be located at an existing fossil fuel plant on Mindanao, the Philippine’s second largest island.

According to The Times, Rubio said the project would be used to “enhance” Aboitiz’ “ability to provide ancillary services,” while also mentioning that the storage system could provide “contingency reserves” to the grid. However, the COO was reported as saying that the project was at a “preliminary” stage, including carrying out technical studies.

Rubio said the company would have to work closely with the national grid operator, the National Grid Corporation of the Philippines, but that the project could be completed by the end of 2019. So far the US Department of Energy’s Global Energy Storage Database lists only one large-scale, grid-connected battery storage system in the Philippines, a 10MW project executed by AES at a coal power station and connected in 2016.

Energy-Storage.news also reported in 2017 that developer Solar Philippines was developing a utility-scale solar-plus-storage project, pairing lithium batteries with a 150MW PV plant. Meanwhile, on a smaller scale, a 2MW PV microgrid, with 2MWh of Tesla battery storage and 2MW of diesel backup was completed by Solar Philippines in March this year, with villagers proudly proclaiming that due to the improvement of power reliability there would be ‘NO MORE BROWNOUTS!’

There have also been a handful of commercial or community systems developed in the country, while German residential and small-scale commercial battery storage company Sonnen struck a distribution deal to get into the Philippines and Malaysian markets in late 2017.

Energy-Storage.news emailed Aboitiz Power for confirmation of the news and for further information, but did not receive a reply ahead of publication. PV Tech reported that the company, via a newly created subsidiary, Aboitiz Power Distributed Energy, Inc, entered the Philippines rooftop solar market in April this year.