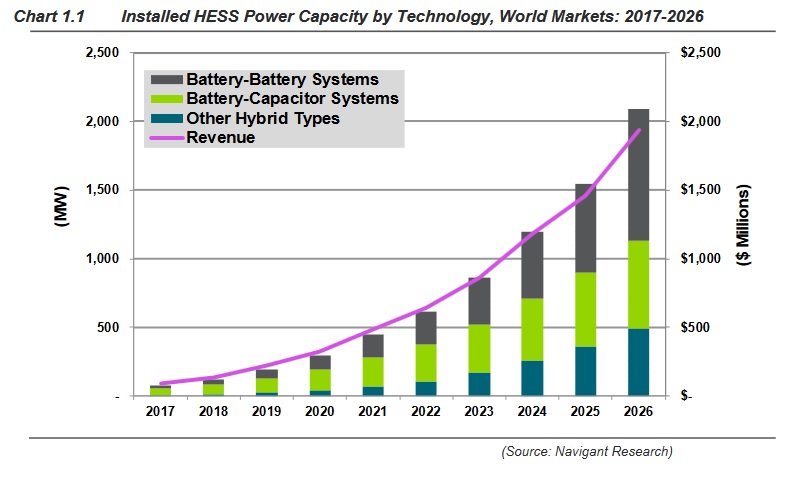 Hybrid systems combining the complementary aspects of more than one technology could “change the energy storage landscape”, with 2.1GW predicted for deployment in less than 10 years, according to a report from Navigant Research.

“Hybrid advanced battery markets: Battery-battery, battery-capacitor, and other hybrid systems: Global market analysis and forecasts” says that by 2026, the installed capacity of such systems will be 2.1GW, an enormous leap from around 78.6MW today. Hybrid energy storage systems “have the potential to change the energy storage landscape and give customers better options to service their needs,” Navigant said.

Navigant defines hybrids as “a stationary ESS that integrates two or more energy storage technologies with complementary operating characteristics”. Most battery-based systems are either designed to offer short bursts of high power or suited to energy-intensive applications that consistently put out low power for longer durations. Using energy storage technologies in applications for which they are not the best fit can result in performance degradation and can have cost implications – it can also lead to safety issues around charging and discharging batteries.

Lithium-ion batteries, for instance, are commonly used in grid-scale storage to respond quickly to grid signals that there is a fluctuation in supply and demand, leading to deviations in grid frequency. These will put out high bursts of power for short times to keep the grid operating at as close to 50Hz (or 60Hz as required) as possible. Conversely, the same battery may not be suited for storing solar PV energy for several hours, perhaps for use at night, where something like a flow battery, capable of storing larger amounts of energy for longer durations may be better.

In a recent interview, the CEO of redT, a company that makes flow batteries (but prefers the term ‘flow machines’) Scott McGregor, told Energy-Storage.News that a theoretical hybrid energy storage system of lithium-ion batteries and vanadium redox flow could be optimal for delivering both high power and high energy functions within the same installation.

While the promise of lithium-flow hybrids sounds enticing, no significant projects along those lines have yet been built. However, recently announced hybrid systems include a flywheel-plus-battery project in the UK and a lead acid battery-ultracapacitor system in Ireland. On a slightly different tack, US engineering giant GE has launched hybrid gas turbine-plus-battery systems, some units of which have already been provided to a California investor-owned utility (IOU).

As Navigant points out, pairing together different types of energy storage technology within the same system has the potential to deliver better power capacity, energy duration and cycle life. Well-designed and modelled hybrids could lower costs, increase efficiencies and system lifetime, as well as contributing to the versatility of system applications.

However, as Navigant report lead authors Ian McClenny and William Tokash go on to say in their report, it is a complex task to deploy energy storage hardware such as power converters and inverters – as well as software – that can manage two sets of energy storage technologies. The ultimate question, and one that will keep being asked and answered as deployments increase, is whether the hybrid system can compensate for that complexity and cost in the things it can do.