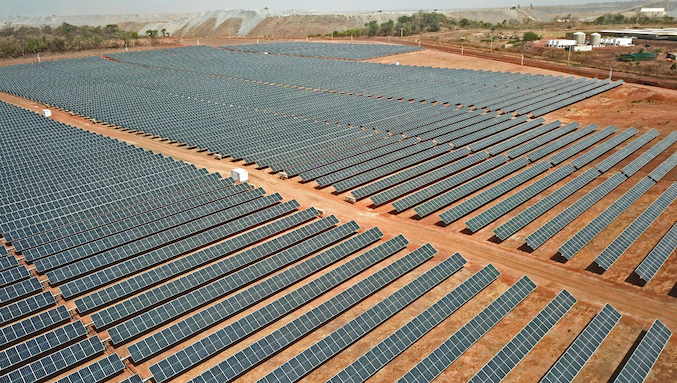 Malian mines produced 66.5 tonnes of gold in 2020, making it the third biggest producer on the African continent, according to the country’s Ministry of Mines, Energy and Water. The Fekola mine is in operation 24 hours a day and so while it will continue to rely on six generators that run on heavy fuel oil, during the day the project’s solar array will allow for three of those to be shut down and the use of the other three greatly reduced.

The hybrid solution, which includes 30MW of solar PV and a 17MW / 15.4MWh battery energy storage system, has been integrated successfully with the existing power plant onsite and developers Baywa r.e. and Suntrace said the solar plant “is on course to be 100% complete by the end of June”.

Baywa r.e. and Suntrace’s partnership was awarded the US$38 million project by the Fekola gold mine’s owner and operator, B2Gold, which gave approval in late 2019 after the two German companies submitted technical and economic feasibility study work.

At the time that approval was granted, Energy-Storage.news reported that the batteries will be largely used to compensate for short-term fluctuations in solar power output during the day, rather than being used to store energy from the day’s solar production for later use. Baywa r.e. said yesterday in a press release that it can allow up to 75% of the mine’s daytime energy use to be covered by solar.

“Integrating such a large amount of solar into a small, isolated grid safely and reliably has been a major technical challenge and required the use of battery storage as well as a tailor-made control system. This was conceptualised in the early stages of the project and we ensured that our vision was implemented accordingly by the suppliers,” Baywa r.e. project manager Thorsten Althaus said.

“It is extremely rewarding to see how well this solution performs in reality and shows that the technology works and is just waiting to be applied on further projects.”

“We are very proud that B2Gold has entrusted Suntrace, together with BayWa r.e. as Engineering and Procurement contractor, to support the development and implementation of this innovative project,” Suntrace COO Martin Schlecht said.

“Thanks to excellent team work with B2Gold and BayWa r.e., we were able to manage the completion despite the global challenges that the COVID-19 pandemic imposed on all of us. We are proud to jointly deliver a functioning project, well integrated with the mining operations, which reduces CO2 emissions from power generation for the Fekola mine by roughly 20%.”

In December 2019, energy solutions technology provider Wärtsilä was revealed as the system integrator and supplier of the hybrid energy solution. Wärtsilä said then that it has done similar projects in the off-grid commercial and industrial space including at a goldmine in Burkina Faso. The hybrid incorporates Wärtsilä’s GEMS software and controls platform, which uses AI to control and optimise the battery and other assets, as well as dispatching or drawing energy according to conditions such as generation and demand profiles and market opportunities.

“Suntrace and BayWa r.e. have played a vital role in our work towards more sustainable production at Fekola. The implementation of a solar-battery hybrid system was an obvious choice to help achieve this, not only for its environmental credentials, but also its economic viability,” B2Gold’s senior VP Dennis Stansbury said.

“This is a landmark project which we expect to pave the way for more sustainable power generation within the mining industry in West Africa.”

Elsewhere in the world, mobile power solutions provider Aggreko celebrated the completion of a similar project at Granny Smith, a gold mine in Western Australia, near the end of last year. Aggreko said that project was notable not only for the technologies used, but also for the fact that the 8MWp solar array and 2MW / 1MWh of battery storage integrated with existing natural gas capacity is being rented to the customer rather than sold.

Other recent examples include Saft’s project at Agnew gold mine, also in Western Australia, completed last year combining wind and solar with 13MW of battery storage and gas and diesel engines for backup, while mining giant Rio Tinto is developing yet another hybrid system in Western Australia, this time at an iron ore mine. Back in Africa, an alloys mine in South Africa is getting a vanadium redox flow battery, which will use locally sourced vanadium electrolyte.

This article has been amended from its original form to add a quote from Suntrace COO Martin Schlecht.