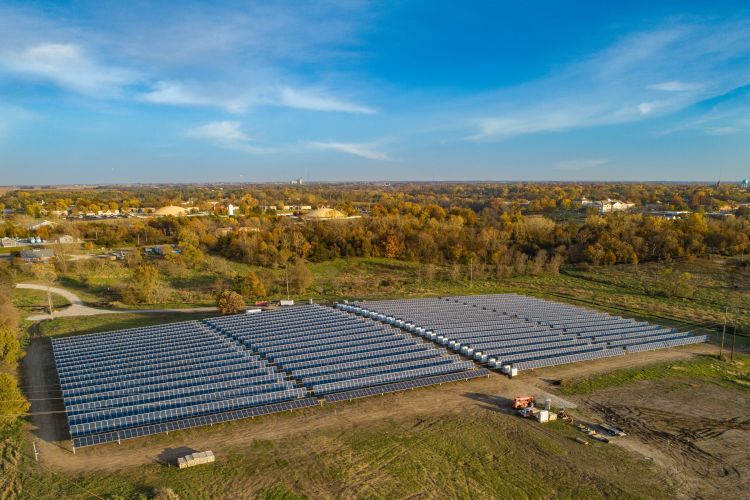 The university’s new solar and storage power plant, along with two smaller PV arrays and a small wind turbine, will bring the university’s renewable energy share to 43%. Image: Ideal Energy

Fairfield, Iowa’s Maharishi University of Management has completed and powered up a new solar power plant in mid-December. Designed and installed by Ideal Energy, it is the first system of its kind developed within the mid-western US state.

The installation features both single-axis tracking and vanadium redox flow battery energy storage. The 1.1MW EXTracker NX Horizon single-axis tracking array uses motors and a predictive algorithm to rotate solar panels throughout the day, following the sun's path, generating around 15% more energy on a yearly basis than a fixed-tilt array of similar size. Nextracker NX Flow Avalon batteries are utilised at the site.

The project also includes a 1.05 MWh battery energy storage system, which helps to cut energy costs by peak shaving i.e. reducing the amount of power drawn from the grid at expensive peak times, which can significantly reduce non-residential electricity costs and has thus far been the biggest impetus in the US for commercial and industrial (C&I) energy storage deployment.

The university's new solar and storage power plant, along with two smaller PV arrays and a small wind turbine, will bring the university's renewable energy share to 43%. These installations will cover 33% of the campus’ total electrical needs.

Iowa congressman Dave Loebsack said: “One of the more exciting things about this particular project is the battery storage aspect. This is leading us to the point where solar can be part of our base load capacity. If we can not only generate electricity throughout the day, but also store it so that we could use solar energy 24 hours a day, then it is by definition part of base load. And that is really exciting.”