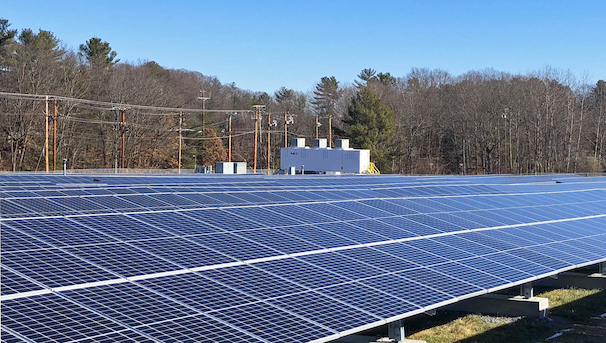 NEC-supplied energy storage system (ESS) can be seen in the background of the Amesbury landfill site solar-plus-storage project, which EPC CS Energy worked on with developer Kearsage. Image: CS Energy.

Adding well-optimised energy storage to solar PV projects in the US state of Massachusetts can increase project revenues by up to 50%, Stem Inc has claimed, as the energy storage provider announced the completion of a front-of-meter solar project with 8MWh of storage.

Energy-Storage.news reported last July as Stem Inc announced the formation of a partnership wth private equity firm Syncarpha Capital to develop 28.2MWh of energy storage projects colocated with solar PV in Massachusetts. This week Stem Inc, which touts the artificial intelligence (AI)-driven capabilities of its storage systems, said that the project is the first of five from the pair to be completed.

The just-completed project, in Blandford, near Springfield, MA, is one of four AC-coupled front-of-the-meter projects Syncarpha and Stem are collaborating on, with one DC-coupled project rounding off the portfolio. PV generation capacity of the Blandford site is just under 5MW, Stem said. It also marks Stem’s first project as an independent power producer (IPP). Syncarpha Capital meanwhile has also struck a deal with ENGIE Storage for a 19MW / 38MWh community solar-plus-storage portfolio in the state, for which ENGIE will supply storage and control systems.

Energy storage deployment in Massachusetts has been driven by a number of supportive policies. The state has a target in place to deploy 200MWh of storage by the end of this year and 1,000MWh by 2025. In a recent interview, Jason Burwen, policy director of the national Energy Storage Association told this site that the state’s leaders, including Governor Charlie Baker, have chosen to pursue that target “not through a single energy storage policy” but “through distributing energy storage into many different programmes and feeding it through those” in an interview on state-level targets for storage published this week.

One major programme is the Solar Massachusetts Renewable Target (SMART) scheme, which incentivises solar installations with rebates and sets a 3.2GW target for PV. SMART now also stipulates that solar PV systems over 500kW need to be combined with storage, with an increased incentive added to match.

The state also has in place the Clean Peak Standard, thought to be the first policy of its type anywhere in the world. It stipulates that a percentage of the power used by utilities to meet customer demand at peak times has to be from clean and low-emission sources. ESA’s Jason Burwen said that “it remains to be seen exactly what that programme will produce,” that if it went well, other jurisdictions may follow and that the state’s lawmakers deserved credit for trying a first of a kind policy that no one else has yet tried to do.

The front-of-meter system can deliver energy, capacity and ancillary services on a market basis in this way. Behind-the-meter projects in the state can also earn extra revenues through enrolment in demand response programmes and managing their own demand charges, while battery storage also offers some scope to do energy arbitrage.

China's Sungrow said back in October last year that it was supplying storage systems to Stem's portfolio with Syncarpha. Going forwards, California-headquartered Stem has signed up to another solar-plus-storage partnership with NEC’s battery storage division to extend its reach on the East Coast of the US, but this seems to have come to a halt with the news that the Japanese corporation’s Massachusetts-headquartered subsidiary NEC Energy Solutions is exiting the energy storage sector. NEC had been the first company to deploy standalone battery storage in the state back in 2016 and said last year that unsubsidised energy storage projects were also now possible there. Stem Inc declined to comment on the news of NEC's exit or the future of any projects planned by the pair for this site a few days ago.

Coincidentally, engineering, procurement and construction (EPC) company CS Energy put out a press release today saying that it had worked on a Massachusetts solar-plus-storage project with New England-headquartered renewables developer Kearsage, which had been supplied a 3.8MWh battery system by NEC. The project, at a landfill site in the city of Amesbury, was completed in January, as reported by Energy-Storage.news at the time.

The Amesbury project also received support from the SMART programme and CS Energy’s director for energy storage Sean Harrington said the company is “strategically scaling up our energy storage division and growing our register of successfully completed projects”.