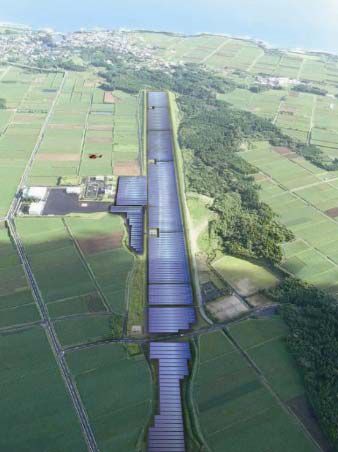 Greenko said that it will be helped along with plans to build multiple gigawatts of renewable energy plants alongside energy storage in India by an investment from Tokyo-headquartered ORIX Corporation.

ORIX Corporation will take a “significant” minority stake in renewable energy company and power producer Greenko Energy Holdings. Greenko said last week that ORIX is set to make an investment of at least US$980 million to acquire at least 20% of the Hyderabad-headquartered company’s issued shares.

Greenko has been valued at around US$5.75 billion through the transaction, and existing investors in the company include Singapore’s GIC and a subsidiary of the Abu Dhabi Investment Authority (ADIA).

ORIX Corporation, which is at root a financial services company but has branched into many areas including renewable energy project development and asset management, has 873MW of operating wind power assets in India. These will pass into Greenko’s portfolio following the transaction.

ORIX head of energy and eco-services business HQ Hidetake Takahashi said that the partnership with Greenko represented a “very important step for us in accelerating our corporate strategy of contributing to build a sustainable society,” describing Greenko as a “leading renewable platform in India which has become one of the largest renewable markets in the world”.

Greenko is focused on competing with conventional energy assets through a strategy of building what it has dubbed Integrated Renewable Energy Projects (IREP) with energy storage, managing director and CEO Anil Chalamalasetty said. According to Chalamalasetty, IREPs with energy storage can compete with old-fashioned generators in terms of “quality, quantity and cost”.

A tender win Greenko achieved earlier this year for 900MW of solar paired with pumped hydro energy storage as part of a 1.2GW procurement by the national Solar Energy Corporation of India (SECI) appeared to bear out this assessment. It is not yet clear how much of the IREP pipeline's energy storage will be provided by batteries or other technologies, with Greenko recently appointing consultancy AFRY India for design consultancy work on the Pinnapuram Pumped Storage Project in Andhra Pradesh, southern India, which will be combined with a nearby 2,000MW solar farm and 400MW wind energy plant and connected to the grid.

Greenko said that it has received permits for the building and operation of “multiple IREPs across five states in India with an overall daily and seasonal storage capacity of around 40GWh”. At the moment, the company has more than 8GW of renewable energy projects, including wind, solar and hydropower under construction, including two IREPs. Its portfolio of present operational capacity will be at about 6.5GW with the addition of ORIX’s wind capacity.