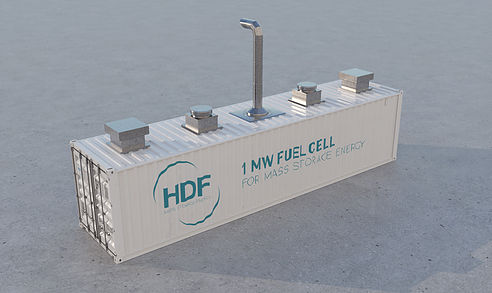 A hydrogen ‘power station’ which includes 15MWh of batteries as part of a total 140MWh of renewable energy-charged energy storage, will be built on French Guiana by Hydrogène de France (HDF Energy).

The power station, dubbed the French Western Guiana Power Plant, will combine a 55MW solar farm with 140MWh of energy storage. An HDF Energy spokesman told Energy-Storage.news today that this includes 15MWh of battery energy storage, with the rest made up of hydrogen fuel cells. The solar farm’s energy output will be made dispatchable so that the island can benefit from renewable energy 24 hours a day.

HDF Energy said earlier this week that it has signed an Independent Power Producer (IPP) type contract with utility EDF for energy generated by French Western Guiana Power Plant. Local authorities and public agencies have determined that the west of French Guiana has an energy shortfall of about 20MW, which this project aims towards mitigating.

The HDF representative told Energy-Storage.news that rather than with ‘traditional’ renewable energy IPPs, where a developer builds a project and finds a long-term off-taker, instead for this project HDF surveyed the customer’s needs and proposed a solution based on those long-term projections.

The solution, which HDF Energy calls ‘Renewstable’ (‘renewable energy + stability’), will generate a fixed output of 10MW each day from morning until evening, and 3MW in the evenings. With hydrogen fuel cells capable of producing energy steadily 24/7, the majority of dispatchable energy from the system will come from those.

Batteries for power, hydrogen for energy

Meanwhile, the HDF Energy spokesman said, the battery energy storage system (BESS) portion of the facility will be used for applications that require short durations of high power, to smooth the variable output of the solar farm to make it ‘grid-friendly’. It will also be used to provide energy into the evening peak, between 6pm and 8pm each night, when PV production has stopped and demand ramps up for a brief period. The battery and the hydrogen are acting “quite differently” in this case, playing almost separate roles, the spokesman said.

“The main difference between battery and hydrogen is that in a battery you are quite connected between the power and the energy, they are fixed. On the hydrogen side it’s completely disconnected, the power and the energy. To add more energy you just add tanks, to add the volume of hydrogen you are storing. The power side however is fixed,” the HDF representative said.

“Our electrolyser is around 16MWh and 3MW [of] fuel cells on the other side. So we can produce the 3MW continuously for 24 hours a day and when needed we are using the PV plant and battery to enhance that to 10MW.”

French Western Guiana Power Plant will be connected at an EDF substation in the commune of Saint-Laurent- du-Maroni. HDF Energy claims the power station can act as reliably as “traditional [power] plants”, but without greenhouse gas emissions.

The HDF spokesman said while the batteries in the combination facility could be used to provide ancillary grid services, this was not called for in the business model that the project is being based around.

While France as a nation has put in motion tenders to deploy large amounts of solar-plus-storage on various island territories, this latest project falls outside the scope of those off-grid solicitations. That 20MW deficit of energy on French Guiana needs to be deployed within five years, according to local authorities. The Western Guiana facility’s multi-annual PPA with EDF has been “inked and validated” by the French government, the HDF Energy spokesman said.

Work will begin on the project in the summer of 2019, to be commissioned in Autumn 2020. It will create around 100 jobs during construction and around 30 permanent jobs once it is up and running. HDF said it is working with a global manufacturer to develop next-generation fuel cells which the company said will be assembled in France and has plans for further ‘Renewstable’ projects in 12 more regions.