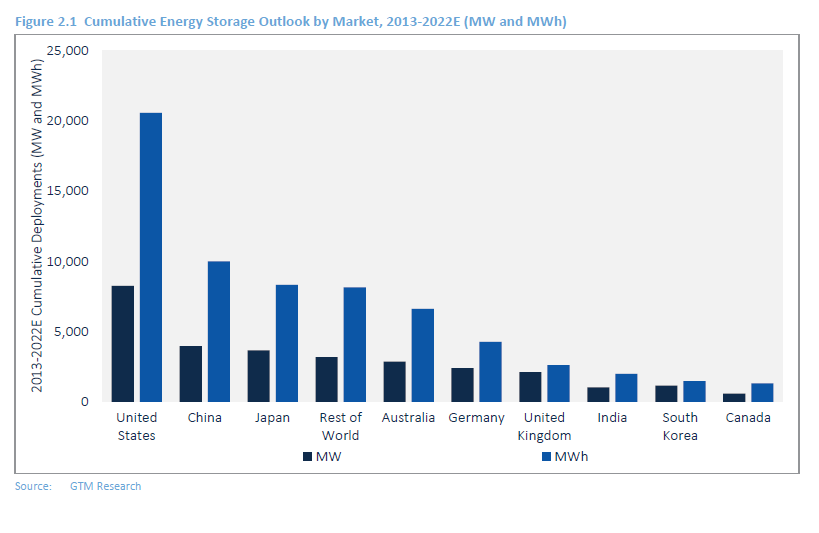 The US is expected to remain the world’s biggest market for energy storage until 2022, with China its closest rival, GTM Research has said.

The US-headquartered firm has just published an overview of the global industry in 2017, in a report which also carries GTM’s forecasting of market trends and expected deployment through to 2022. In fact last year’s leader for installations by power was Australia, commissioning 246MW energy storage power capacity, with the US leading in energy, with 431MWh added.

In total 1.4GW / 2.3GWh was installed worldwide in what the report’s authors Ravi Manghani and Rory McCarthy said had been “one of the most exciting years yet for energy storage”. While focused on the entire world, GTM picked out Europe, the UK, North America, South Korea and Australia to be notably fast-moving.

In Europe, grid services markets in the UK and Germany really led activity in the sector, including what GTM described as “shockingly low clearing prices” of as little as £7 per MWh (US$9.9) for frequency response services in Britain’s 200MW enhanced frequency response (EFR) tender, held in 2016 with projects starting to come online last year. Going forward, as regular readers of this site will also know, a great deal of uncertainty exists regarding overhauls to grid service procurement by the transmission operator, National Grid.

Germany deployed 135MW in power capacity of batteries, the UK 117MW in 2017. Going forward, GTM said changes including unified European Network Codes which could harmonise frequency markets across Europe are expected to appear. Central and northern European markets including Austria, Belgium, France, Germany, The Netherlands and Switzerland are coupled, and – as Energy-Storage.News heard from German politician Thorsten Herdan recently, big things are expected in terms of the interconnection this provides as well.

The US saw “renewed diversity in state markets” throughout 2017, which created market momentum, according to GTM. In other words, while the bulk of deployment for 2017 in the US was delivered in a single record-breaking first quarter, with 234MWh installed mostly in California as part of the wave of expedited projects to add capacity in the wake of the Aliso Canyon gas leak, activities in states such as Massachusetts and New York, which set energy storage procurement targets and added storage to long-term grid-planning in Arizona and again California, also drove the market forward.

Having said that, California deployed 73% of all behind-the-meter storage in the US last year and ongoing battles between natural gas plants used as peakers and battery energy storage which resulted in the state regulator CPUC advising grid operator CAISO that utility Pacific Gas & Electric (PG&E) should procure distributed resources including energy storage through competitive solicitations.

In terms of the other big markets picked out for special focus, GTM said that South Korea is racing successfully towards meeting a 500MW energy storage target for the grid set by monopolistic utility Kepco back in 2014. The target was to be met with projects individually of between 16MW to 48MW each. GTM found that by the end of last year, more than 370MW was already deployed across 13 projects with 112MW of those added during 2017 in the third or four planned deployment phases. Perhaps unsurprisingly in a country host to the likes of battery makers LG Chem, Samsung SDI and lesser known but still significant players like Kokam, GTM said “all projects to date have employed Korean batteries and power conditioning systems.

Finally, GTM picked out Australia’s residential market as another segment enjoying strong growth. While Germany is also increasing in installed base year-on-year, helped by a subsidy programme that helped it reach 80,000 installed systems by the end of 2017 and the rest of Europe is gradually ramping up, Australia’s high electricity prices and expiring feed-in tariffs have made it the world’s biggest residential storage market, tripling in size during last year.

In the future, China is going to become the world’s second biggest market for stationary energy storage, GTM said, in a field still led by the US, in an annual market that Manghani and McCarthy forecast will be 8.6GW / 21.6GWh in size by 2022.