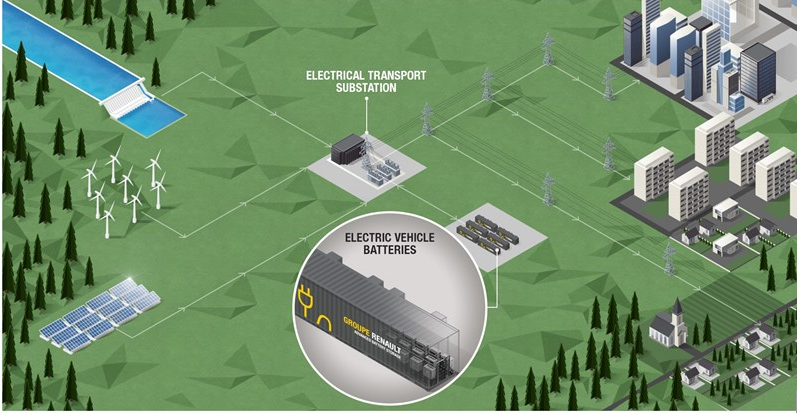 The EV batteries are to provide 20MW of flexibility to Germany’s grid. Image: Groupe Renault/Demeter

A battery storage project using second-life electric vehicle (EV) batteries is set to be built in Germany, with an aim of developing an installed capacity of 20MW.

A new joint project company has been set up to run the project between Groupe Renault, The Mobility House, Mitsui and Demeter, which has provided investment via its private equity fund, the Fonds de Modernisation Écologique des Transports.

The project is being billed as the largest stationary electricity storage system using EV batteries in Germany, following on from an initial 45MW project in France. Energy-Storage.news has requested information on the capacity in megawatt-hours of the new system, which has as yet not been given.

The stationary storage system is to be built using EV batteries compiled in containers, using both second-life batteries and new batteries stored for future use in standard replacement during after-sales operations.

The batteries are being provided by Groupe Renault and the storage capacity is to be sold by The Mobility House to support network services and industrial storage needs such as load management and backup power.

It forms part of the ‘Advanced Battery Storage’ project first announced by Groupe Renault in September 2018.

The project was developed with an aim of creating at least 60MWh of capacity, with over 2,000 EV batteries.

Philippe Detours, general partner at Demeter, said Demeter is “proud” to be working with Groupe Renault, The Mobility House and Mitsui on the project and reinforces Demeter's position “at the forefront” of electric mobility and storage projects, energy efficiency, industrial energy efficiency and the circular economy.

In the initial announcement of the project, Nicolas Schottey, director of the Groupe Renault New Business Energy program, said the project aims to offset differences between demand and consumption and the high power combined with the high capacity will allow the system to “ react efficiently to all major grid solicitations.”

In 2017, Renault confirmed plans for a feasibility study alongside Nissan into using batteries for EV storage and later that year launched an energy services subsidiary with a focus on smart charging solutions for EVs, vehicle-to-grid and second-life batteries.

Nissan has also partook in several other storage projects using second life EV batteries, including a 10MW system in Japan and a commercial-scale project in the US.

A consortium including Daimler and The Mobility House – the latter of which is working on the Advanced Battery Storage project – previously built what was claimed to be the world’s largest stationary storage facility using second-life EV batteries in 2016.

The consortium for the 20MW project was advised by Watson Farley & Williams, with Laurent Battoue, regulatory and project partner at the firm, describing it as a “ground-breaking” project.