A survey of over 2,000 “senior business leaders” in G20 countries has found that electric vehicles and battery storage are the most popular assets to invest in among non-power generation technologies in the energy sector.

The law firm, which specialises in the energy sector, said it found a disparate and wide range of views on what the energy transition really means among its 2,090 respondents, from 110 firms with an average global turnover of US$15 billion and an aggregate sum turnover of over US$30 trillion.

Energy efficiency and conservation was the most popular answer in terms of the respondents’ interpretation of the transition, with energy storage and renewable energy implementation closely following. Energy efficient infrastructure or buildings and smart electric meters were also highlighted for their importance. Ashurst said it believes there should be more alignment of consensus among the business community as this will give “more clarity on what needs to be done”.

Respondents said government is the biggest “source of pressure” on the need to decarbonise towards net zero economies, but also noted a variety of other agents including NGOs, employees, regulators, media, competitors and institutional investors.

The report notes that its findings were compiled before the declaration of the COVID-19 pandemic. but the authors believe that the “fundamentals of the market and prospects for the clean energy transition will remain largely unchanged longer-term”.

Smart meters and hydrogen were also shown to be prominent in the pattern of present and planned investment with 41% and 40% of respondents respectively going for those other non-generation energy technologies.

India is the G20 country where business leaders most keenly “perceive the energy transition as essential to growth”, followed by Mexico and South Korea being tied in second place and China, then Italy, then France rounding off the top five. Australia and the US came in joint 12th, while Saudi Arabia is 20th. Saudi Arabia however had the highest percentage of respondents of any country (60%) that had already invested in hydrogen technologies. India’s position as leader was closely linked to the fact that 66% of respondents have already invested in or plan to invest in EVs.

“The effects of climate change can no longer be ignored. Addressing its impacts has become a priority for businesses, governments and individuals alike,” Antony Skinner, Ashurst global co-head of power & utilities said.

“As the energy transition takes place, with increasing emphasis on cleaner and renewable technology, energy supply is under more scrutiny than ever before. Some parties have a first-mover advantage while others are taking their first, tentative steps in their contribution to a carbon neutral economy.”

According to the survey and report, nearly all of the respondents said they expect their organisation will increase its low-carbon investments, while the average expected increase in dollar terms will be 43%. 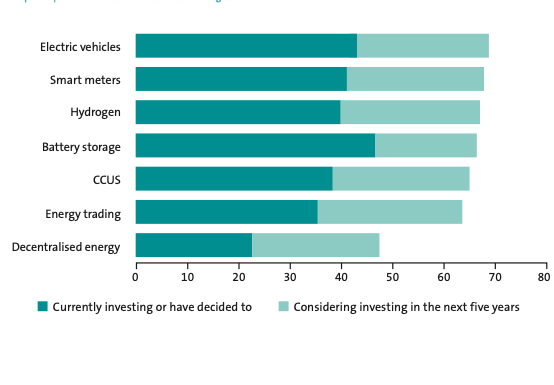