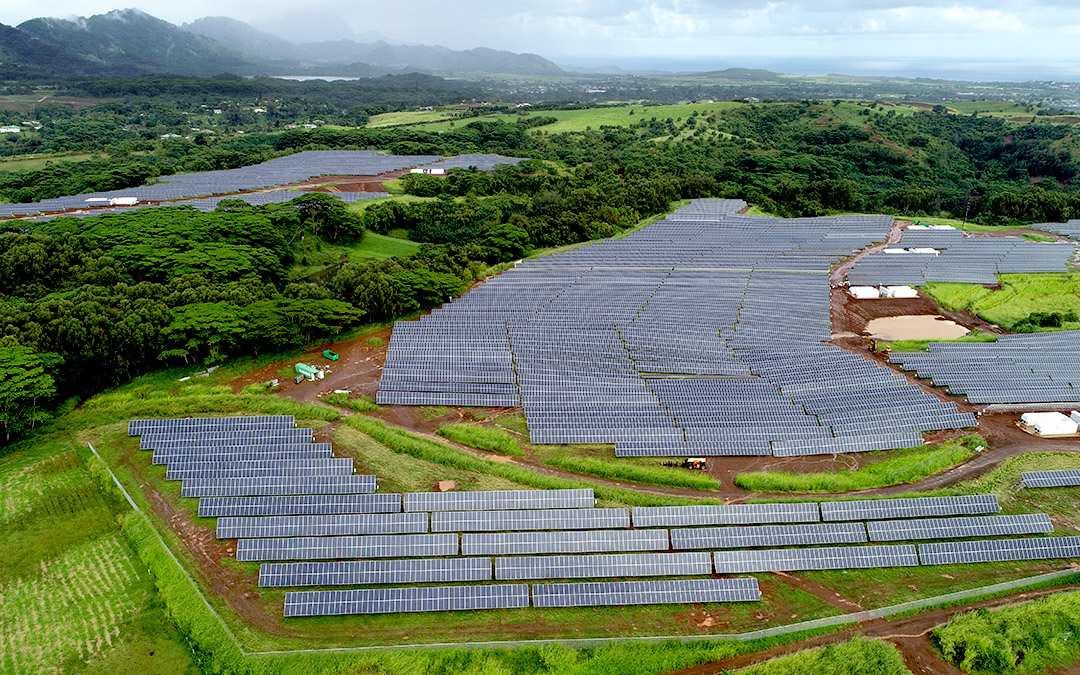 Lāwa’i Solar and Energy Storage Project on the island of Kaua’i. Image: AES.

While a tranche of seven solar-plus-storage projects under proposal in Hawaii would see renewable energy make its biggest competitive play against fossil fuels in the US island state so far, a project just completed will deliver energy well into the evening at just US$0.11 per kWh.

Energy-Storage.news reported earlier this month that Hawaiian Electric Company-awarded contracts for 1,048MWh of energy storage to pair with 262MW of PV and has now put them up for approval before the regulator, the Hawaii Public Utilities’ Commission (PUC).

Those projects have garnered attention already for their low cost – ranging from US$0.08 per kWh to US$0.12 per kWh under long-term power purchase agreements (PPAs) – and the relative long duration of storage – four hours – that each will be equipped with.

Meanwhile, toward the end of last week, AES Distributed Energy announced the completion of Lāwa’i Solar and Energy Storage Project on the island of Kaua’i for local provider Kaua’i Island Utility Cooperative (KIUC). The facility, which AES has dubbed a “PV peaker plant”, is a 28MW PV power plant and 100MWh of lithium battery energy storage, allowing for five hours of storage.

An AES spokeswoman confirmed to Energy-Storage.news that energy from the plant will be sold to KIUC for the price agreed two years ago when the project began development: US$0.11 per kWh. Recent reports have put a figure on fossil fuel-generated electricity, usually from diesel, on Hawaii’s islands at around US$0.16 per kWh. Over 3.5 million fewer gallons of diesel would be imported onto Kaua’i as a result of the project’s contribution, AES has said. Energy-Storage.news reported in June that the low price had been secured on a 25-year term PPA.

The AES representative also drew attention to the fact that the plant, inaugurated on 8 January, will be able to “release peaking thermal generation”. The solar-plus-storage facility can output energy between early morning peaks from around 6am to 9am, as well as, more crucially, between 4pm and 10pm as demand peaks and the contribution of solar to the grid’s generation mix has diminished. The battery will also be able to provide ancillary services to the grid such as frequency response, again a function traditionally supplied by thermal generation.

Hawaii, in common with California, has the goal of generating 100% of its electricity from renewables by 2045. According to AES, the addition of the new Lāwa’i plant will bring Kaua’i renewable proportion to over 50%, with the 28MW PV / 100MWh facility set to contribute around 11% of the island’s electricity. Hawaii has long been seen as an ideal test bed for the growing importance of solar-plus-storage, even before the implementation of targets.

AES meanwhile is currently also developing a further 19.3MW PV plant with 70MWh of battery storage for KIUC, contributing to a quoted 128MW of solar-plus-storage the company has under construction and over 250MW in “late-stage development”.