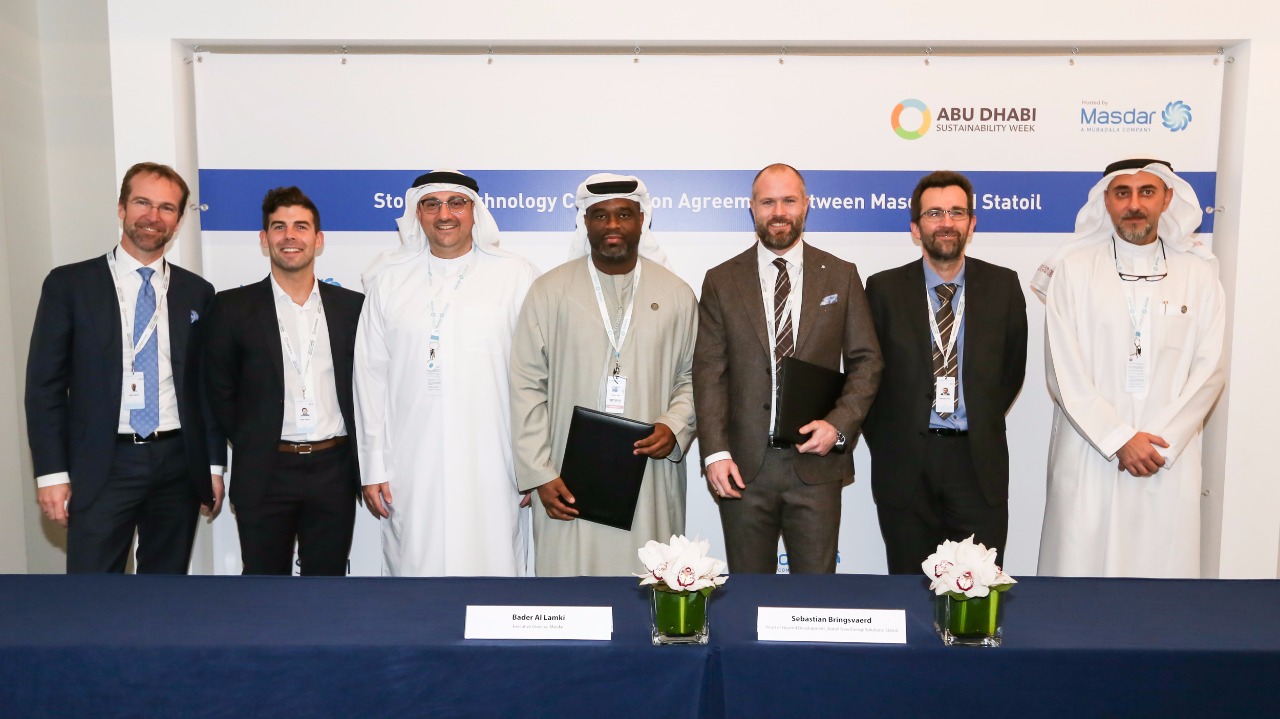 The agreement was signed by Masdar and Statoil at Abu Dhabi Sustainability Week 2018, currently taking place until 20 January. Image: Masdar.

The real-world performance of batteries paired with “Hywind” – the world’s first floating wind farm – will be analysed by the wind project’s owners, Masdar and Statoil.

Batwind, as the battery part of the project is known, pairs six 5MW Siemens Gamesa wind turbines with 1MW/1.3MWh of batteries, with system integrator Younicos deploying the energy storage solution, as reported by Energy-Storage.News in November 2016. The project was green-lit in March that year, after the signing of a memorandum of understanding (MoU) between parties including Statoil and the Scottish government.

The wind project floats on the North Sea some 25km off Scotland’s eastern coast. Oil and gas multinational Statoil and Masdar, the Abu Dhabi-headquartered sustainability advancement group backed by the United Arab Emirates government, own 75% and 25% stakes in Hywind respectively.

The batteries themselves sit onshore at an existing substation. They are intended to maximise the energy output from the Hywind turbines by mitigating peaks and troughs in production, storing surpluses at times when the grid is at or near full capacity and unable to accept further injections of electricity.

In such instances it is becoming common practise in many parts of the world for grid operators to necessitate the curtailment of energy from wind turbines going on to their network, resulting in energy being ‘wasted’. Many industry figures have said that energy storage could be a workable solution to this problem, which can have an impact on the returns generated by investment into wind energy assets.

Bader Al Lamki, executive director for clean energy at Masdar and Statoil’s Sebastian Bringsværd, head of Hywind development in the New Energy Solutions division of the company, met at Abu Dhabi Sustainability Week a few days ago and signed a “collaborative agreement”.

Under the terms of that agreement, Statoil and Masdar will analyse data from Batwind, not only to judge its performance to date but also to “explore the battery’s potential for further applications and business opportunities”, a joint statement issued by the two parties this morning read.

The pair have committed to extending their ownership of the overall project to include purchase of Batwind, to cover installation and testing. As well as assessing how well the battery system works specifically in improving operational and cost efficiency of offshore wind farms, Statoil and Masdar will use the “high level of operational data” collected to explore the potential for integrated or co-located battery systems at wind or solar power generation sites.

With more renewables coming into production it will be crucial to handle storage to ensure predictable energy supply in periods without wind or sun,” Statoil and Hywind’s Sebastian Bringsværd said.

“Batwind has the potential to add value by mitigating periods without wind – and by that making wind a more reliable energy producer [all] year around. This could expand the use and market for wind and renewables in the future.”

Bader Al Lamki of Masdar said that the project “has the potential to deliver far-reaching benefits in the development of renewables as a baseload power source”.

“The intermittent nature of solar and wind energy pose challenges for dependable power supply and grid stability. Energy storage is key to overcoming these challenges and unlocking the full potential of renewables,” Al Lamki said.