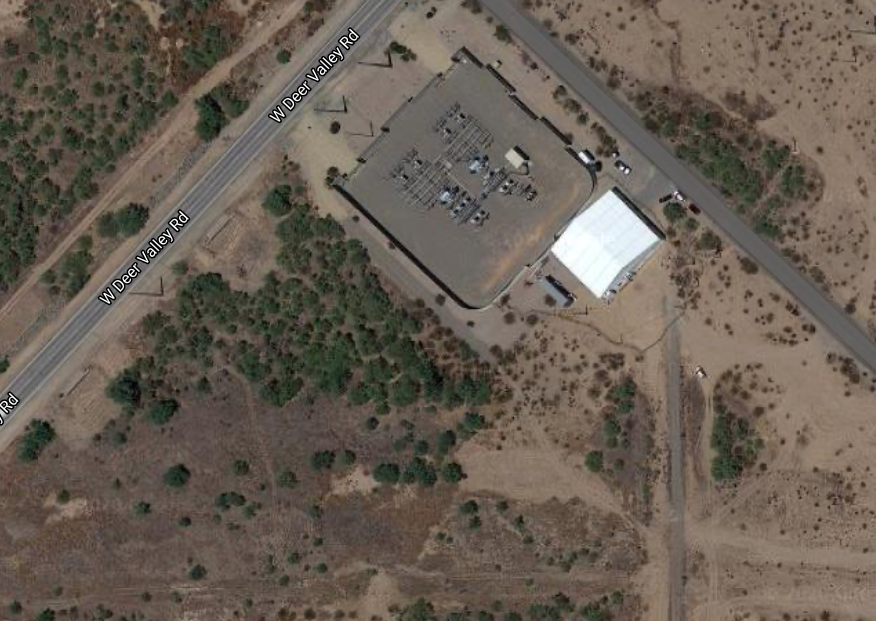 Google Maps aerial view of the McMicken substation facility. Utility APS put a tent up around the ESS after the incident to preserve the scene for investigators. Image: Google Maps.

More up-to-date training could have prevented severe injuries sustained by four firefighters in the April 2019 fire and explosion at battery storage facility in Arizona, according to a report into the incident from UL Firefighter Safety Research Institute (UL FSRI).

The Institute a few days ago published the report as part of a series of studies into line of duty injuries and near-misses experienced by firefighters, described by UL FSRI as a research effort “to capture the experience of surviving firefighters to better understand a potentially devastating situation”.

The report found that while the first responders acted “in accordance with best practices” information available to them at the time and the team’s leader had sought out some extra training for dealing with lithium-ion battery fires, HAZMAT training as well as site-specific safety guidelines did not prepare them adequately for the situation.

The UL FSRI study was carried out separately to that DNV GL report and other reports from investigations into the incident and was written fully from the experiences of the team of emergency responders to the fire and explosion.

While the DNV GL incident report described the chain of events as “preventable” with the implementation of installation and design safety standards as well as rigorous quality controls on equipment including battery cells, the UL FSRI study also found that better information and training for fire teams could have given them the knowledge necessary to avoid being injured. UL FSRI said that protective gear, including helmets, were removed by the force of the blast.

One firefighter was thrown around 75ft into a fence from the explosion, which occurred as their team opened a door to the battery enclosure. The four injured men suffered various injuries, including two sustaining traumatic brain injury.

An emergency response plan document intended to inform first responders of the risks posed by the ESS, supplied to fire department personnel by “representatives from the companies that designed and maintained the ESS,” apparently “did not provide guidance to first responders related to interacting with the ESS during a cascading thermal runaway event or fire, or information about the potential for an explosion hazard associated with thermal runaway”.

Responding to reports of a fire, the HAZMAT team of four had made a plan of action after conferencing with “a person on the phone who identified himself as an engineer from the company that designed the ESS system”.

After then measuring that carbon monoxide and hydrogen cyanide gases appeared to be at safe levels and observing that temperature was declining in the ESS’ ‘hot zone’, the door was opened, causing “gas/vapour” to flow out and shortly thereafter the explosion occurred. All four men in the HAZMAT team lost consciousness, and while three regained it while still at the scene, one required intubation while being taken away to safety.

Decision-making prevented worsening of the situation

Crucially, the report found that the situation was avoided from being made worse by the firefighters. This included the decision-making by a fire team captain who had gained experience with a fire involving lithium-ion batteries at an EV repair facility as well as getting reports from a maintenance engineer who helped the first responders to make the correct decision to elevate the response to include HAZMAT protocols. This “contributed to limiting exposure of the public and first responders to the hazardous gases and vapours emitted,” the report said.

The team also researched the situation and were in communication with project stakeholders throughout, which helped them get the best understanding they could of the possible hazards, which included the possible presence of harmful gases. However, with no way to remotely track the conditions inside the ESS or to remotely vent it, it was not possible for them to know whether batteries were offgassing and establish other safety parameters. The ESS communication system is also reported to have failed, making visibility into the system’s condition impossible.

During the incident, UL FRSI said, the HAZMAT team “reached the extent of knowledge and advice available from training courses and were required to formulate a plan to return the ESS to a safe condition”. It may have then appeared that the thermal runaway cascade and leak of gasses had subsided by the time the team decided to open the door in order to “quickly and effectively change the conditions inside the ESS”.

In common with some of the findings stated in the DNV GL report, some of the steps recommended by UL FSRI that could be taken to prevent such incidents are already becoming established practice within the energy storage industry.

These include safety standards, such as National Fire Protection Association (NFPA) standard 855 pertaining to safe installation and closer communication of how to deal with situations such as thermal runaway between parties installing systems and first responders.

Furthermore, all responding firefighters were trained to HAZMAT response competencies, but these “do not yet cover basic ESS hazards,” which the study recommends are added to the relevant curriculum. This emphasis on ESS safety should include awareness of potentially explosive nature of the gasses and vapours released during lithium thermal runaway events. The report, which can be found here, gives a further set of recommendations to prevent future tragic incidents.