There was a near-70% increase in capacity of operational energy storage projects in China paired with solar energy from 2018 to 2019, according to figures recently published by the China Energy Storage Alliance (CNESA).

The Alliance has just released a set of quarterly deployment figures analysing the energy storage industry around the world in 2020 so far, while also assessing the drivers for solar-plus-storage in 2019 and going forwards.

CNESA found that around 800.1MW of energy storage project capacity – including thermal molten salt as well as batteries and other technologies – was paired with solar in China by the end of 2019, an increase of 66.8% from figures taken at the end of 2018.

The Alliance’s in-house analysis team said 320.5MW of newly operational solar-plus-storage capacity came online during 2019 in China, a 16.2% increase on capacity added during the previous year. The vast majority of total capacity, 625.1MW, or 78.1%, was paired with centralised generation, with the remaining 21.9%, paired with distributed solar generation. 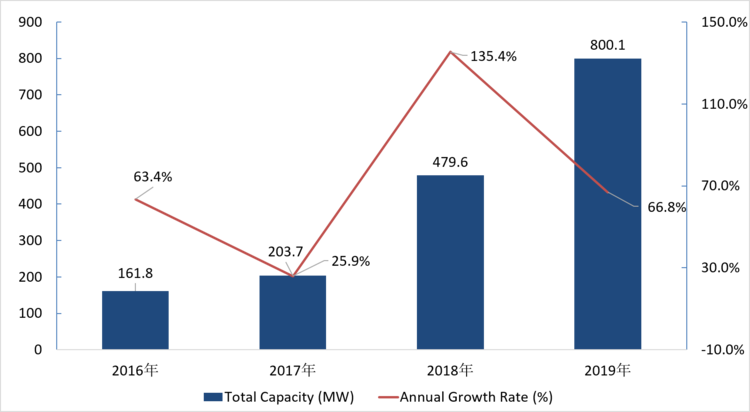 CNESA chairman Yu Zhenhua and senior research manager Ning Na said that with solar in China reaching “near grid parity” and the industry moving from a subsidised to unsubsidised model of deployment, energy storage could help confront the challenges of integrating variable solar generation and putting energy on the grid at times when it is most needed rather than at the time it is generated.

Nonetheless the Alliance believes that “as the global energy structure shifts to a high proportion of renewables and the large-scale development of solar PV, the solar-plus-storage model will become one of the primary models for energy storage development in the future, ushering in a huge potential new market for energy storage.”

This year, China is set to publish its 14th Five-Year Plan for its energy sector. The 13th plan period, which is just coming to an end, included the impact of the government’s first-ever policy statement on energy storage, the 2017 “Guiding Opinions on Energy Storage Technology and Industry Development” document. CNESA said that in the past five years, energy storage has “achieved rich results”, including “entering the early stages of commercialisation,” while the “critical value of energy storage to the energy system transition has now been demonstrated and verified”.

In March, CNESA had already reported a slowdown of the industry during 2019, although China still deployed around 519.6MW / 855MWh of new electrochemical energy storage. The Alliance attributed this to a “period of rational adjustment”. Then, in early April, CNESA said that many in the domestic industry felt the impacts of COVID-19 would contribute to a further slowing of the industry, including cost reductions as well as deployment numbers, although many respondents to a CNESA survey apparently believed the industry would bounce back in the second half of the year.