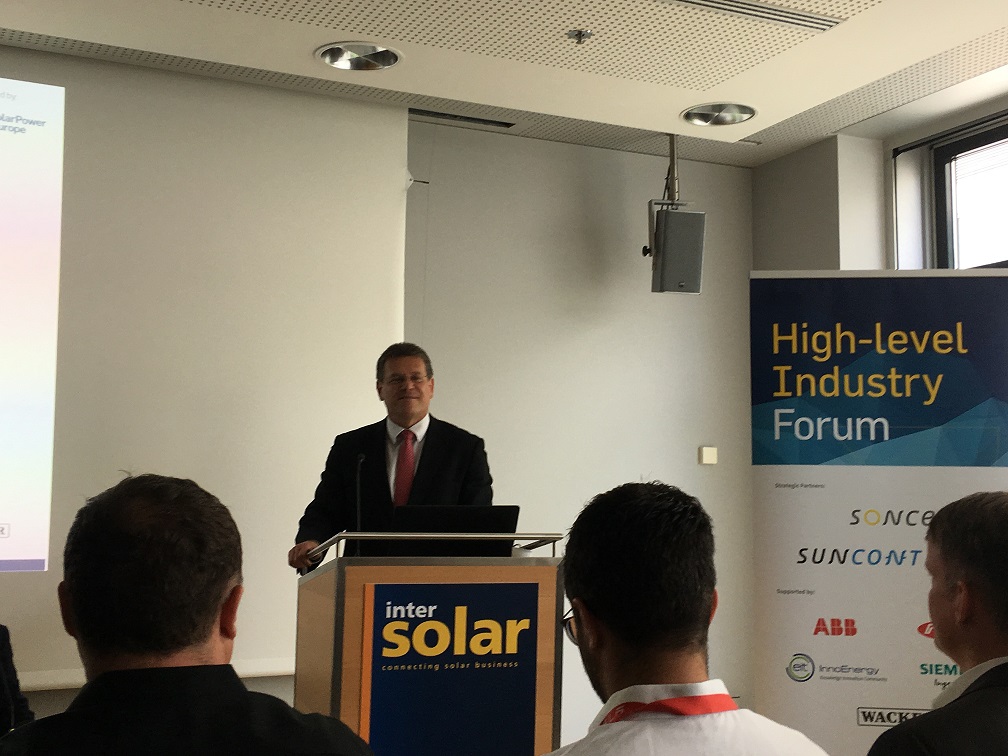 European Commission vice president for energy, Marcos Sefcovic has referred to an EU action plan for ‘green batteries’ to be made in Europe, citing the technology as vital for renewable energy integration as well as giving the continent a ‘competitive edge’.

At an industrial forum hosted at the Intersolar Europe conference centre in Munich on Thursday, Sefcovic was the invited guest of trade group Solar Power Europe, which hosted the event. His appearance followed opening remarks from SPE chief Christian Westermeier, who said that despite enormous progress and successes in the deployment of solar PV in the continent, there had historically been not enough effort made to support the whole value chain including manufacturing.

Conversely, measures such as trade disputes with China on module imports had backfired, resulting in sluggish downstream activity in some areas, while not having the desired effect of boosting upstream manufacturing, Westermeier said. Nonetheless, Westermeier credited the European Commission’s Renewable Energy Directive for its role in getting EU member states to a 100GW installed base of PV capacity today.

Westermeier also applauded the recent creation of an EU Battery Alliance, referring to batteries and energy storage as “vital” to the progress, development and deployment of solar. Westermeier concluded with the remark that EC Industrial Strategy legislation could bring about an “industrial renaissance”.

The EC’s Sefcovic, having called PV an “unlimited clean source of energy”, agreed that while there have been renewables success stories in Europe, there had also been failures, namely in that aforementioned lack of support for manufacturing across the whole value chain, meaning European makers have lost out “to our competitors”, Sefcovic said.

As with other shows in Europe this year, Sefcovic said it was good and important to see emphasis on sector coupling, where synergies between the areas of electricity, heat, cooling and transport can be fully capitalised upon.

Sefcovic mostly talked about batteries in context of electric vehicles (EVs), stating that European countries have to “be leaders in this important technology” and to “make sure the cleanest batteries are made in Europe”. Sefcovic said he was somehow taken aback that electric taxis in Brussels were Chinese made, making him think it was “high time we did something about that”.

Battery support strategies under the EC will, Sefcovic said, support the whole value chain. He even cited surveys that consider up to 13 EU states might be good sources of rare earth metals and other precious raw materials for battery production.

One of the overarching, cost-cutting aims of those strategies will be to hammer out relevant regulatory schemes and standardisation. The European budget, set every seven years and known as the Multi-annual Financial Perspective, will be putting in some €320 billion (US$368.71 billion) for clean energy industry development and around €120 billion through the Horizon innovation programme – although the latter could be shared across many industries.