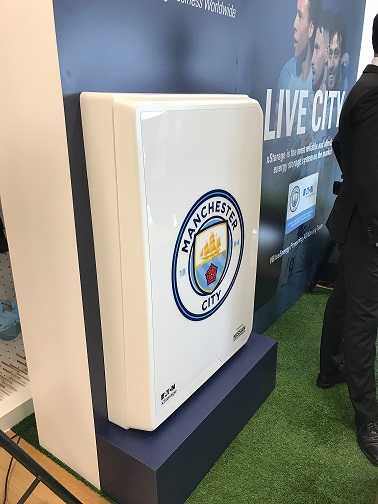 Eaton’s xStorage Compact is a single rack energy storage system designed for small and medium commercial and industrial (C&I) sites, enabling the installation of up to 50kWh of energy storage capacity per string of five battery packs. The systems are part of a wider range offered by the Dublin-headquartered multinational technology provider, along with residential and larger-scale solutions.

At present, the xStorage units perform behind-the-meter (BTM) applications for customers, with their principal aims including the integration of onsite renewable energy generation and allowing for the installation of multiple EV charge facilities. Eaton said this week that it has now teamed up with Finland-headquartered Virta to add new capabilities to the battery storage systems.

VPPs allow the capabilities and capacity from numerous distributed energy resources including energy storage to be aggregated together to serve as if one much larger resource, performing functions that might traditionally be done with centralised thermal power plants. Virta’s platform will enable energy storage in Eaton’s devices to be offered into balancing markets such as those offered by distribution or transmission network providers to help manage and maintain the grid. As well as energy storage systems, the batteries in electric vehicles can also be added to and managed by the platform.

The energy storage system owner benefits by receiving or sharing revenues earned by their systems in those markets, while the grid operators are able to manage their networks, often without having to invest in upgraded or new infrastructure. The need for balancing services grows in tandem with the growth of renewable energy capacity on electricity networks, with the output of wind and solar plants varying according to weather conditions.

While the Nordic region in which both Eaton and Virta are active includes Norway, where last year sales of new EVs outstripped all other types of car for the first time ever, markets for flexibility and demand response which enable the participation of distributed energy storage through virtual power plants have already opened up to a lesser or greater extent in regions including the UK, Germany and Australia.

Meanwhile other territories such as Japan and Canada have begun trialling such solutions at pilot or demonstration level. Perhaps the biggest anticipated future market will be in the US, where the Federal Energy Regulatory Commission (FERC) has issued two “landmark” pieces of rule-making: FERC Order 841, which commands the country’s main regional transmission operators (RTOs) and independent system operators (ISOs) to open up their wholesale electricity markets for distributed energy storage to participate, and FERC Order 2222, which was launched last year and orders those entities to do the same for a wider range of distributed energy resources (DERs) including solar PV, EV chargers and heat pumps. There have recently also been some utility procurements of capacity from aggregated behind-the-meter energy storage systems by major California utilities Southern California Edison (SCE) and PG&E, in PG&E's case with a collection of distributed systems at C&I sites while SCE gave a 5MW contract to residential solar (and now also storage) installer Sunrun.

“Eaton xStorage Compact units can be seen as a heart of building’s flexible electrical system which enables respectable use of electric vehicles with renewables and provides back up power locally. Now together with Virta, xStorage can produce new income to building owners from ancillary markets and still give response to local needs,” Eaton technical sales manager Marko Räty said.

“This is a win – win situation for building owner and national electrical grid where xStorage maximise and stabilise the local building’s energy use and EV’s peak demand while providing eco-friendly stabilisation power to national level electrical grid.”