Easing the risks of battery investment

Energy storage deployments are growing, with markets opening across the globe. These markets are recognising the value of storing energy at one point in time and dispatching it later. This is especially true in markets where solar energy is increasingly part of the grid and, due to its intermittent nature, can be disruptive. On a short time scale, storage can provide frequency regulation to balance the grid. But on long time scales it has a larger role, providing peaking capacity that can defer other more expensive investments such as distribution, transmission, or generation upgrades.

Both storage and solar have experienced significant declines in price over the last decade. Many markets are now observing that capacity bids from renewables are undercutting conventional fossil and nuclear generation. Not long ago it was thought that renewable energy was too expensive, and now fossil energy is too expensive.

Together, solar and storage are uniquely suited to provide energy to the grid and replace the function of gas generation plants. With tangibly lower capital costs, compared to just a few years ago, and no fuel cost over the life of the project, solar now offers a cost of energy that undercuts conventional energy. When coupled with storage, this energy can be dispatched at targeted times, and the instant response rate of the battery enables the entire plant to be flexibly designed for energy, capacity, or ancillary markets.

At the present rate, NCM/NCA Li-ion batteries will achieve US$100/kWh at the DC level before 2030 and will likely achieve 300Wh/kg. These rates appear linear; if greater compounding occurs, these metrics will be met much earlier. The main driver for this advancement is the increasing volumes of production driven by the automotive sector. 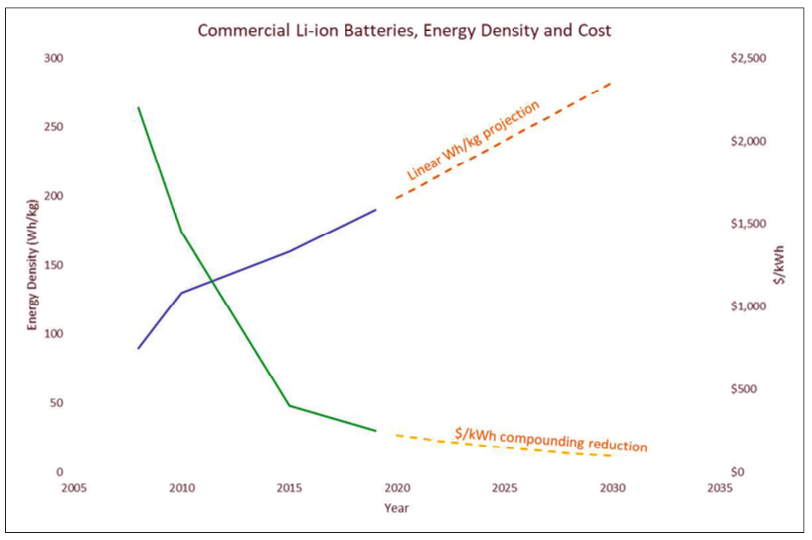 What to consider for storage

There are a number of considerations required when designing energy storage systems. The power and duration of the battery are determined by its purpose in the project. The purpose in the project is determined by the economic value. The economic value is determined by the market in which it will participate. That market ultimately determines how the battery will dispatch—what power, charge or discharge and for how long. The power and duration not only determine the capital cost, but also the lifetime.

In some markets, the storage system will get paid to charge and discharge. In others, it will just get paid to discharge, and the charging cost is a cost of doing business. The number of opportunities to charge and the rate of charge may be different from the discharge.

For example, in a utility-scale solar-plus-storage scenario, or in a behind-the-meter application with solar, the battery is creating value by charging while the solar is active, such that it qualifies its portion of the capital cost for the investment tax credit (ITC). This concept of storage getting “paid” to charge has nuanced differences from the way storage would get paid to charge for frequency regulation in a regional transmission organisation (RTO), like PJM, for example. In the ITC instance, the storage increased the tax equity value of the project and therefore the internal rate of return for the owner. In the PJM instance, the storage is getting paid for both charging and discharging and its compensation is therefore proportional to its throughput.

It may seem counterintuitive to state that the power and duration of the battery determines its lifetime. The inter- twining factors in power, duration, and lifetime are what makes energy storage different than any other energy technology. At its core, the battery system is an electrochemical device. Like PV, its materials degrade over time, diminish- ing performance. PV panels lose power output and efficiency. Batteries lose their ability to store energy. While PV systems can be expected to last 20-25 years, energy storage systems typically last only 10-15 years.

Replacement cost should be considered for any project. A risk-based evaluation of replacement should be part of any solar + storage pro-forma. The probability of replacement is dependent on the project throughput and the conditions related to its operation.

The four main factors that contribute to battery degradation are:

There are two tactics to manage battery life in the project. If the project revenue can support it, the battery size can be minimised and a planned future replacement cost can be built into the pro-forma. There are many markets where the revenue of the project can support a future replacement cost. It is usually the case that the estimation of future replacement cost includes a price reduction going into the future consist- ent with what has been witnessed in the last 10 years of the market. The second tactic is to oversize the battery such that its overall current (or C-rate, defined simplistically as charges or discharges per hour) is minimised by paralleling batteries. Lower currents tend to produce lower temperatures due to the exother- mic nature of charging and discharging. Having excess usable energy in the battery system, and using less of this energy overall, reduces the throughput of the battery and makes it live longer.

Throughput is a key term. The legacy of the automotive industry has encour- aged the use of “cycles” as a measure- ment of lifetime. In stationary storage applications, a battery system is more likely to experience partial cycles, or a series of partial charges and discharges, each of which do not fully consume
the available battery energy. The sum of the partial operations may be equal to less than one cycle per day, or they may exceed that metric, depending on the market. This throughput should be assessed to determine how long the battery may live.

Testing the energy storage system requires two elements. First, testing at the cell level is critical to evaluating system lifetime. Testing at the cell level uncovers the strengths and weaknesses of the cell, and helps inform an owner about how the cell should have been integrated into the system, and whether the integration practices were adequate.

It helps to understand the implications of system design by imagining series and parallel battery cell configurations. Battery cells in series are voltage- additive, meaning that a “system” with several batteries in series will have a system voltage equal to the battery voltage multiplied by the number of batteries. Highly serialised architectures have cost advantages; however, they also have some disadvantages. When in series, the cell current is the same as the system current. For example, if a cell has a maximum voltage of 1V and a maximum current of 1A, a string of 10 cells will have a max voltage of 10V but still only a max current of 1A, for a total power of 10V*1A = 10W. When strung together in series, battery systems have voltage monitoring challenges. To reduce cost, the entire string of series cells may be monitored for voltage, but this bulk monitoring will obscure whether a single cell is drifting out of specification.

On the other hand, battery cells in parallel are current-additive, meaning that a system with parallel battery cells will have a system voltage equal to the battery voltage, but a system current equal to the battery current multiplied times the number of batteries in parallel. For example, if the same 1V 1A cell is considered, the same 10W power is required, two cells can be wired in parallel to decrease the current per cell by half for the same total current per cell pair of 1A, and then 10 pairs can be stacked in series to achieve 10V at 1A for for voltage, current and temperature, but this is more common in the parallel configuration.

This series-parallel distinction is important when the battery capacity guarantee or warranty is considered. The following factors flow down through a hierarchy that ultimately influences battery life: market function ➜ charge/ discharge behaviour ➜ system limits ➜ cell series-parallel architecture. There- fore, the nameplate capacity, which is what the system can do after the system architecture and system limit layers, is not indicative of how much overbuild may be in the system. The overbuild is important for warranty considerations, as it determines the current at the battery cell, the battery cell temperatures, which SOC ranges the battery cells dwell in, and therefore, whether they are designed to exist inside or outside abusive conditions.

System testing is complementary for battery cell testing and is often more applicable to project requirements that certify that the system is operational
and meeting its contractual obligations. Manufacturers often have factory or field commissioning test protocols that verify the function of systems and subsystems, but they may not adequately address the risk of system performance over project life. A common area of discussion around field commissioning is the conditions for the capacity test, and whether they are relevant to the actual market in which the system ultimately participates.

The importance of battery testing

This testing compares battery performance against its series-parallel architecture, the system limits, the charge/ discharge behaviour in the market, and the market functions, and determines if the warranty is valid. This unique service independently verifies whether the manufacturer responsibly and correctly estimated their warranty such that the owner can make an educated assessment of its exposure to technical risk.

This validation is one of several required in technical due diligence. The other factors of assuring that the project is built and designed as intended, on schedule, on budget, and with reason- able guarantees and appropriate equipment, are common to technical due diligence processes across the energy sector.

DNV GL’s 2018 Battery Performance Scorecard can be downloaded at www.dnvgl.com/BatteryScorecard. The 2019 report will be published later this year