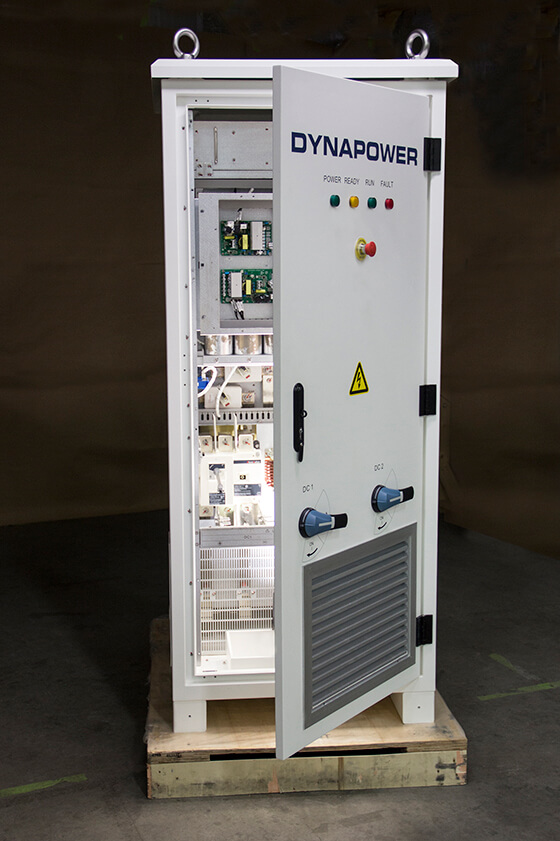 Energy storage inverter and power conversion company DynaPower has delivered its first ever DC-to-DC converters to large-scale solar-plus-storage projects in the US.

DynaPower announced yesterday that it had received the orders for the equipment for use at three unnamed projects. The company was unable to give much detail on customers or their profiles, besides mentioning that they are two of the country’s largest independent power producers (IPP). Major US IPPs include AES Corporation, NRG Energy and Vistra, FirstEnergy and GenOn Energy.

DynaPower has patent-pending for its DPS 250 bi-directional 250kW DC-to-DC converter, which is listed by safety consulting and certification house UL. In late November, the company received a patent for another piece of tech, Dynamic Transfer, which enables DynaPower-equipped systems to quickly switch to backup power in the case of a grid outage.

The company claims the advantages of DC-to-DC conversion include lower installation costs and regulatory costs, easier interconnection to the grid and raised efficiency. DynaPower claims it can increase the uptime of PV-plus-storage plants, reducing the need for curtailment and minimising the energy lost through ‘clipping’.

DynaPower energy storage sales director Chip Palombini said the addition of the converter to solar-plus-storage facilities could increase revenues by boosting energy production and output, arguing that the converter is low-cost and can achieve “higher overall efficiency than AC-coupled solutions”.

The converter can be configured for large plants, with a 375kW model also available. DynaPower president Adam Knudson claimed the company has deployed 400MW of its inverters for energy storage to date.

“Our DPS line of patent-pending DC converters is another example of our passion for innovation, and facilitates a cost-effective solution to reliably integrating a higher percentage of renewable energy within our nation’s power grid to further lessen our dependency on fossil fuels,” Knudson said.

Another maker of power converters to the sector, Ideal Power, recently announced that two of its products had achieved certification through UL.

The inverters had to be proven to stay online and maintain power output in real-time to stabilise the grid in stress events such as brownouts or unusually hot weather. This differs from the “traditional utility interconnection requirements”, Ideal Power said, which call for inverters to disconnect when the grid experiences instability.

“By achieving the UL 1741 SA certification, Ideal Power is meeting a higher standard for advancing grid modernization with a product line that is adaptable for shifting market parameters in California and beyond. We anticipate more states will adopt similar requirements and we believe Ideal Power products will support higher integration rates of distributed energy resources to the grid,” Ideal Power CEO Dan Brdar said.

In July, Ideal Power signed up to partner with NEXTracker, the single-axis PV tracker company which has also started selling integrated solar-plus-storage solutions. Kit including power conversion system and solar PV inverter are supplied to the tracker company. Also that month, Ideal Power supplied 1.6MW of Stabiliti power conversion units to projects in California and Texas.