Coal out for solar-plus-storage at Indiana utility Vectren, 8minute signs PPA with CCAs 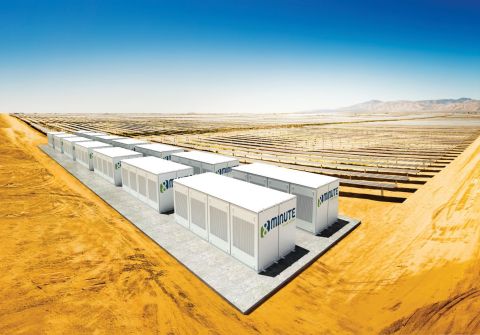 Vectren, owner of utility firms in the US states of Indiana and Ohio, has unveiled plans to ditch more than 700MW of coal generation and partly replace it with up to 1GW of solar PV.

And those plans, detailed within the utility’s Integrated Resource Plan (IRP), could see new solar arrays paired with battery energy storage in a bid to save consumers served by Vectren up to US$320 million over the next 20 years.

Yesterday Vectren presented its preferred portfolio as part of a plan to diversify and decarbonise its fleet of electricity generators over the coming years. Under that plan, nearly two-thirds of power will originate from renewables sources, replacing fossil fuel generators that are either retiring or Vectren will create exit agreements for.

Between 700MW and 1GW of large-scale solar is planned by Vectren to offset retiring coal facilities, some of which will be installed alongside battery energy storage, the company said.

On top of saving consumers some US$320 million over the 20-year planning period, the shift in generation will also reduce carbon emissions from Vectren’s operations by nearly 75%.

Lynnae Wilson, chief business officer at Indiana Electric, said the plan would be finalised over the coming months but noted the need for flexibility given “ever-advancing technology in a rapidly evolving industry.”

“Using what we have learned from this IRP process, we will be pursuing a much larger percentage of renewable energy, as well as continuing to offer energy efficiency programs to ensure customers have options to use energy wisely,” Wilson added.

This story by Liam Stoker.

8minute said it is the developer’s first PPA with community choice groups. CCAs exist in several states of the US and enable communities to choose their own energy providers while sitting within the service areas of utility companies.

Monterey Bay Community Power Authority (MBCP) and Silicon Valley Clean Energy (SVCE), the two CCAs that signed the deal with 8minute, are in the California investor-owned utility PG&E’s service area. The pair have pushed out several requests for proposals (RFPs) for clean energy that have led to agreements with major California solar and solar-plus-storage facilities, resulting in deals with the likes of First Solar this April and with Canadian Solar and then EDF in late 2018, among others. The pair announced in April a 2,000MW procurement drive and RFP.

Located in California’s Kern County – pretty much the state’s 'Solar Farm Valley' in terms of the number of big projects built there – power from Aratina will serve up to 8% of MBCP’s retail load and 6.6% of SVCE’s annual retail load.

“Securing renewable, reliable, affordable energy to power our community and support our clean energy goals is our top priority, and we have been proud to work with the state’s largest solar developer to ensure that we meet that goal. This large-scale, long-term solar project with storage launches us into an even stronger position in doing our part to reduce carbon emissions while meeting our customers’ needs,” MCBP’s CEO Tom Habashi said.

8minute Solar Energy announced it had secured US$225 million in financing from five major banks at the beginning of June for a pipeline of solar projects claimed to be around 18GW. Chief development officer Sean Kiernan told Energy-Storage.news this week that the vast majority of that pipeline is solar with energy storage.

This story by Andy Colthorpe

These stories originally appeared as separate items on PV Tech.