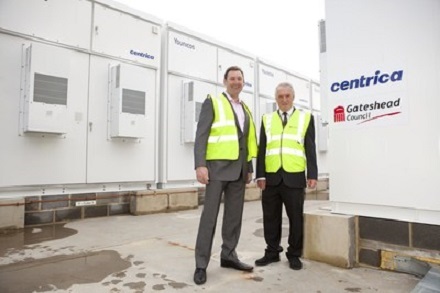 Centrica has completed the installation of a 3MW battery in the North-East of England for local authority Gateshead Council, which the multinational utility’s Distributed Energy and Power business has dubbed one of the country's largest commercial battery storage schemes.

The battery project has been designed to store or release energy generated by a pair of 2MW combined heat and power (CHP) units at the Gateshead District Energy Centre, which opened earlier this year.

Once commissioned, Centrica will manage the project under a 10-year contract, during which time it will aim to secure contracts to provide flexibility services to the grid, offering sub-second response times. The battery will also be used to help meet peaks in local demand, providing electricity through a private wire to council-owned buildings and others in the town.

Alan Barlow, UK & Ireland director for Centrica Distributed Energy and Power said: “The Gateshead Energy Centre is a ground-breaking scheme and an impressive demonstration of how distributed energy solutions can generate cost savings, strengthen resilience, by bringing together battery storage and other energy technologies.”

This latest project, which will be commissioned later this year, represents collaborative efforts between Gateshead Council and Centrica which has also seen the installation of 2MW of solar panels on 34 public buildings in the town.

“It's a bold, imaginative scheme that means we can also store and release power when we choose, as well as supporting the National Grid, which helps raise more income to support council services.”