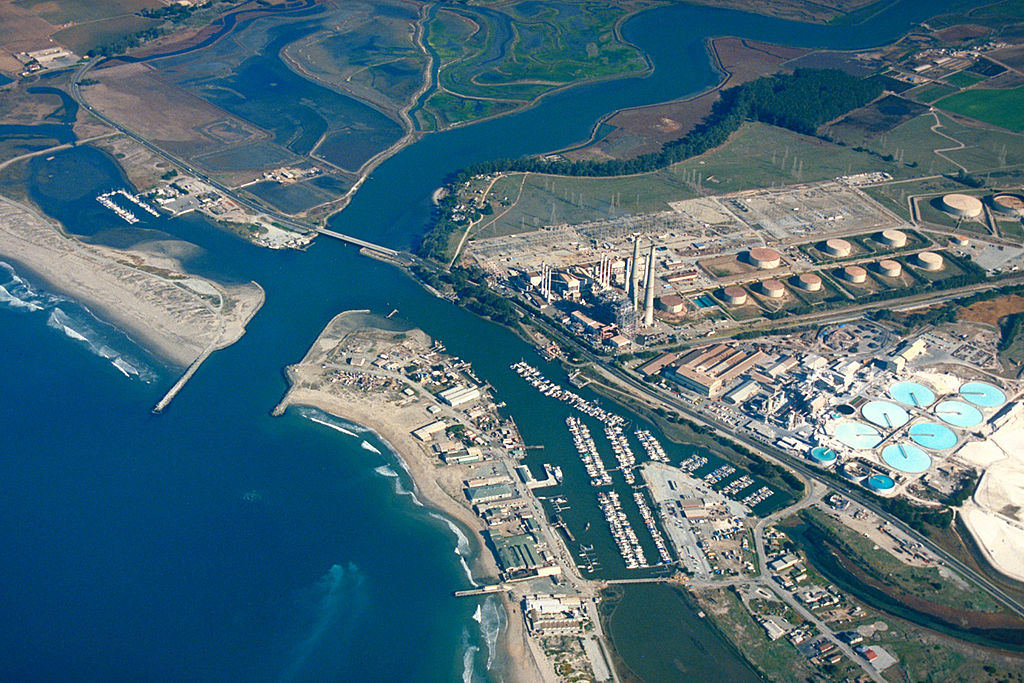 Moss Landing, Monterrey Bay, California, pictured before the gas power plant complex in the centre was redeveloped to house two of the largest battery storage projects in the world, both in PG&E’s service area. Image: US Army Corps of Engineers Digital Visual Library.

Pacific Gas & Electric (PG&E), one of California’s three main investor-owned utilities, has said that 1,400MW of battery storage to be deployed in its service area by the end of 2023 will keep the company on-track to meet statewide renewable energy goals “while ensuring grid reliability”.

The utility said yesterday that according to estimates included in its latest 10k filing to the Securities and Exchange Commission (SEC), it met more than 35% of customer demand for energy from renewable energy resources in 2020. California Renewable Portfolio Standard (RPS) goals required energy providers to deliver 33% renewables by the end of last year.

PG&E said that more than 88% of electricity used by its customers came from emissions-free resources, including nuclear and hydroelectric power as well as solar, wind, bioenergy and geothermal. Under the RPS, the 33% mandated goal rises to 50% by 2030 and to 100% by 2045.

PG&E said that its investments in battery storage will be an important factor in integrating renewable energy onto its grid while enhancing reliability and keeping electricity costs down for customers. The utility is “well-positioned with the battery storage projects under contract to meet the state’s ambitious clean energy and storage goals, while ensuring grid reliability,” in a press release yesterday.

As with the other two California investor-owned utilities, Southern California Edison (SCE) and San Diego Gas & Electric (SDG&E), PG&E’s ongoing wave of energy storage investment was begun with what is thought to have been the world’s first major mandated utility procurements of advanced storage, Assembly Bill 2514 (AB2514).

Through AB2514, the California Public Utilities Commission (CPUC) instructed the trio to contract for 1.35GW of storage across their service areas by the end of 2020. PG&E’s share of that was 580MW including transmission-connected storage and a small portion of distributed and customer-sited energy storage. According to CPUC figures, PG&E finished up with 752.5MW of transmission storage, including two of the largest battery projects in the world, both at the former Moss Landing gas power plant site, as well as 41.5MW of distribution-level storage and 50.1MW of customer-sited, behind-the-meter storage.

The CPUC also instructed the investor-owned utilities to procure more energy storage to meet their reliability requirements in late 2019, including an authorisation for PG&E to procure 716.9MW or more of system reliability resources that should go online between August 2021 and August 2023. PG&E responded by procuring more than 800MW in total, around half of which would come online by the earlier date and another 387MW for which it requested approval from CPUC in December last year.

In addition to 1,400MW of energy storage the utility has now contracted in its service area to commission and connect by the end of 2023, there are also “hundreds to thousands” of new behind-the-meter (BTM) customer-sited systems being connected to PG&E’s grid each month, with 19,000 systems totalling more than 230MW of capacity already connected, mostly residential. PG&E said the California Self-Generation Incentive Programme (SGIP), which supports energy storage deployments as well as solar and other eligible technologies with cash rebates for customers, has helped this along. 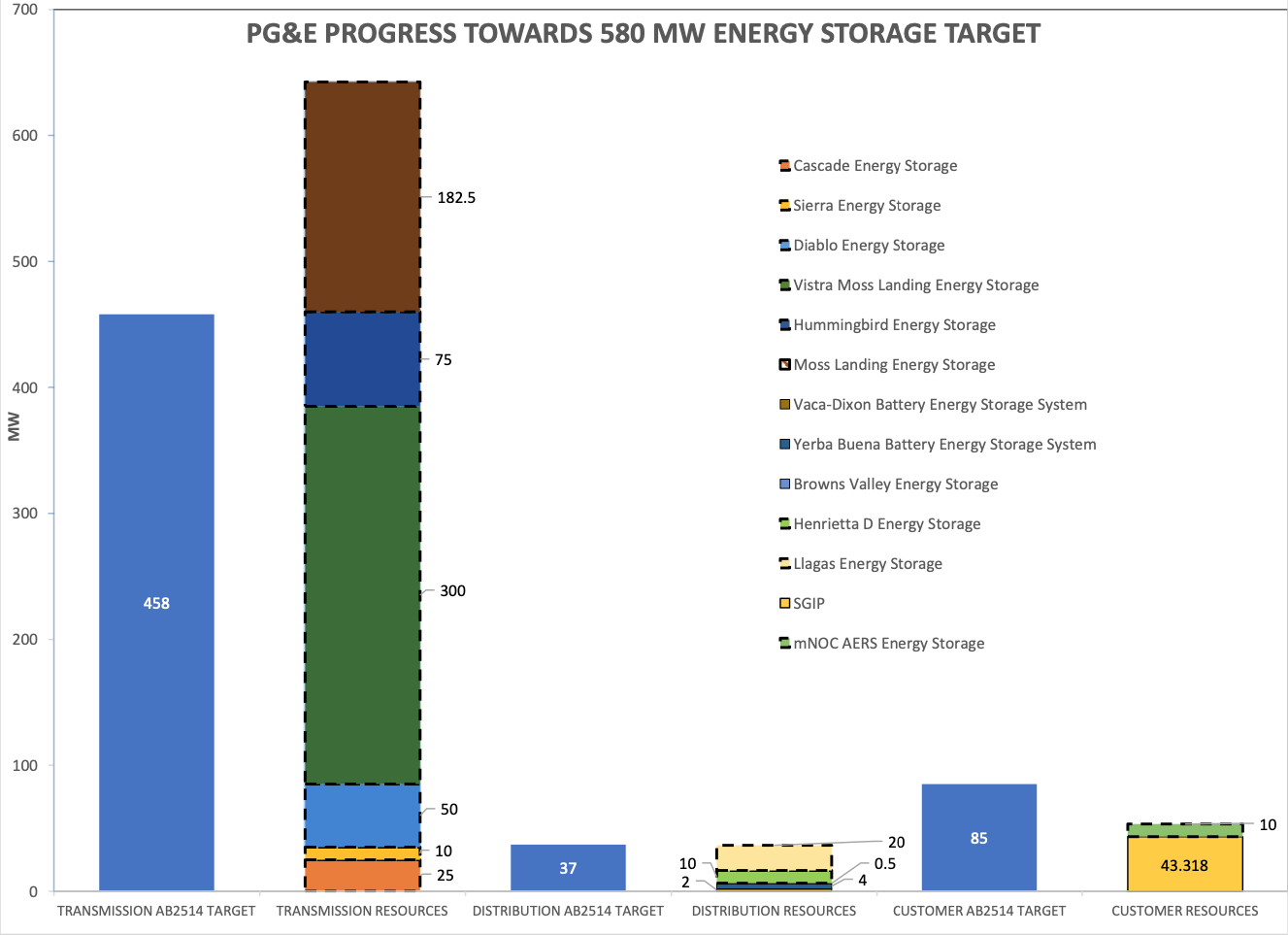 How PG&E surpassed its required contracting of 580MW of energy storage through the AB2514 mandate. Image: California PUC.

SGIP also has a carve-out for customers concerned about the resilience of their power supply from the grid — which is a particularly pertinent concern in PG&E’s service area. Some of California’s wildfires, which devastated the region, were caused by ageing or faulty transmission equipment in at-risk regions of the state, including in PG&E’s service area.

Not only does that mean PG&E’s 10k filing to the SEC contains a lengthy passage of disclaimers due to the ongoing risks of wildfire liability, but the utility has also famously enacted public safety power shutoffs (PSPS), cutting off electricity to many at-risk regions for indeterminate periods of time, affecting many of its customers for days, weeks or even months at a time.

Many industry sources including energy storage vendors have commented to Energy-Storage.news that this has lead to increased customer interest in battery storage paired with solar to gain a degree of independence from the utility in these instances, as well as spurring a general uptick in demand for batteries as a resilience asset.

PG&E is only just leaving behind the shadow of a 2019 Chapter 11 bankruptcy filing largely caused by the wildfires and its liabilities for them, which the utility found financing to emerge in mid-2020. At the grid-scale, PG&E still has ahead of it the challenge to meet reliability and electricity demand when its 2GW Diablo Canyon nuclear power station retires in 2026. However, PG&E said yesterday that it believes it is on course to meet both the 2030 and 2045 renewable energy goals of state legislature.

Meanwhile the state of California itself is wrestling with big-picture questions of maintaining grid reliability in the wake of heatwaves that caused blackouts in August last year and finding resources to mitigate the retirement of Diablo Canyon and the ongoing use of natural gas peaker plants to balance the grid at times of high demand. A number of environmental and climate crisis advocacy groups have told Energy-Storage.news that solutions directly linked to carbon emissions elimination need to be introduced to deal with gas peakers, while energy storage industry groups have suggested that solutions to long-term reliability issues could be found in long-duration energy storage technologies.