California has cleared another obstacle for energy storage installations to be eligible for access to the state’s net metering programme.

The California Public Utilities Commission (CPUC) will continue to break down barriers for energy storage systems. This process ensures on-site renewable energy powers on-site battery systems. Crucially, the CPUC has now said that it is happy with proposals from California Solar and Storage Association (CALSSA).

Solar net metering and storage have not been natural bedfellows thus far with the former nullifying many of the benefits of the battery and contributing to the slow take-up of residential storage systems in the state. The CPUC decision applies to larger systems and is a significant milestone in what has been a lengthy process. 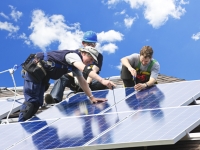 The latest decision is a further endorsement of industry-led plans to maximise net metering with solar-plus-storage systems. Source: DNV GL.

“NEXTracker is overjoyed to see this programme come to fruition and we are so grateful for partners such as the California Solar and Storage Association (CALSSA), the California Public Utilities Commission (CPUC), and SepiSolar for spearheading on the policy front,” said Alex Au, CTO, NEXTracker.

The company has been working with other to demonstrate how solar plus storage systems can use software and firmware to satisfy the conditions set out by the regulator.

“When we set out to enter the PV plus storage marketplace, we envisioned a holistic, fully integrated power plant from the get-go; not a market where individual components roam free, causing delays, sub-optimal performance, and lost opportunities for revenue generation,” explained Au.

“To kick-off this project, NEXTracker worked closely with PG&E, SCE, and SDG&E on the utility side to integrate meter and NEM policy requirements into software functions native to the equipment which would allow for cost reductions in labour and components, maximize NEM credit accruals, and to simplify the approval process. As a unified front, we then took all requirements from key stakeholders and created tests and proposed standards with Nationally Recognized Test Laboratories (NRTLs) such as UL.”

A white paper released by CALSSA on 30 January detailed the barriers facing behind the meter energy storage from maximising the benefits of net metering.

“California policymakers have had great intentions to enable distributed resources to capture the additional value they can bring to the grid, but pushing past some of the technical challenges has been slow going,” said white paper author Scott Murtishaw.

In the CPUC decision posted on 5 February, the regulator indicated that it was satisfied with the result of that process

“We are persuaded by the comments of CALSSA, CESA and EFCA that, in lieu of metering requirements, it is reasonable to approve control-based options that have certified to a national standard or a utility-approved interim testing procedure,” reads the decision.