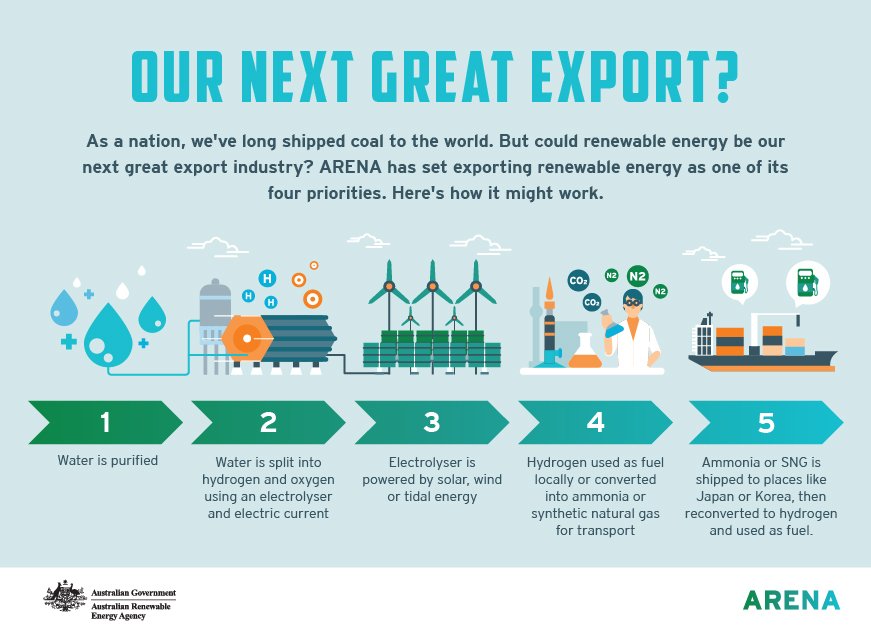 The federal government of Australia has given Major Project Status to the Asian Renewable Energy Hub, which it said will include “the world’s largest wind and solar electricity plant,” producing green hydrogen and ammonia.

Our sister site PV Tech reported earlier this month that environmental approval has been granted for the first 15GW stage of the project in the Pilbara region of Western Australia by the local state government – comprising 5GW of solar generation and 10GW of wind.

The Hub will produce hydrogen and ammonia from renewable sources that can be exported, as well as used by local industries. Western Australia’s state regional development minister Alannah MacTiernan said the facility would “put Western Australia on the map as a major contributor to lowering carbon emissions”.

On Friday (23 October 2020), in a press release that claimed the federal government of Prime Minister Scott Morrison is “helping fast-track” the project by granting it Major Status, the federal Minister for Industry, Science and Technology Karen Andrews said the Hub will transform the region while contributing to a “major new export industry for Australia”.

The 6,500 square kilometre project is expect to support the creation of 20,000 jobs – both direct and indirect – during a 10-year construction period and then 3,000 jobs once operational. Along with energy storage, low carbon materials, carbon capture and storage and soil carbon measurement, hydrogen has been highlighted by the federal government of Australia as a priority technology in its Technology Investment Roadmap, published in September.

While Australia’s Roadmap seeks to lower the cost of energy storage for firming to below AU$100/MWh (US$71.11/MWh), the country is targeting an economic goal for hydrogen production at or under AU$2 per kilogram. A study published in August by the Australian National University, 'Green hydrogen production costs in Australia: implications of renewable energy and electrolyser costs' describes that goal as feasible within the next decade. The government has committed more than AU$570 million towards supporting the development of a domestic hydrogen industry. At present, the government is mostly focused on developing large, multi-megawatt electrolysers, although one recently supported project will use distributed small-scale modular electrolysis units made by Germany-headquartered start-up Enapter.

Federal Minister for Energy and Emissions Reduction Angus Taylor said that “projects like the Asian Renewable Energy Hub” will help the country achieve that goal, with the Technology Investment Roadmap highlighting that at or below that threshold, the cost of green hydrogen becomes competitive in applications including ammonia production for industry, transport fuel and for firming electricity.

“This project has the potential to help lower global emissions while building a new Australian industry that creates jobs and opportunities in regional Australia,” Taylor said.

In an article for the recently-published latest edition of our quarterly journal, PV Tech Power (Vol.24), Janice Lin of the Green Hydrogen Coalition based in the US wrote that “of the commercially available solutions, green hydrogen was the only low-carbon, potentially economically viable option to support seasonal, dispatchable, scalable energy storage for the grid”.

“In my research, I learned that hydrogen was a mature industrial commodity, with approximately 70 million metric tons sold each year around the world – and that virtually all of this hydrogen produced is sourced from fossil fuels. I also learned analysts were predicting that with the increasingly low cost of wind and solar, green hydrogen via electrolysis would become cost competitive with grey hydrogen (hydrogen made from fossil fuels) in coming years,” Lin wrote.

Elsewhere in that feature article, Janice Lin, who is head of consultancy Strategen and is the former head of the California Energy Storage Alliance, noted that green hydrogen holds the promise of making the clean energy transition “affordable, reliable and scalable,” with one of the key factors to that being that green hydrogen “could could serve as a drop-in fuel replacement for natural gas and provide long duration seasonal energy storage using existing infrastructure.”

With the addition of Major Project Status, the Asian Renewable Energy Hub (AREH) is recognised by the Commonwealth Government as a project of strategic significance to Australia, providing companies involved with extra support from its Major Projects Facilitation Agency: which will streamline processes such as gaining approvals from authorities at Commonwealth, state and territory level.

The AREH project’s director, Brendan Hammond said the securing of that status “sends a strong signal “to everyone involved, including potential customers and investors, that our project is at the forefront of an emerging green hydrogen industry for Australia, and the opening of a massive new export market to the fast-growing Asian economies to our north.”