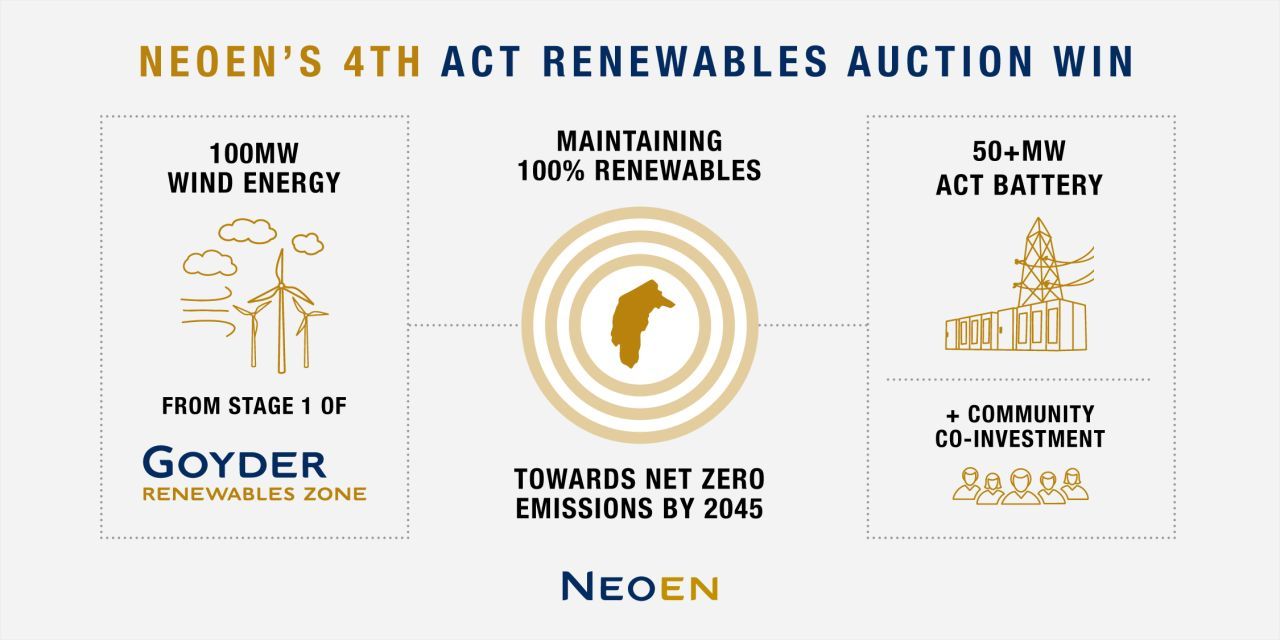 Neoen celebrated its win while spelling out its commitments that won it the ACT Renewables Reverse Auction. Image: Neoen via LinkedIn.

The Australian Capital Territory (ACT) has awarded 200MW of renewable energy capacity in a reverse auction, while the state government has emphasised the significant role large-scale batteries that were also handed contracts will play in the region’s transition to cleaner energy.

The ACT government said in a media release yesterday that its fifth Renewables Reverse Auction delivered “significantly lower prices” than previous auctions, with prices averaging less that AU$50 (US$36.07) per MWh, down by about a third on the cost of contracts in the preceding auction.

Both of the winning developers, which won 100MW wind power contracts each, are building their renewable energy capacity elsewhere in Australia but will build large-scale batteries at sites of exact location to be determined, to help support the ACT grid, in or near the national capital, Canberra. The ACT is targeting becoming a 100% renewable energy jurisdiction with net zero emissions by 2045.

“The ACT Government has today announced the two successful bids under the latest round of the Government’s renewable electricity ‘reverse auction’. This will help Canberra maintain 100% renewable electricity into the next decade, see the construction of two large-scale batteries in Canberra, and deliver the best pricing outcome for residents in the programme’s history,” ACT climate change and sustainability minister Shane Rattenbury said.

“The batteries will help support the Territory’s own grid, particularly providing power to help avoid blackouts during periods of high demand and when large fossil fuel generators fail in heatwave conditions. These big batteries mean that our small jurisdiction is again punching above our weight when it comes to real climate action.”

Long-term contracts at around AU$50 per MWh

France-headquartered renewable energy project developer Neoen has continued its run of success in Australia, which so far has included developing the famous Hornsdale Power Reserve project in South Australia with technology provider Tesla. Neoen was handed a 10-year contract to deliver 100MW of wind energy, from Stage 1 of its Goyder South Wind Farm across the country in South Australia.

The wind farm is part of the ambitious Goyder Renewables Zone project, which is planned to include 400MW of wind generation, 200MW of solar PV and 300MW of battery storage over five separate stages. It is planned to begin construction in 2022. Neoen said that its battery in Canberra meanwhile will be at least 50MW capacity.

Meanwhile, the other winner, Global Power Generation (GPG), won a contract for 14 years for 100MW of wind from Stage 2 of its Berrybank Wind Farm, Victoria. GPG fitted out the first turbine at for the first 80MW stage of the Berrybank project in March this year with the project set to reach 180MW of capacity.

Neoen’s 10-year feed-in tariff (FiT) contract was awarded at AU$44.97 per MWh, while GPG’s 14-year FiT was awarded at AU$54.48 per MWh. The ACT government said that it expects the total cost of the FiTs from all auctions to cost each household in the state less than AU$4.90 per week.

Neoen said that residents of the ACT and the Capital Region will have the opportunity to invest in its large-scale Canberra battery, which the developer will build and retain ownership of. Neoen said in its own press release that in putting the building of the battery into its bid to win the auction, the company “committed to go beyond the base requirements on the tender process”. Neoen said the win is its fourth in ACT tenders, including winning the state’s first wind auction, held in 2015.

Reports published recently into two of Australia's first major battery storage projects appear to have shown them to have been an economic and technological success over 12 months of operation, echoing positive reports received about the Hornsdale battery project a while back.