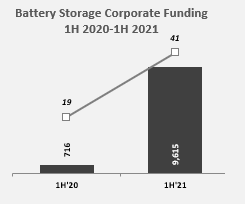 Companies in the battery storage industry raised US$9.6 billion in corporate funding during H1 2021, with European manufacturing startup Northvolt once again the biggest single recipient of venture capital (VC) investment.

This total was a huge leap on the pandemic-depressed first half of 2020, when the figure stood at just US$716 million. Research firm Mercom Capital Group has released its latest report into funding and merger and acquisition (M&A) activity in battery storage, smart grid and energy efficiency.

Mercom publishes the reports on a quarterly basis and it found that battery storage was by far the biggest sector among the three for corporate funding; smart grid companies raised US$471 million in 18 deals, energy efficiency US$348 million from three deals.

The US$9.6 billion of corporate funding into battery storage came from 41 deals. Mercom also noted that nine M&A transactions took place in the sector in the first half of this year, one more deal than in the equivalent period of 2020. About US$5 billion of that total was raised in the first quarter.

In both 2019 and 2020, funding raised by Sweden-headquartered Northvolt stood out as a major contributor to the totals. After the first half of 2020, Mercom noted something of a rebound in funding in the latter part of the year, including a Northvolt equity raise of US$600 million and debt financing of US$1.6 billion, and about US$6.5 billion was raised by battery storage companies for the year. Similarly in the first half of 2019, Northvolt’s US$1 billion raised was the biggest deal of the period by far. 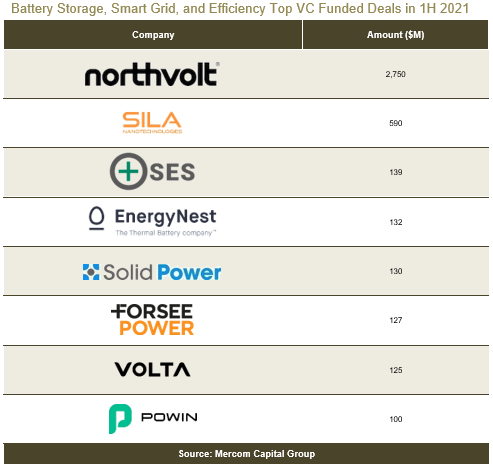 In the first half of this year, Northvolt raised US$2.75 billion of corporate funding from parties that included Goldman Sachs Asset Management, Volkswagen, Scania, EIT InnoEnergy and Daniel Ek, the entrepreneur who is CEO of music streaming service Spotify.

Northvolt is aiming to build 150GWh of annual lithium-ion battery cell production capacity by 2030. The company is designing the cells itself and powering their production from as much renewable energy as possible. The majority of its products will go to automotive manufacturers such as Volkswagen.

However, Northvolt spokesperson Jesper Wigardt told this site earlier this year that roughly 20% of cell volumes are likely to be committed to Northvolt Systems, its subsidiary which will work on stationary energy storage products, including grid-scale systems. In addition to its first battery gigafactory being under construction in Sweden, the company is also building a stationary energy storage system assembly facility in Poland.

Second in the top five list of recipients of VC funding was Sila Nanotechnologies, which raised US$590 million through a Series F funding round. SIla Nanotechnologies has developed a silicon-based anode which could replace graphite in lithium-ion batteries, increasing energy density. While currently targeting small applications like consumer electronics, there is an expectation that the company wants to scale up to bigger batteries in the coming years. Like Northvolt, Sila was founded by a CEO who served as a senior team member at Tesla.

In third place was SES, a company developing batteries for electric vehicles that use ultra-thin lithium-metal anodes, which it is hoped will reduce battery weight and production costs. Its Series D funding round this year raised US$139 million and was participated in by big names like General Motors, SK Inc and Shanghai Auto.

The only non-electrochemical battery storage company in the top five was Energy Nest, which has developed a novel thermal energy storage technology based around storing heat in a specially-formulated type of concrete. The company netted US$132 million of investment from Infracapital, the infrastructure equity arm of global investment management firm M&G Plc in a deal which was announced in April.

Rounding out the top five was all-solid-state battery maker Solid Power, which raised US$130 million in a Series B round from BMW Group, Ford Motor Company and Volta Energy Technologies. Solid Power is currently aiming to go publicly listed through a merger with special purpose acquisition company (SPAC) Decarbonization Plus Acquisition Corporation III.

September 23, 2021
Ahead of an expected uptick in demand for vanadium redox flow batteries (VRFB) for stationary energy storage applications, two companies on opposite sides of Australia have claimed milestones in their go-to-market strategies.

September 21, 2021
A battery energy storage system (BESS) pilot project has been commissioned in Lithuania, paving the way for a much bigger rollout of the technology scheduled to begin soon.