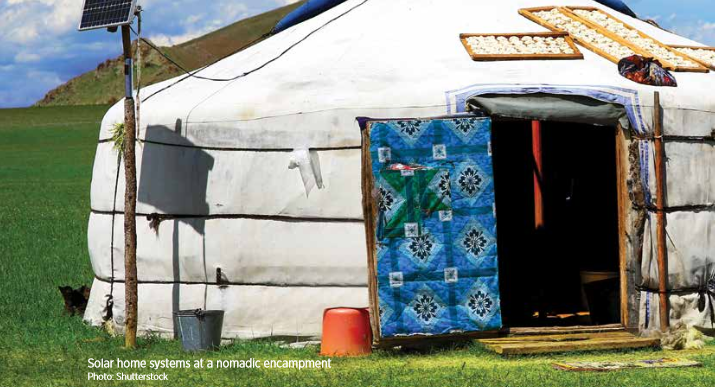 The total cost of the project is US$66.22 million. Credit: Nomad Solar Shutterstock

The system will supply power and heating to more than a quarter of a million people across scattered local towns in the remote and less-developed western region of Mongolia, where locals rely on high-cost and fossil fuel-based electricity imports from neighbouring countries. The wind-solar-storage system accounts for 40.5MW of capacity combined with a 500kW thermal shallow-ground heat pump system, which will supply pollutant-free space heating in public buildings. This system could be scaled up in the future.

No further details were supplied about the battery technology intended to be used on the plant.

The project will also help enhance the ability of local utilities and related agencies to manage a stable electricity supply. The total cost of the project is US$66.22 million, with the Government of Mongolia contributing US$5.62 million.

The power system, expected to be completed by 2023, will also be co-financed by a US$14.6 million grant from the Strategic Climate Fund (SCF) under the Scaling Up Renewable Energy Program in Low-Income Countries, and a US$6 million grant from the Japan Fund for the Joint Crediting Mechanism (JFJCM), which supports the adaptation of advanced low-carbon technologies in ADB-supported projects.

“A clean, reliable, and sustainable energy sector is needed to boost economic growth in western Mongolia while addressing the need to reduce carbon and air pollutant emissions,” said ADB principal energy specialist for East Asia Shigeru Yamamura. “The 41MW renewable energy system that the project will finance will not only make the energy sector less carbon intensive, but also help the country’s efforts in meeting its commitment under the Paris climate agreement to reduce carbon emissions by 14% by 2030.”