3,000MW of California energy storage will ramp to deal with solar eclipse 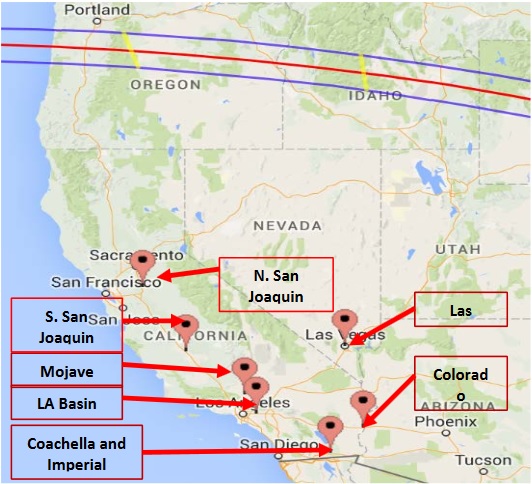 Expected path of eclipse. Northern and southern path limits in blue. Within the central path, obscurity of the sun will be total but California will also experience obscuration of up to 76% at times. Image: http://eclipse.gsfc.nasa.gov/SEgoogle/SEgoogle2001/SE2017Aug21Tgoogle.html

California’s grid operations will be supported by the ramping of an estimated 3,000MW of energy storage, when a solar eclipse expected across the Pacific North-West of the US will cause PV generation to dip.

The California Energy Storage Alliance (CESA) trade group issued a statement on Tuesday, asserting that the near-three hour period when the California sun is obscured by the passing moon, between 9:02am and 11:54am local time, will see energy storage ramping to support the grid and providing energy and other support services.

“The eclipse is an important example of how energy storage can help the grid,” Alex Morris, policy director at CESA, said.

“Whether 'front of meter' or aggregated customer-sited (behind the meter) storage, energy storage solutions – as part of the electric grid 'tool-kit' – not only provide benefits to the environment and the grid, but can also help customers manage electricity costs.”

Morris also said energy storage is “an innovative part of the California grid that provides key capabilities for operating a cleaner and more affordable grid, while also ramping up extremely quickly to meet electricity needs when solar power wanes, as we expect during the August 21st eclipse.”

According to the US government’s Energy Information Administration (EIA), 1,900 utility-scale PV plants across the US lie in the eclipse’s path but said that “relatively little solar PV capacity” will actually be in locations where they will be significantly affected. EIA said at the beginning of August that the North American Electric Reliability Corporation (NERC) did not expect the eclipse to create reliability issues on the bulk electric system.

Nonetheless, solar irradiance at large-scale PV plants in North Carolina and Georgia, constituting about 4GW of capacity, will be 90% obscured during the event and about 17 solar farms in Oregon will be completely unable to generate at times during the eclipse.

As one of the US’ most solar-rich states, California has over 10,000MW installed in the service area of its largest grid operator CAISO (California Independent System Operator), serving between 30% and 40% of CAISO’s total load. During the eclipse, CAISO has estimated that the production capacity of 4,194MW of large-scale solar and 1,365MW of rooftop solar capacity – around 5,559MW in total – will go offline, with the effects most keenly felt at around 10:22am when the sun is at its most obscured.

Obviously once the event is over, production will return to normal, reaching about 9,046MW after noon. CAISO said it has prepared for the solar eclipse’s effects for more than a year, including studying a 2015 eclipse in Germany, when fears over reliable ramping up and down again of solar and its impact on the electricity network proved mostly unfounded. In addition to energy storage, CAISO will be procuring additional regulation and reserve capacity from other assets including natural gas plants and a potential 6,000MW of hydropower.

John Carrington, CEO of commercial energy storage provider Stem, said his customers wanted to be “part of an aggregated storage network response and to be part of the solution”. 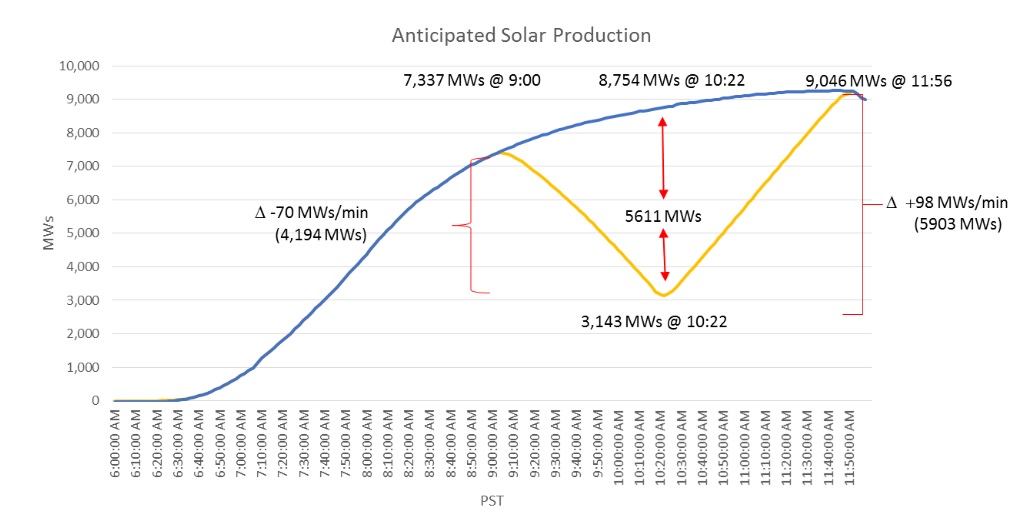