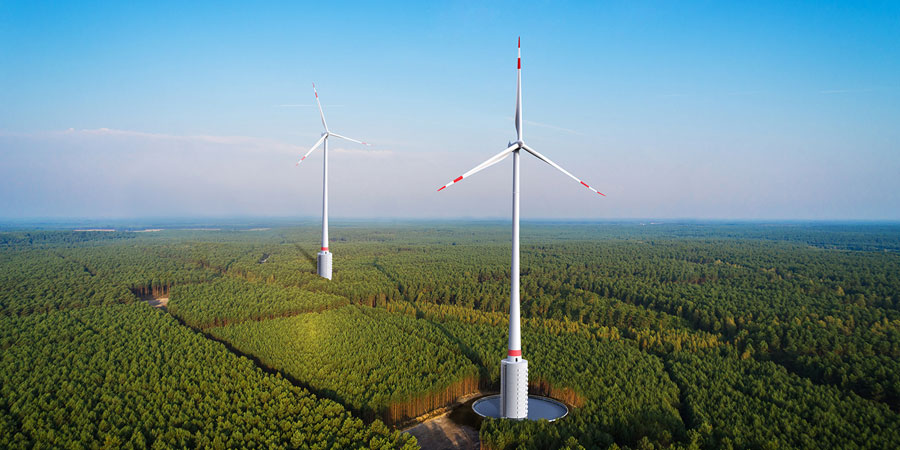 The world’s tallest wind turbine to date, under construction at a German wind farm, will be paired with 70MWh of pumped hydro energy storage onsite.

Four wind turbines of 3.4MW rated capacity each are being installed in Gaildorf, near Stuttgart in southern Germany, by Max Bögl Wind, a subsidiary of Max Bögl, a group active in areas from infrastructure delivery to raw materials supply.

The wind farm, in the Limpurg Hills, includes one turbine with a height of 246.5 metres, making it to date the world’s largest on-shore wind turbine. This impressive height was only achievable due to the incorporation of a pumped hydro storage into the wind farm, because its foundations stand inside a natural reservoir used to store water before it is dropped down a hill through more turbines into another pool, generating electricity in the process.

The depth of this reservoir adds another 40 metres to the height of the turbine, Max Bögl Wind said. Each added metre of height can add between 0.5% and 1% to the expected annual energy yield of wind farms while higher hubs mean less wind turbulence. The wind turbines utilise generators from US provider GE (General Electric) and according to some estimates given by GE and Max Bögl Wind, the wind power plant could generate 10GWh of energy annually.

The innovative plant has been in conception since March 2016, when Max Bögl Wind approached GE Renewable Energy with the idea, although original designs called for just 16MW of hydropower. A supply agreement between the two parties was then signed in September that year.

“With the ‘water battery’ and hybrid towers, we are making wind energy a more attractive and efficient source of clean energy while also setting new records.”

From the 70MWh of reservoirs, water flows into a hydroelectric plant some 200 metres further down the hill. It stores surplus power from the wind turbines and can dispatch the energy in times of low wind generation, helping maintain grid stability and guaranteeing continuous power supply. Although slower than advanced batteries – which can respond in microseconds to grid signals – the pumped hydro plant will be capable of switching from storage to production within 30 seconds.

“In our town and throughout the region, we are investing in our common future in a very ambitious yet sensible way,” Gaildorf mayor Frank Zimmerman said.

“Thanks to the innovative power plant concept, we are proud to be at the forefront of the energy transition – one of the most important transitions of our age.”

While over the past couple of years more attention appears to have been focused on the possibilities for combining or co-locating energy storage systems with solar PV, the wind energy sector has also been deploying systems that combine renewable generation with energy storage technology.

GE recently announced its involvement in a project with software company Microsoft to deploy advanced batteries at a wind farm in Ireland and in Spain, Acciona paired two Samsung SDI battery-based energy storage systems to a 3MW wind turbine at an ‘experimental wind park’ in September. Meanwhile India’s Central Electricity Authority (CEA) is currently deciding whether or not to mandate that large-scale solar and wind power plants should have some energy storage installed onsite as standard.