What the fire service wants you to know about your battery

While fire incidents involving lithium-ion batteries in energy storage systems are rare, they can have devastating consequences for the industry and pose a threat to safety. Tom Bensen, Nick Warner, Ryan Franks and Michael Bowes from energy storage and fire safety expert group Energy Safety Response Group (formerly Energy Storage Response Group) discuss some of the most important aspects of creating a safe battery storage industry.

Energy storage projects can range from a few hundred kilowatt-hours to multiple megawatt-hours in capacity. They can be located in arctic, desert, or tropical environments, in urban or rural settings and in a variety of property owner- ship situations from a solar development, to a utility substation, to a commercial or industrial facility. Each project has a variety of stakeholders present including potentially:

As a project is proposed, conceptualised and built, one entity is often overlooked – fire departments. While the circumstances and details surrounding an energy storage project can vary greatly, each one needs buy-in from first responders and public safety agencies. Energy storage projects have experienced opposition at public hearings, missed timelines, cost overruns and unrealised revenue from delayed operations in recent years. One remedy to these issues is engaging with the fire department from the outset.

It is Energy Safety Response Group’s experience that forthright engagement with the fire department providing response for any planned energy storage system (ESS) instills a high level of goodwill between the fire professionals and the project team, eases friction at public hearings, and speeds up project deployment.

Each of the stakeholders named above has a role and responsibility in the development of an energy storage system. The fire department does as well – it should be an integral member of the project team. Engagement with a fire department starts by understanding their concerns and addressing them and culminates in development of an emergency response plan and training. None of the stakehold- ers wishes an incident to occur in an ESS, but should one occur, the fire department wants you to know and explain certain pieces of information about the site, your system, and its operation.

Concerns of the fire department and how to address them

Energy storage is a relatively new technology to fire departments across the US. While different fire departments have differing levels of exposure to battery energy storage systems (or BESS for short), the primary concern of each is the same: the safety and well-being of their first responders.

Departments and local officials are, however, becoming increasingly aware of the hazards associated with battery storage and it is important that their concerns be properly addressed. Addressing these concerns in a complete and transparent manner has been seen not only to promote overall first responder safety but also to ensure project success. Perhaps the most defining characteristic of lithium-ion battery failures is a state known as “thermal runaway,” in which a battery cell experiences uncontrollable overheating, often accompanied by the release of large quantities of flammable off-gases.

Thermal propagation from the failing cell may lead to incipient thermal runaway of adjacent cells, thus creating a cascading failure across the system, resulting in tremendous amounts of heat and gas. When these gases are allowed to accumulate in an enclosed space (such as a BESS container), an explosive atmosphere may develop, which, given an ignition source, may lead to a devastating deflagration (explosion) event. This blast wave can cause damage to nearby buildings and structures, as well as first responders who may be arriving on the scene, as was seen in the incident that unfolded in Arizona in 2019.

Deep-seated fires are also common in lithium-ion failure events. These fires are not easily extinguished and may continue for hours, fuelled by heat and gas from cascading cell failures. Even if suppressed by water, stranded energy within the cells often causes reignitions, thus perpetuating the event.

Concerns based on environmental risks are also often cited by fire departments across the country. Large quantities of smoke and gas are often released during battery fires, with high levels of carbon monoxide and hydrogen cyanide measured on-site in Arizona at the time of the incident. Contaminated runoff water may also affect the surrounding area. Electrical hazards also exist during and after battery failure events and should not be overlooked.

Industry is introducing measures to mitigate effects of battery failures

As the hazards associated with battery failures, such as those mentioned above, continue to be researched and more well understood, more effective protective measures are being utilised by industry to mitigate their effects. For instance, battery management systems (BMS), which can be thought of as the “brain” of the energy storage system, are becoming increasingly robust, providing granular thermal and electrical measurements at the cell level, as well as providing more effective system responses to abnormal battery conditions.

Deflagration vent panels are also emerging as a common solution for mitigating the effects of blast waves emanating from battery enclosures. These vent panels, which act as pressure relief points in the container, are used to direct the blast away from first responders and are thus often found on the roofs of the battery enclosures. Ideally, however, explosive atmospheres are never allowed to develop within an enclosure.

Exhaust systems, while less commonly utilised, are also finding use by battery system integrators to release flammable gases from the container before explosive limits are reached.

Gas-phase suppression systems such as Novec 1230, FM-200, inert gas or aerosolised gas-based agent have often been included in battery system enclosures to suppress electrical fires which may spread to nearby battery modules. It is important to note, however, that these types of systems are not effective for the extinguishment of battery-related fires, nor will they directly prevent thermal runaway from occurring. To date, water-based extinguishing methods remain the most effective means of providing thermal cooling to battery fires and preventing thermal propagation to adjacent units.

Smoke and gas detectors are widely employed by battery systems and depending on various factors may be effective in identifying an incipient failure event, though they have not proven to be reliable for extracting critical real-time data after an event has occurred. New detection technologies designed specifically for lithium-ion off-gases, however, are beginning to emerge, though are still in relatively adolescent stages of production and have not yet seen widespread adoption within the industry. 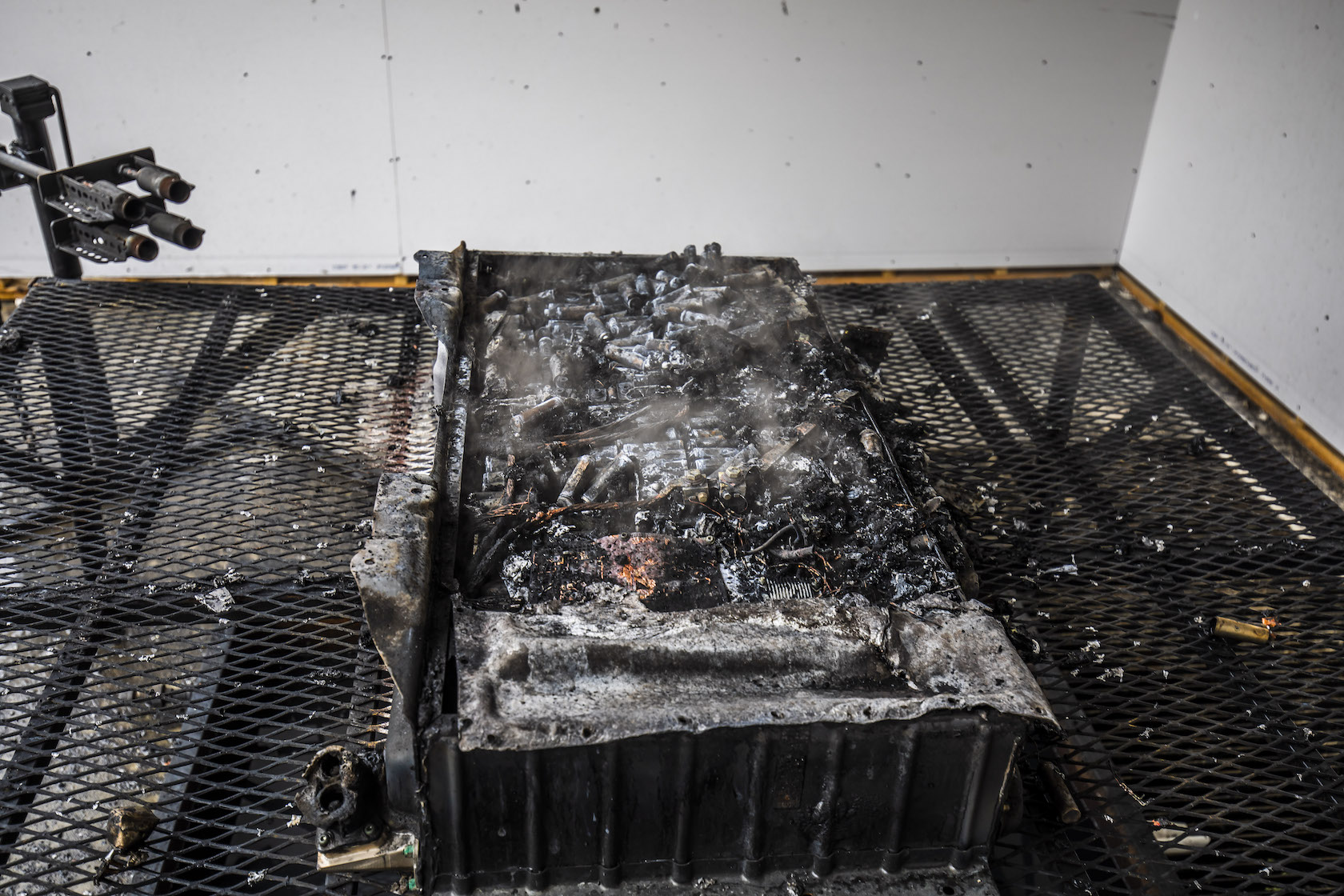 UL 9540 A test data can be used to substantiate safety claims by battery manufacturers and integrators. Image: ESRG.

The shift towards safety

Recent incidents involving lithium-ion battery storage, such as those in Arizona, South Korea and the UK, have gained the attention of industry, fire departments and code officials worldwide and have led to a noticeable shift towards safety within the industry. Fire departments across the US are beginning to look to recently developed codes and standards for the safe installation of energy storage systems.

For example, a chapter solely dedicated to energy storage was added in the 2018 edition of the International Fire Code (IFC), which is adopted by many states. The upcoming 2021 edition of the IFC contains the most robust ESS requirements. Additionally, the National Fire Protection Association (NFPA) has recently developed its own Standard for the Installation of Stationary Energy Storage Systems – NFPA 855 – which local jurisdictions across the country have begun pointing to for BESS deployment.

Updated requirements around energy storage have recently been adopted by California Fire Code (CFC) and New York State – both based on updated Sections 1206 of the International Fire Code. New York City, known for its historically conservative stance with regards to the permitting of battery storage, has played a particularly substantial role in the development of BESS requirements, having led many of the early conversations around safety.

To account for the densely-populated urban landscape unique to New York City, and to ensure the safety of its firefighters, the NYC Fire Department (FDNY) created its own set of requirements – 3RCNY 608-081: Outdoor Stationary Storage Battery Systems – published in October 2019.

In the US, UL 9540 battery safety certification is also becoming widely adopted by code officials, as is large-scale fire testing per UL 9540A. Test data from UL 9540A – a destructive battery test method conducted to determine properties of batteries undergoing thermal runaway – can be used to substantiate safety claims by battery manufacturers and integrators and is required by IFC and NFPA 855 when increasing maximum allowable quantities of storage or decreasing separation distances between units. UL 9540A has also found adoption by the NYC FDNY and Department of Buildings (DOB), who require testing be conducted for all lithium-ion battery systems looking to be installed in New York City.

Energy-Storage.news' publisher Solar Media is hosting the 2021 edition of the annual Energy Storage Summit in a new, exciting format from 23-24 February and 2-3 March, 2021. See the website for more details.

This is the opening extract of an article which appears in full in the latest edition of our quarterly technical journal, PV Tech Power (Vol.25), in 'Storage & Smart Power', the dedicated section contributed by the team at Energy-Storage.news.The full article discusses how to formulate an appropriate plan for emergency response, the full extent of knowledge about each system that stakeholders should have and how best to keep information relayed and available. To download the entire article as an individual paper, or to subscribe to or download the entire 89-page book, visit the PV Tech Store.