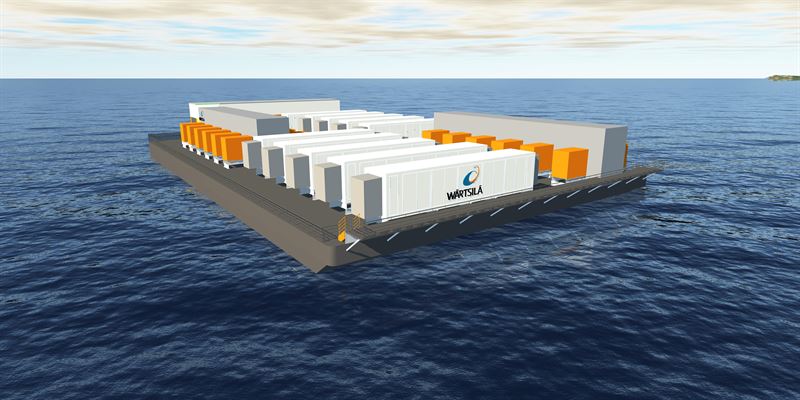 How the Wärtsilä floating barge solution will look. The project will use 54MW / 32MWh of battery storage to help a diesel power platform to provide ancillary services. Image: Wärtsilä Corporation.

The “floating power barge” project is claimed as a first-of-its-kind for the Southeast Asia region and the 54MW / 32MWh of battery storage will be integrated with customer Therma Marine Inc’s (TMI’s) 100MW thermal power barge in the Maco municipality of the Philippines province Davao de Oro.

Wärtsilä said that the existing power barge runs on diesel engines and the energy storage system would help it provide fast response ancillary services to the grid, for which TMI has a contract with the transmission operator, National Grid Philippines. The addition of the short-duration battery system will reduce the power barge’s ramping time from 15 minutes to just 3 minutes.

The project has been fast-tracked, and Wärtsilä, handed a combined system delivery and engineering procurement and construction (EPC) contract by TMI in September last year, anticipates completion in the fourth quarter of this year. Wärtsilä said that 10 units of its recently-launched Gridsolv Max storage solution will be used, and will run on the company’s proprietary GEMS energy management and controls software platform.

“Wärtsilä will meet our urgent needs with this innovative and unique floating energy storage barge. Their ability to deliver this first-of-a-kind solution in less than 12 months is, to say the least, impressive,” Aboitiz Power CEO and president Emmanuel V. Rubio said.

Meanwhile, a Wärtsilä representative told Energy-Storage.news that the first use of a floating energy storage solution in the country signals “the importance of flexible assets for meeting renewable energy targets, especially in the region”. While it’s the company’s first floating energy storage system at that scale in Southeast Asia, Wärtsilä has already installed 1,500MW of capacity through 26 internal combustion engine power barges around the world. The company said its experience in the marine technologies sector, as well as in energy storage system integration and EPC work makes it uniquely suited for this type of project.

“In addition to meeting TMI’s needs, it is important to note that Wärtsilä is the sole EPC provider for this kind of a project. The alternative would be to have one supplier for the barge and another for the energy storage system, which would require a lot of coordination and would undoubtedly slow the final delivery considerably,” Wärtsilä's energy business director for the Australasia region, Kari Punnonen, said.

TMI is a subsidiary of Philippines power company Aboitiz Power, which has a portfolio of generation assets including thermal and renewables, as well as an energy retail business. The new project will be sited in combination with one of two floating barge power plants TMI has in operation, which the company said give an “additional boost of power whenever needed,” to the country’s southern Mindanao island region.

In the Philippines, made up of many islands with limited available land, power plants on floating barges have been seen as an answer to meeting energy demand and helping to integrate the scale-up of renewable energy. According to government statistics, the country’s power generation mix includes about 10.5% hydroelectric power, 13.4% geothermal and about 1% wind and solar combined with about 0.4% biomass and the rest from coal, oil and natural gas.

The Philippines Department of Energy’s National Renewable Energy Programme (NREP) aims to raise renewable energy capacity to more than 15GW by 2030, including a 75% increase in geothermal, 160% increase in hydropower and commissioning more than 2GW of new wind and between 284MW to 1,528MW of solar. Meeting these targets would put the country to between 50% and 60% renewable energy.

Wärtsilä meanwhile appears to be ramping up its energy storage business in the Southeast Asia region, where its legacy business divisions have already delivered more than 9,000MW of mostly engine-based power solutions, including around 300MW of energy storage. Last October, the company announced the completion of Singapore’s first-ever grid-scale energy storage project and said that it had received a further 90MW / 90MWh order for battery storage in Southeast Asia, following on from another 100MW Southeast Asia combined EPC and system deal announced at the beginning of 2020.