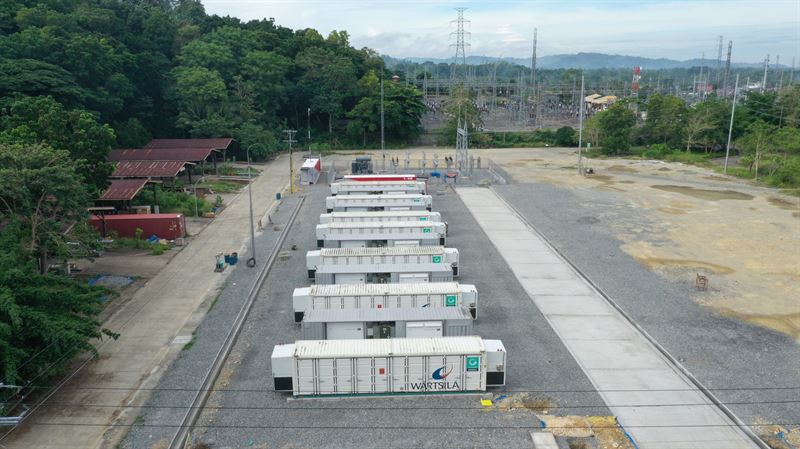 One of the two grid-scale projects commissioned in May. Image: Wärtsilä.

Comprising a 20MW / 20MWh system at a renewable power hub in Toledo and a 40MW / 40MWh at what is thought to be a combined cycle gas turbine power plant in Bataan, commissioning on each was achieved during May, Wärtsilä said in a press release sent to Energy-Storage.news today.

Its customer is Universal Power Solutions, a subsidiary of vertically-integrated Filippino power company SMC Global Power. Wärtsilä had revealed last year that it received a 100MW / 100MWh order from a customer in Southeast Asia, but at that time did not disclose the customer’s name or the country where it is located, but said today that this referred to Universal Power Solutions and further projects are expected to be commissioned through that deal soon.

The company delivers and integrates turnkey battery storage systems through its Wärtsilä Energy business division and is considered one of the leading systems integrators in maturing energy storage markets such as the US. Including its legacy thermal power plant business, Wärtsilä has also delivered 9,000MW of projects into the Southeast Asia region, with around 300MW of that portfolio being energy storage systems.

The Toledo and Bataan projects are Wärtsilä’s first ESS systems supplied to the Philippines, although in addition to the remaining 40MW / 40MWh of projects for Universal Power Solutions, the company is also known to have received an order for a 54MW / 32MWh “floating power barge” ESS project in the Philippines’ Davao de Oro region which it announced in March.

The two commissioned projects have been built using GridSolv Max, Wärtsilä’s standardised modular and flexible energy storage solution that it launched last year and the battery system is driven by the company’s GEMS Digital Energy Platform software and controls.

The Philippines remains largely dependent on coal and other fossil fuels, although it does have a good percentage of hydroelectric capacity (10.5%) as well as geothermal (13.4%) but the government is targeting a rapid rise in renewable energy capacity to >15GW by 2030.

The Association of Southeast Asian Nations (ASEAN) also committed in 2018 to meeting 23% of primary energy needs from renewables by 2025, while the Philippines government has also begun a process of integrating energy storage into its electric power industry, issuing draft guidelines on the topic in April 2019. While there are known to be a few mini-grid projects built using lithium-ion batteries in the country, grid-connected energy storage has been rarer, although a pair of grid-scale projects including a 10MW system which got a frequency control ancillary services contract was built by Wärtsilä rival Fluence – then known under the brand of its parent company AES – in 2015-2016 Zambales province. Additionally, Philippines power utility Meralco and Japanese tech company Hitachi did inagurate a 2MW / 2MWh BESS through a pilot project on the island of Luzon, 50km north of the national capital Manila in late 2019, which was described as the country's first grid-scale, distribution grid-connected BESS.

“Our partnership with SMC Global Power, a company with technical experience in battery energy storage systems, has enabled us to reach this stage and be ready for operation in record time. This also further demonstrates Wärtsilä’s EPC capabilities in the region, as well as our ability to operate under the challenging restrictions set by the pandemic,” Wärtsilä Energy director for the Australasian region Kari Punnonen said.

“These projects showcase our long-term commitment to be present in the Philippines and to continue delivering optimised solutions that support the energy transition in Southeast Asia.”