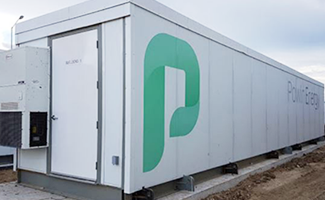 Powin Energy is delivering equipment and integration services to Rappahannock Electric Cooperative for what is thought to be the first grid-scale battery storage system to be installed by an electric cooperative group in Virginia, US.

Electric cooperatives and municipal utilities have been keen to procure renewable energy for their members in the US in latter years and groups elsewhere have deployed energy storage. Virginia only recently implemented a state-level policy, that will see the Commonwealth States go 100% renewable and clean by 2050 and as part of that policy, the Virginia Clean Economy Act (VCEA), also put in place a 3.1GW energy storage deployment target.

Rappahanock Electric Cooperative (REC) and its project partner, developer East Point Energy, said last week that work has begun on the battery project, which has 2MW peak output and 8MWh storage capacity. Construction will start this autumn and the project is expected to be finished early next year.

The system will be located in Virginia’s Spotsylvania County. The cooperative said it will provide “multiple values to the grid,” which will include providing resiliency to the coop's members (who also share ownership of their energy supply group) in case of failures at transmission network level, managing wholesale power costs through the dispatch of stored energy to the grid during peak times and deferring the need to make costly upgrades to local substation infrastructure.

As with initial energy storage system projects announced in Virginia by Rappahannock Electric Cooperative’s much bigger utility counterpart, Dominion Energy, the 2MW / 8MWh system will be used to help the energy supplier figure out its next steps in the energy transition and the role battery storage can play.

“In addition to wholesale power costs reductions and increased reliability, this project will give REC real data on how battery storage can best be deployed in the future,” the cooperative’s engineering and power supply manager Lee Brock said.