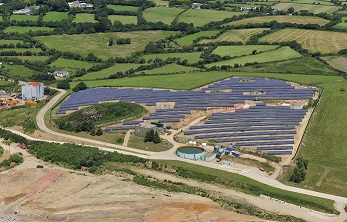 A Solarcentury utility-scale solar farm in southwest England. The two companies have signed a deal to develop PV and are now expected to take energy storage discussions furtther. Image: Solarcentury.

German renewables funder Capital Stage is lining up its first battery storage move, but stressed it could be some time before business models are mature enough.

Earlier today the firm revealed that it had entered into a major strategic partnership with UK solar developer Solarcentury. That partnership will see the duo collaborate on the financing, development and operation of solar parks across Europe and Mexico.

However the two firms also hinted at possible movements in energy storage and addressing a conference call today, Capital Stage chief executive Dierk Paskert said that the technology may not be far behind.

“That [battery storage] is an option for the future which we will evaluate over the next months and years. We, as an investor in PV assets, are aware that storage will have a more important role in the future,” he added.

Paskert went on to say that whilst energy storage is not within the current framework agreement, discussions with Solarcentury on energy storage would be forthcoming.

However any move into the nascent technology could be someway off, with Paskert arguing that business models are “not yet mature”, meaning that risk profiles associated with energy storage projects are not yet equivalent with other renewables technologies such as PV or wind.

“But that's changing very quickly and therefore we will take up those discussions, and hopefully we will see our first energy storage project with solarcentury – or other parties – fairly soon,” Paskert said.

When pushed onto discussing specific markets, Paskert said that there was currently no preferential list for Capital Stage, but paid specific mention to the UK as an attractive market.

“For storage assets, all the markets which are not or do not have a feed-in tariff would qualify for storage. So whenever you are exposed to merchant risk at some time, storage kicks in and those probably are the first markets to look at. The markets where you have a very solid feed-in tariff, more or less hinders the development of storage,” he added.

At the start of the year a panel of major UK solar investors remained unconvinced by the business models surrounding battery storage, but since then appetite has grown. Foresight acquired two utility-scale storage assets, albeit backed by Enhanced Frequency Response (EFR) tenders, as business models looked to progress.