With Solar Media market research covering the battery storage markets in both the UK and Ireland, it is useful to apply knowledge gained from tracking these complementary end-markets as they share many similarities in terms of growth potential and companies active in deploying solutions.

This article looks at the current status of each of these end-markets and where there are similarities and differences in how the markets have developed along with future opportunities.

All data mentioned comes from the June editions of the reports, available by following the link here.

The graphic below shows the total pipeline of the two countries broken down by status. We can see that the pipeline is much larger in the UK. This is due to the market taking off earlier with projects in the pipeline dating back to 2016. It is also due to the total size of the electricity network in the UK compared to Ireland. 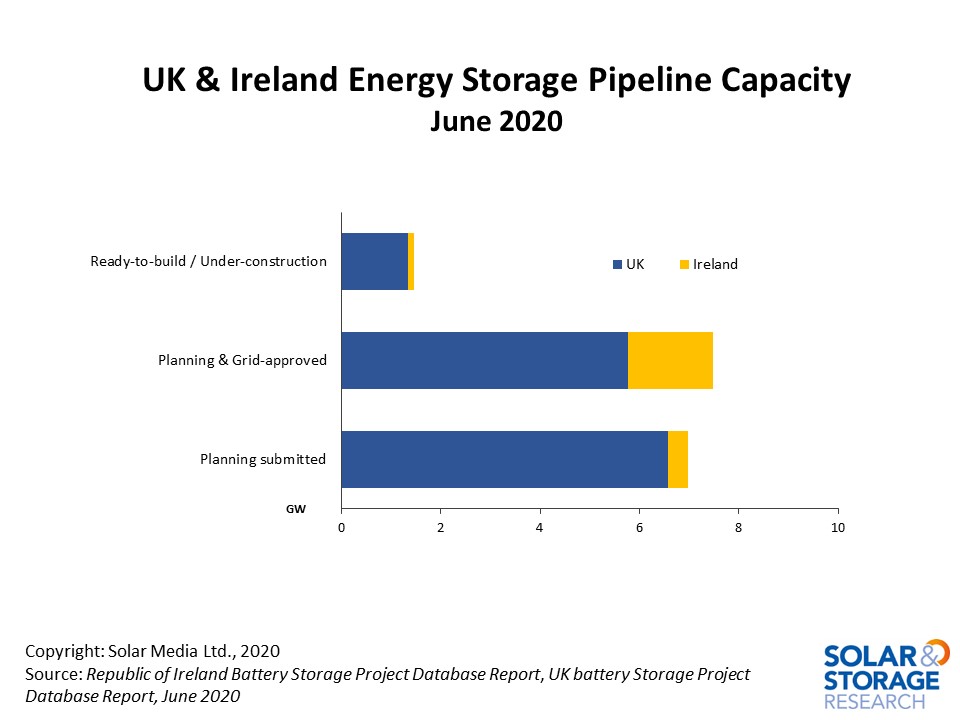 Multiple gigawatts of energy storage pipelines now exist in both the UK and the Republic of Ireland. Image: Solar Media Market Research.

In recent years, we have seen a rapid uptick in applications for battery storage in Ireland driven by increasing renewables and the DS3 scheme, brought in to allow the grid to integrate non-synchronous generation from renewables.

Battery storage in the UK has increased gradually, with initial auctions and procurement from National Grid creating spikes in deployment. However, we are now seeing steady growth in the development of existing sites and in new sites being planned. As business models evolve, we have seen a trend towards longer duration batteries. The de-rating changes to the Capacity Market accelerated the change as revenues for short duration batteries were reduced.

As we see increased focus on varied revenue streams and trading opportunities opening up to battery storage, the business model for longer duration batteries is starting to look more attractive. This is reflected in the projects being built now and proposed for the coming years.

Battery storage developers in the UK have had to build flexibility into plans with long timelines in mind. This can be seen in the initial planning documents with battery details often left somewhat vague, and discussed in terms of overall footprint instead of capacity, with final MW and MWh not defined until later in the process. Changes in the global battery market have also helped to open up opportunities as battery prices decline, allowing longer duration batteries to become financially viable.

Conversely, the market for battery storage in Ireland has been slower to take off as developers waited for details of the DS3 scheme to be released. The DS3 scheme is designed to procure battery storage to meet specific needs, and incorporates different services into packages. The first round of projects to receive contracts are currently under construction and planned to become operational during 2021. Now that the first round of the volume capped tender has taken place, we are waiting to see when the next round will take place; developers are also looking at opportunities through volume uncapped procurement.

There are currently 2.1GW of battery storage projects in the pipeline across the Republic of Ireland, with an additional 350MW in Northern Ireland. Currently around 500MW of these projects have both planning approved and a grid connection contract. The developers of these projects will be watching the progress of the DS3 closely, while also looking at how experience in other markets can be applied to developing projects in Ireland.

There is a further 1.6GW of projects in the planning system, both approved and waiting for approval. The next step for projects with planning approved will be to apply for a grid connection contract. These projects will have a longer development timeline, but represent an ongoing market in Ireland. It is likely that, by the time these projects are ready to build, the market opportunities will look very different.