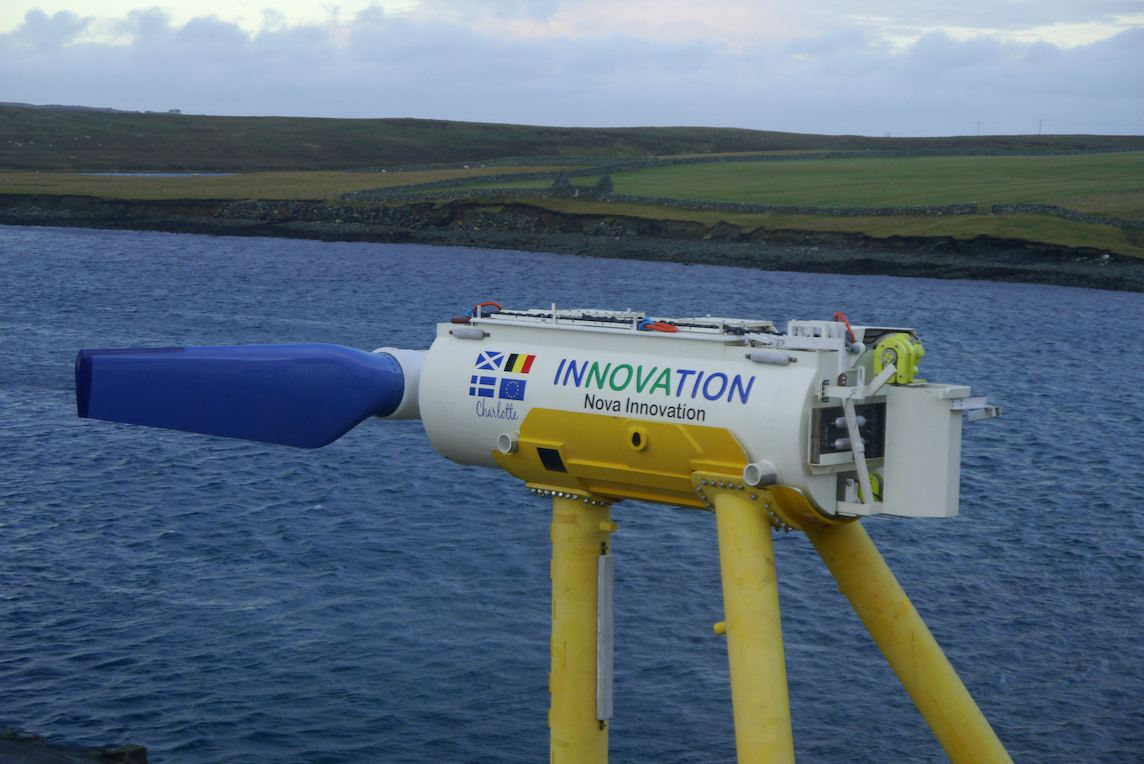 Nova, an Edinburgh-headquartered firm has claimed a world first in pairing Tesla batteries with its own tidal energy turbines in Scotland, supported by government funding.

Scotland’s Low Carbon Infrastructure Transition Programme (LCITP), announced in May 2017 and supported by supported by the European Regional Development Fund, shared out a total of £43 million (US$55.37 million) worth of funding to 13 projects. As well as putting £272,600 towards Nova’s tidal battery energy storage project, other supported initiatives include wind-plus-storage projects using lithium-ion batteries and an ambitious ‘local energy system’ for one of the most remote Scottish Isles – Fair Isle – combining wind, batteries, mechanical flywheel energy storage and solar generation.

Nova said today that since the beginning of October, its Tidal Energy Storage System (TESS), has been supplying the grid with power, having integrated the company’s underwater Shetland Tidal Array with Tesla Powerpack systems. Energy-Storage.news asked Nova today about the size and capacity of the Tesla equipment onsite but did not receive a reply ahead of publication this afternoon.

TESS is able to provide clean energy “on demand”, Nova said in a statement today, and could effectively count as baseload energy for the grid. Tides are predictable and make possible ‘six-hour generation cycle times’, which the company considers perfect for pairing with battery storage. As well as improving security of supply and helping balance supply and demand, it’s also an obvious low carbon source of energy.

“By storing the clean energy generated by the natural ebb and flow of the tide, we can control the supply of electricity to the grid to match demand. This creates a consistent source of completely predictable power from a clean, sustainable resource,” Nova Innovation CEO Simon Forrest said, adding that Nova’s smart grid control, renewable generation and energy storage expertise was key to the successful integration.

Scotland’s energy minister Paul Wheelhouse visited Nova’s workshop today to see how and where the tidal turbines were designed and made, as well as seeing real-time data of the array in action. Wheelhouse said Nova should be “rightly proud” of developing the Shetland Array, a world first in itself. Scotland’s coast is also host to Batwind, a recently-completed offshore wind-plus- (onshore) storage project.

Energy-Storage.news reported in March this year that a provider of a different type of energy storage – flow battery manufacturer RedT – is expected to provide a 0.6MW/3MWh system to a European consortium to be deployed in combination with tidal energy. Elsewhere, Australian firm Carnegie Clean Energy raised around US$4 million to grow its solar, battery storage and wave energy businesses in May.