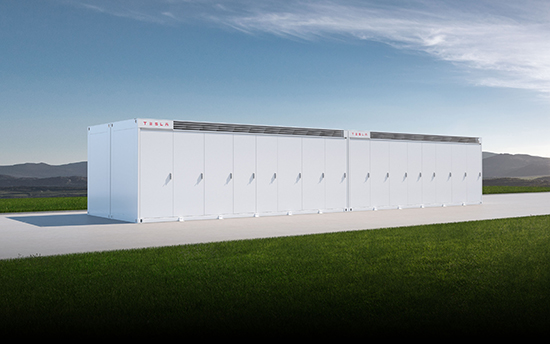 Tesla’s Megapacks. The world’s utility companies will need a “vast amount” of battery storage to enable the growth of renewable energy on the grid, Musk said. Image: Tesla.

Tesla has reported more than 200% year-on-year increases in both solar and energy storage deployments for the second quarter of this year, during which time the company also produced and delivered more than 200,000 vehicles.

The growth in storage installs came largely from several large-scale battery storage projects, although residential storage deployments also nearly doubled year-on-year. The company did note that storage figures can vary greatly from quarter to quarter, with some individual projects in regions like California and Australia adding a few hundred megawatt-hours to the figures in one go.

In solar, the company said that cash / loan solar deployments more than quadrupled year-on-year in addition to the overall tripling of installs. However, this is compared to Q2 2020, where the figures were particularly low: since then it has achieved 57MW of installs in Q3 2020, 86MW in Q4 2020, then 92MW in Q1 2021 and back down again to 85MW this quarter just gone. Solar roof deployments also “grew substantially,” the company claimed, both year-on-year and from quarter-to-quarter, although the challenges of scaling that product line have been well documented.

The company combined its revenue figures for energy generation and storage, given as US$801 million for the quarter. This is a significant increase from US$494 million in the previous quarter, and more than double year-on-year (Q2 2020 = US$370 million). In context, automotive sales in Q2 2021 netted Tesla revenues of US$9,874 million. Overall, the company said it had made adjusted quarterly EBITDA of US$2,487 million, a 106% leap year-on-year and also a big jump from Q3 2020 to Q1 2021, where it had hovered between US$1,800 million to US$1,850 million for each quarter.

Big demand for battery storage but vehicles remain the priority

While an earnings call with executives including CEO Elon Musk made scant mention of the solar business division, Musk did note that its Megapack grid-scale energy storage solution, which comes with around 3MWh per unit of storage, is “basically sold out through the end of next year”. The executives took part in the call from their offices at the company’s Texas factory which is under construction.

Musk also said that due to a global semiconductor shortage which has affected its automotive production, the company has had to slow production of its Powerwall residential energy storage system (ESS), which uses a lot of the same chip components. Despite a massive backlog in demand for the product, Tesla has been forced to make the decision to focus on vehicles instead.

However, once semiconductor shortages are alleviated and depending on battery cell supply dynamics, Tesla could “massively” ramp up stationary storage production, he said. The company had a “chance of hitting an annualised rate of a million units of Powerwall next year, maybe towards on the order of 20,000 a week,” the CEO said.

Demand for Powerwalls exceeds a million units per year, while “vast amounts” of Megapacks would be needed by utilities to support their transition to sustainable energy globally. In the long-term, Tesla and other suppliers “need to produce at least 1,000GWh a year and maybe 2,000GWh a year” of stationary energy storage, Musk claimed.

Still, he and senior vice president of powertrain and energy engineering Drew Baglino made it clear that vehicles remain the major priority, particularly when it came to absorbing demand for battery cells. The company’s cell suppliers could double their supply to Tesla in 2022 and the company might take a view that it should overshoot its targets on cell supply and allow the stationary storage division to benefit from any excess. But in the event that cell supply shortages bite, Megapack and Powerwall production would likely be throttled.

Musk reiterated previously made assertions that the company is likely to increasingly favour lithium iron phosphate (LFP) batteries for its stationary storage products, while he said that even for its vehicles, which require higher energy density, it is a “misconception” that Tesla uses a lot of cobalt, even in its nickel-based chemistry batteries. Nonetheless, supply of cobalt, and more importantly, nickel, may well have a bearing on the company’s supply chains he said, making the “long-term scaling” towards more and more iron-based cells.

Other recent developments include progress in the company's 4680 battery cell production validation process at its facilities in Kato, California, and the ongoing construction of Giga Berlin, another large factory facility. Tesla also opened up a California virtual power plant (VPP) programme on 22 July, for which it is seeking to enroll up to 50,000 Powerwall systems that could be aggregated together to provide a larger resource for the state's grid operator and utilities. During July the company also sold off most of its interest in Maxwell Technologies, which makes ultracapacitors and was developing a dry battery electrode technology before Tesla's acquisition in 2019. Tesla has sold off the ultracapacitor business to California-based ultracap company UCAP Power but has reportedly retained the dry cell manufacturing process which it is thought could enable cost and performance improvements in EVs.