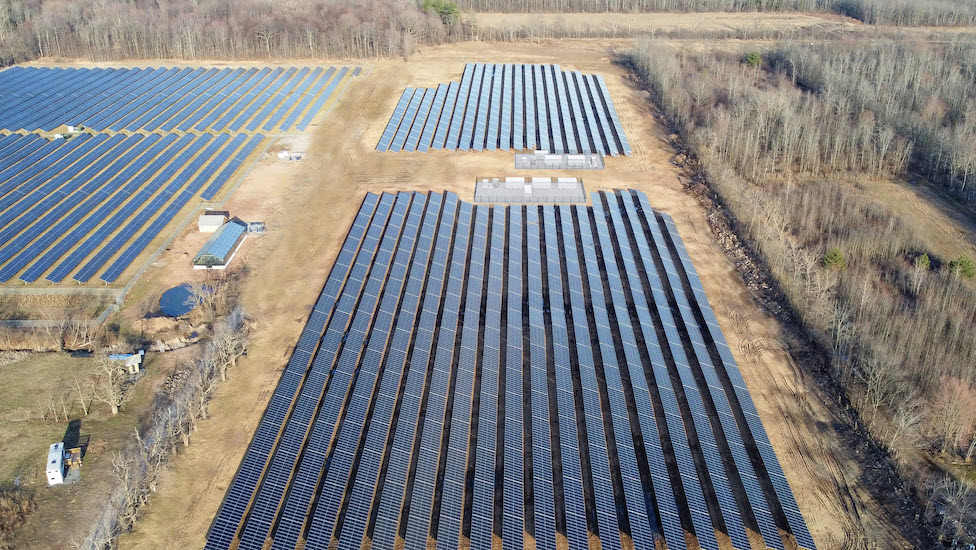 Rendering of how one of the projects, in rural upstate New York, will look. Image: Convergent Energy + Power.

Over 75 Tops stores will be powered by the solar power plants, while residential billpayers will also be able to subscribe to buy power from the community facilities. Community solar (and solar-plus-storage) allow people that may not be able to have their own solar generation at their home or business to benefit from clean energy by subscribing to such ‘shared’ programmes.

In March, this site reported that the developer appointed GE Renewable Energy to supply key equipment to the three projects. The supply deal includes integrated solar inverters and energy storage systems, while GE will also provide a 20-year service agreement.

“These new facilities will increase access to solar energy for both Tops and individual customers, or community members, in upstate New York,” Genova said.

The supermarket group has subscribed to purchase credits for renewable energy generated by the solar farms, through New York State’s Value of Distributed Energy Resource (VDER) tariff. Also known as the Value Stack, the VDER tariff has been established by the New York Public Service Commission to compensate energy created by solar and other distributed energy resources (DERs).

Convergent Energy + Power’s Frank Genova said the company is not able to disclose the length of the agreement with the supermarket chain, but confirmed that the deal is a subscription agreement for the VDER credits.

“Community solar-plus-storage, facilitated by the Value of Distributed Energy Resource tariff (VDER) in New York, allows the benefits of solar energy flow to businesses and individuals from off-site arrays and is an increasingly popular way to increase access to renewable generation,” Genova said.

While Tops’ individual deal is for an undisclosed period, Frank Genova said that the VDER programme provides up to 25 years of certainty for DER revenue streams. VDER, and programmes like it that provide that revenue certainty for megawatt-scale community energy resources have “tremendous value,” the COO and CFO told Energy-Storage.news.

“Convergent anticipates that innovative utility tariffs and state programs like VDER will become more common, which will allow for the development and expansion of more renewable resources coupled with energy storage.”