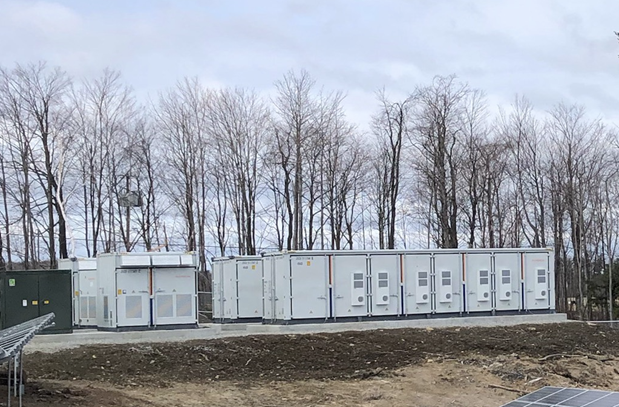 Commercial and industrial (C&I) battery storage from Stem Inc allows business to cut their electricity costs through peak shaving of demand charges levied on commercial customers in the US, while the systems can also be co-optimised to play into other opportunities such as grid services. Image: Stem Inc.

Stem Inc, which was a pioneer in deploying battery storage systems in combination with smart software that enables commercial and industrial electricity users to lower their electricity bills from reducing their draw of power from the grid at peak times, while also enrolling the batteries in various grid, energy and capacity services programmes to earn revenues, announced its intent to merge with the SPAC last December. At the time, the two companies said the deal could be worth as much as US$608 million in total.

Yesterday, Stem said in a press release that the Board of Directors at Star Peak unanimously approved the transaction at a special meeting of the SPAC’s stockholders, held on 27 April. Star Peak now changes its name to Stem Inc and common stock and warrants in the newly combined entity begin trading today under the tickers “STEM” and “STEM.WS”.

“We are more confident than ever in Stem’s significant value, offering investors a unique ESG opportunity to invest in a pure-play clean energy company that’s helping to revolutionise the electric grid.”

“With over US$500 million of cash on the balance sheet, zero debt and a new public platform, we are now armed with the capital that will help propel Stem’s product, capabilities and market reach to the next level,” Stem’s chief financial officer, Bill Bush, said.

“We remain well positioned for significant visible growth, including a more than four-fold expected annual increase in our 2021 revenue, 100% of which is covered by our contracted backlog.”

While financial expert Charles Lesser at consultancy Apricum wrote in a Guest Blog for this site that Stem was a classic example of a clean energy company with a de-risked business model and strong equity returns that nonetheless saw access to capital as its “final impediment to growth”. Lesser wrote that Stem Inc may be better suited to the SPAC merger route of going public — which can be high risk but also high reward — than some others in the clean, smart and renewable energy industries.

However, Stem’s financial results for 2020, shown in a Form S-4 filed with the US Securities and Exchange Commission (SEC) in March ahead of the combination, demonstrated some of the challenges and risks that lie ahead.

CEO Carrington says combination will ‘accelerate next phase of growth’

Revenues almost doubled in 2020 to more than US$36 million from 2019 figures of about US$17.5 million and as CFO Bill Bush mentioned the company is forecasting even stronger growth this year, but the company still admitted in the SEC filing that it is unlikely to turn a profit before the end of 2022.

The company has already made some progress in expanding overseas into Canada, Japan and Chile as well as eastwards across the US from its west coast base into Massachusetts’ rapidly growing solar-plus-storage market, but wants to expand further into growing markets such as Mexico, Australia, Europe and Colombia. Meanwhile in order to scale up, despite incurring significant losses and going through significant sums of cash, it still needs to keep investing in areas including sales, marketing, R&D, infrastructure and staffing systems to support the expansion. Risks include a dependency on being able to negotiate favourable terms with battery storage OEMs, several of which the company uses for its projects.

“We are excited to complete this business combination, which will accelerate the next phase of Stem’s growth and further extend our leadership position in AI-driven clean energy storage systems. We continue to benefit from strong, sustainable macro tailwinds as the world deepens its commitment to decarbonisation,” Stem Inc CEO John Carrington, who will continue in his role as will the rest of the storage company’s senior management team, said.

Stem said the funds raised will fuel that planned growth, advance the company’s software platform, called Athena and will also be used to pay off outstanding debts. Stem shareholders’ equity holdings have been rolled into the new company.