Solar-plus-storage is ‘chasing gas off the grid’

The price of power from solar-plus-storage is already cost-competitive with some new build gas generators in the US and not just for gas peaker plants.

In a study by Fluence and a group of MBA candidates at the Tepper School of Business at Carnegie Mellon University, it was found building new mid-merit gas plants was no longer the best value option for utilities.

“During the same 30 years, natural gas’s share has leapt from 9% to 35%. The shale gas revolution has made gas the fuel that most executives think of first. This work makes it clear that, under certain conditions that the paper defines clearly, a solar-and-storage plant can more than hold its own against gas when the decision is made about what plants to build,” explained Apt.

Fluence’s lead data scientist Colleen Lueken explained in a blog for the company that the report was comparing both the operational and financial performance of the projects.

“The surprising results are in the chart below: S+S can compete – operationally and financially – with mid-merit NGCC plants in many regions of the United States today. For example, in the California Independent System Operator (CAISO) service territory, the net levelized cost of energy (net LCOE, defined below) for S+S runs from US$39 to US$48, with a mid-point of US$43.20. A comparable mid-merit NGCC would have a net LCOE of US$60-$116.” 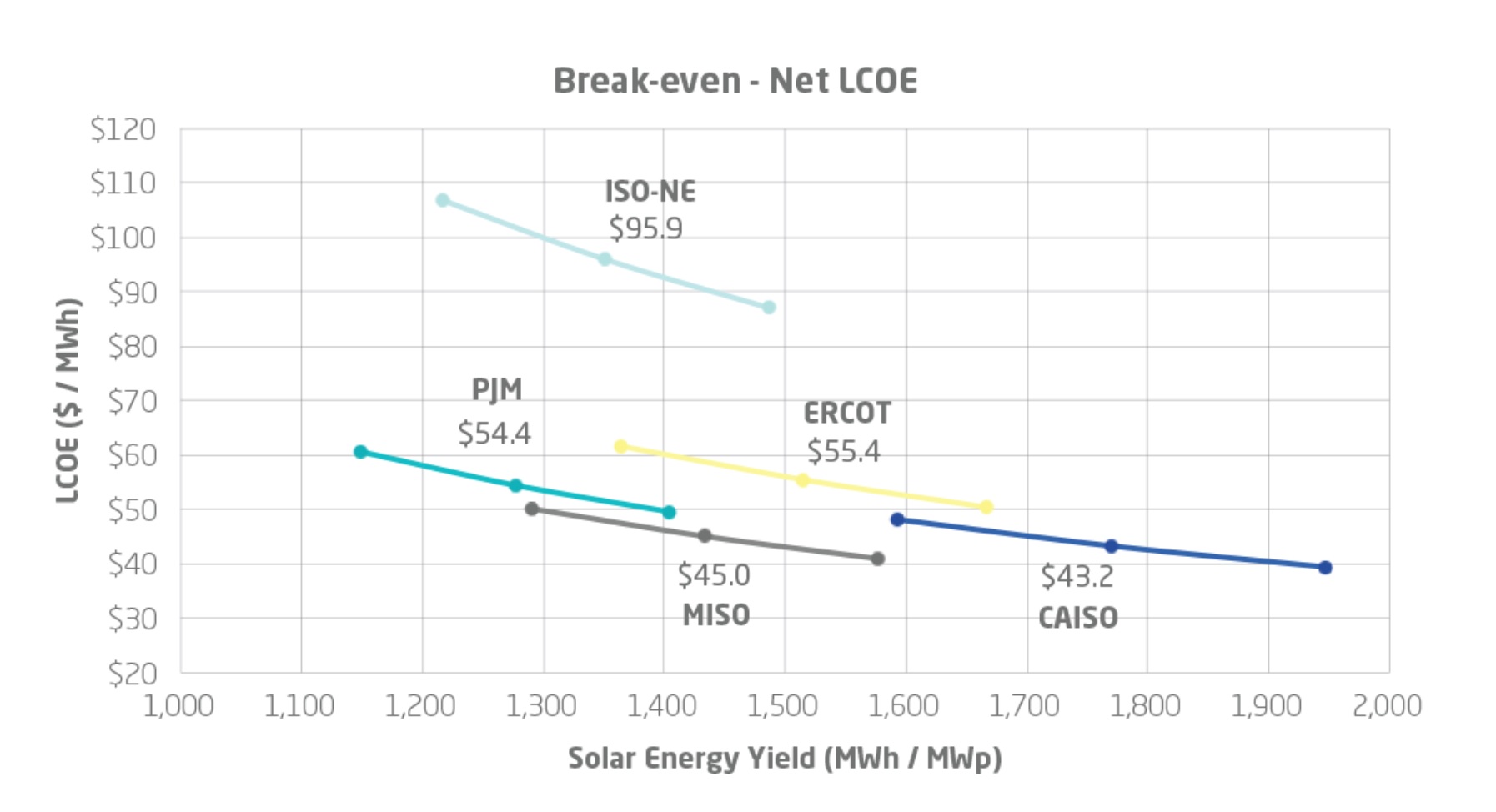 Professor Chris Telmer, who oversaw the study together with Apt, stresses that utilities need to be thinking about the precise nature of job that any new build plant will be required to perform.

“The context for the paper’s question is that of a utility preparing an IRP, looking at its existing fleet of NGCC plants, recognizing that some of them operate as shoulder plants, and then considering how to do these ‘jobs’ as it expands its load base or replaces some of its fleet.

“A utility executive considering the paper’s answer might ask themselves ‘why would I build a new gas plant and have it run at a capacity factor that averages 30-40%?’. This is pretty much the same question as ‘why would I ever build a mid-merit shoulder plant’. The students’ paper does not have a definitive answer to these questions. They simply look at the data, see that many plants do run as shoulder plants, and then they ask ‘if you do build such a plant, here is how cost-effective it would be relative to solar-and-storage’.”

Importantly, Telmer flags that the study doesn’t factor in how a utility might more broadly plan its strategy for bidding into the mid-merit market. As a result, the study’s conclusions could be less persuasive to a utility decision-maker.

The scope of the study may appear fairly niche but as Lueken explains, with the peaker argument put to bed, looking at mid-merit plants is the next step:

“Looking beyond peakers, tracking the ability of solar and storage to compete with mid-merit natural gas is the first part of a much larger question – how fast can we replace all natural gas – and even baseload – generation with renewables and storage? In response, the storage industry is now pivoting its focus toward long-duration systems – and which technologies are best positioned to supply storage with the 6-10 hours of duration, or longer, that will be required to meet this stretch goal.”

This month Southern California Edison signed up for six additional storage systems to compensate for a localised absence of gas generation as a result of the Aliso Canyon leak.