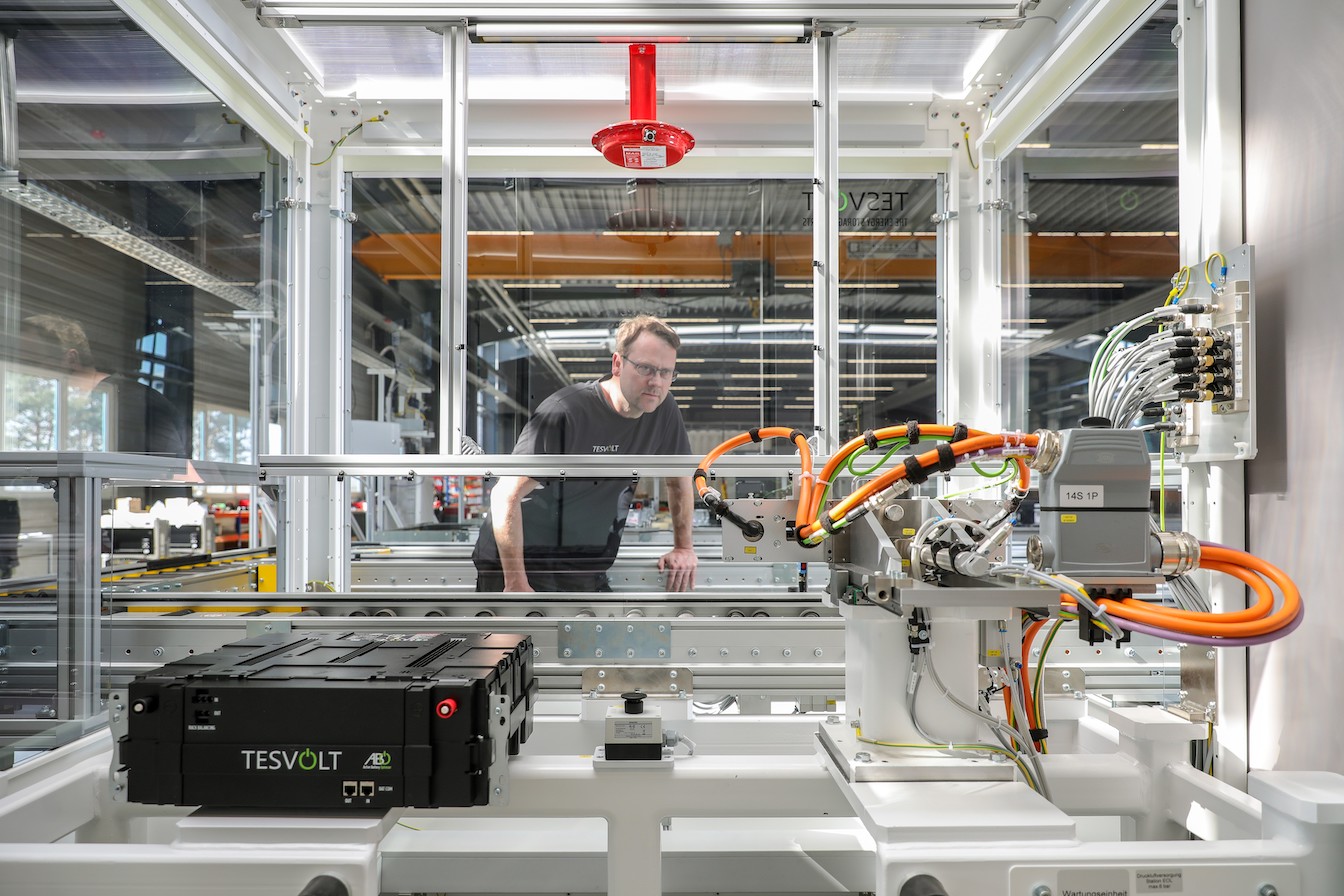 Batteries are fully charged and discharged during the inspection process at the Wittenberg plant. Image: Tesvolt.

Production of commercial energy storage systems has begun at Tesvolt’s new 255MWh annual capacity factory in Wittenberg, Germany, with staff working in isolation due to the risk of COVID-19 infection.

Semi-automated production started up today, the company said in a release emailed to Energy-Storage.news, with the 12,000 m² of floor space able to produce up to 1MWh of systems a day. One key step in the production process is the semi-automation of full cycling of batteries before they go into Tesvolt’s storage systems. This means batteries are fully charged and discharged and thoroughly checked, then inspected on a fully-automated line. Also worth noting is that Tesvolt’s battery cell supplier, Samsung SDI, is up and running to produce and ship from its South Korea factories.

“When it comes to COVID-19, our employees’ safety is of course our top priority. Three weeks ago we asked all staff who can do so to work from home — including production planning staff,” company co-founder and director of engineering Simon Schandert said.

“In production itself, meanwhile, employees are still at work but isolated from one another. We’re lucky that production is continuing at our battery cell supplier Samsung SDI in Korea.”

COVID-19: ‘Spirit of solidarity, creativity, flexibility and ingenuity’ is required

At an interview in mid-2019. Tesvolt managing director and co-founder Daniel Hannemann had told Energy-Storage.news that it was part of the company’s strategy for reasons including quality control to have a sole supplier for battery cells – as well as for inverters, for which the company is tied with SMA. The company uses prismatic lithium NMC cells of the type found in electric cars, but is not planning to enter the e-mobility market, Hannemann said in that interview last year.

Tesvolt said that order volumes have almost trebled year-on-year for this quarter and will seek to gradually add capacity. Managing director Hannemann said in a statement today however that, like everybody else, Tesvolt is not yet sure “how demand will change in light of the coronavirus crisis”.

“We want to work closely with our customers to overcome these new challenges in a spirit of solidarity, creativity, flexibility and ingenuity,” Hannemann said.

The company has also put its roadshow series for installers and partners online, as well as training and other webinars, quickly setting up a recording studio so it could switch from face-to-face to virtual format.

Tesvolt playfully describes the newly opened facility as Europe’s “first gigafactory for commercial battery storage systems”, as it has the option of scaling up production with demand from its initial capacity to reach 1GWh annual output for the systems, which range from 9.6kWh into multiple megawatts.

In contrast, for example, Tesla’s Nevada Gigafactory One can make more than two dozen megawatt-hours of battery cells as well as systems a year, and battery and battery storage gigafactories planned in Europe from the likes of Sweden-headquartered start-up Northvolt and EV battery company AKASOL are similarly in the multiple gigawatt range from their opening.

Nonetheless, those other gigafactories all address a much larger market segment that includes electric vehicles (EVs), making the Tesvolt facility among the most ambitious in scale for the sector it services. In May 2019, as it announced a “mutli-million” Euro investment had been made in production lines, Tesvolt also claimed the factory will be fully supplied by solar energy, including a 200kWp PV system to power offices and system production lines, paired with one of its own branded 350kWh Tesvolt energy storage systems.