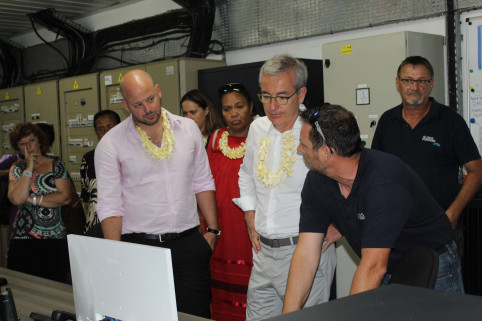 The French overseas territory of New Caledonia has hailed the switch-on of a 16MWp solar farm, with battery energy storage to be later attached, and another standalone 5MWh battery project as significant steps towards '100% renewable energy’ targets.

Helio Boulouparis 2 is now the largest solar farm on New Caledonia, overtaking the first phase of the project, inaugurated in 2017 and just over 11MWp. The 16MWp Helio Bouloparis 2 PV plant has started production already, but still to come is a lithium-ion battery energy storage system (BESS) to be integrated with the power plant, Total said in a release today.

The French territory lies just a few hours’ flight from the northern coast of Australia. Total Quadran said that of the 900MW of renewable power the company generates each year, 50MW are in New Caledonia, serving around 140,000 people on the island with energy from seven solar farms.

While in many ways New Caledonia has attained growing autonomy from France, the European country’s far-away territories could still be beneficiaries of ‘mainland’ policy. Tenders held in France for contracts to build clean energy projects, particularly solar and storage, on overseas territories have enjoyed some of the most rapid price declines seen in competitive solicitation processes for the technology. The projects also provide opportunities for local partners to work with the international renewables community, including a project between Nidec ASI and Corsica Sole in Corsica, reported by Energy-Storage.news back in 2017.

Island territories in general, particularly those blessed with abundant sunshine, are considered a viable business opportunity due to the high cost of importing fuel to burn for electricity. Combined or hybrid renewable, clean and smart technologies provide an opportunity to reduce pollution and emissions while showcasing what a future powered by renewables might really look like.

Island to be 100% renewable next year

From around 22% renewable in 2018, the tiny island is going fully renewable energy-powered during 2020, with growing numbers of solar and wind energy generators to join existing renewables facilities as well as the battery on the island’s grid during the next couple of years. Biofuels including recycled cooking oils will help plug the gaps, in a programme launched by parent company ENGIE EEC in 2017. Local minister Christoph Gyges described the Lifou project as a model for what Pacific Island territories can achieve.

Engie, which acquired a majority stake in EPS at the beginning of 2018, has pointed to a potential reduction of some 3 million tonnes of fossil fuel imports annually using the Lifou island ESS, as well as attendant carbon emissions reductions.

“The system delivered in Lifou leverages the expertise built by ENGIE EPS in designing, supplying and operating microgrid systems on islands around the globe, and represents the blueprint for achieving exceptional levels of renewable penetration, while guaranteeing world-class power quality and reliability,” ENGIE EPS chief executive officer, Carlalberto Guglielminotti, said.