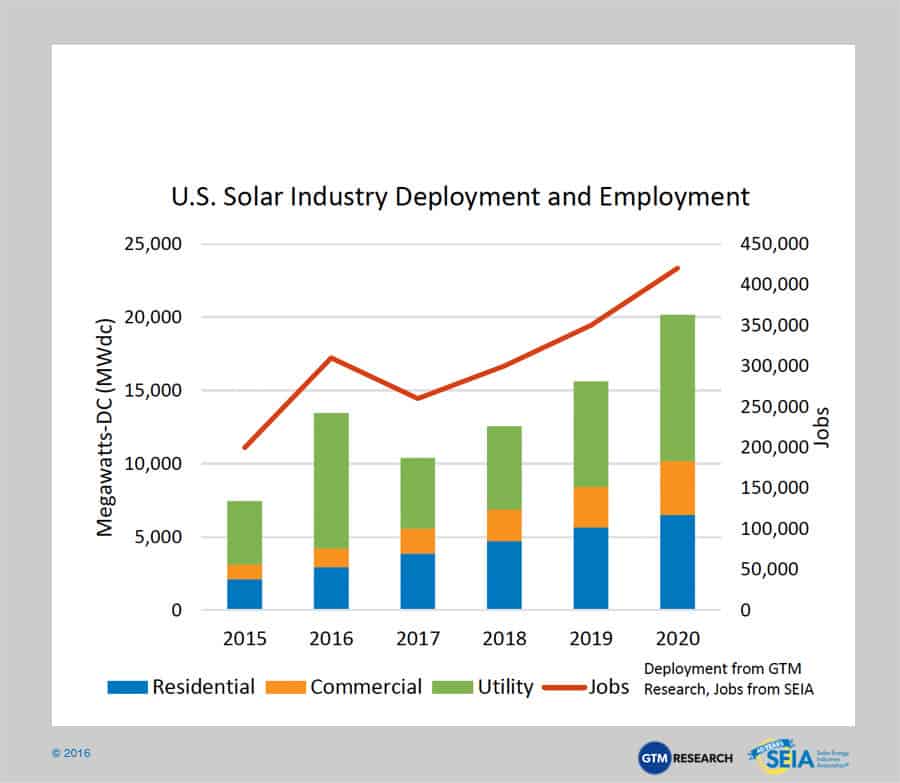 Predicted growth in US solar jobs, in a graph produced by SEIA when the ITC for solar was extended last year, until 2020. Image: SEIA.

Senator Martin Heinrich has proposed granting tax relief for purchasers of energy storage systems, in a similar way to how the Investment Tax Credit (ITC) is applied to residential solar PV purchases.

Heinrich, democratic senator for the state of New Mexico, along with Minnesota’s Al Franken, also a democrat, last week introduced S.1851, a bill in Congress to create research and demonstration programmes for energy storage systems. Heinrich, with Franken as co-sponsor, also that week introduced S.1868, “a bill to amend the Internal Revenue Code of 1986 to provide tax credits for energy storage technologies, and for other purposes”.

At present in the US, the only nationwide, federal support scheme applied to purchases of energy storage systems is the solar ITC, which gives consumers the right to claim back 30% of the cost of installing a PV system from federal taxes. The ITC is applied to both residential and commercial and industrial (C&I) systems. However, at present, the tax credits are only available for energy storage system purchases if installed at the same time that a solar PV system is being deployed.

Heinrich’s bill, which is also known under the abbreviated title “Energy Storage Tax Incentive and Deployment Act of 2017”, has been read twice and now referred to the Senate’s Committee on Finance. The bill was first floated in mid-2016, where it gained support from both Democrat and Republican senators. There are separate provisions for providing an 'Energy credit', defined by the internal revenue code as “the energy percentage of the basis of each energy property placed in service during such taxable year” and for residential energy efficiency measures on private properties.

The bill’s 'Energy credit' definition would include energy storage equipment from batteries to mechanical energy storage with compressed air, pumped hydropower, hydrogen storage, fuel cells, thermal energy storage, flywheels, capacitors, superconducting magnets and any other applicable technologies. Systems must however have a capacity of 5kWh or above. For the residential energy efficiency tax credit, systems would have to be 3kWh capacity or over.

When the solar ITC in the US was unexpectedly extended last year through to 2020, the Solar Energy Industries’ Association (SEIA), said it would lead to “sustained growth” in the PV industry. SEIA said the extension could be a major contributing factor in a 25GW increase in PV deployment, more than 50% over baseline expectations without an ITC extension. Meanwhile, various commentators have criticised the lack of a standalone ITC for energy storage and the arbitrary application of the current rules which allow for tax credits if solar and storage are both installed at the same time.

Of Heinrich’s S.1868 bill, Energy Storage Association CEO Kelly Speakes-Backman thanked the Senator and his bipartisan coalition of co-sponsors for introducing the act.

“If enacted, this bill will unlock competitive access to investment for a more resilient, efficient, sustainable, and affordable electrical grid by expanding the investment tax credit (ITC) to include all types of advanced energy storage – as a standalone resource, integrated into microgrids or with renewable energy systems,” Speakes-Backman said.

“The cost of energy storage systems is now already approaching the U.S. Energy Information Administration’s projections, originally estimated for 2040. As the industry works to ensure storage is compensated for all the value it brings to the grid and to electricity users, the investment tax credit will continue to accelerate the deployment of safe and reliable advanced energy storage systems. The Energy Storage Association looks forward to working with Members of Congress to expand access to new private investment and competitive markets for energy storage”.