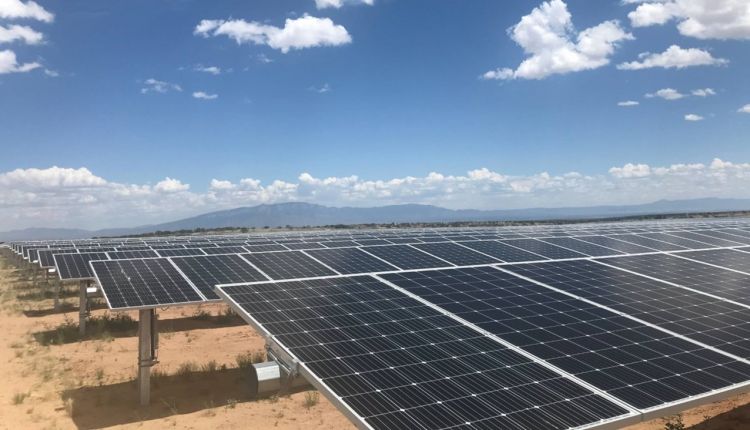 New Mexico’s largest utility plans to develop 950MW of solar and storage by 2022 as it exits the state’s San Juan coal plant and eyes 100% emissions-free electricity by 2040.

Public Service Company of New Mexico’s (PNM) shift, supported by power purchase agreements on four generation and storage projects, also presents a barrier to the success of a proposed carbon-capture retrofit aimed at keeping the San Juan facility online, a brief from the Institute for Energy Economics and Financial Analysis (IEEFA) says.

IEEFA analyst Karl Cates said PNM’s plan signals a larger impending shift toward utility-scale renewables in the Four Corners area of Arizona and New Mexico: “It will be seen industrywide as a fresh indication – on top of many others – of where regional and national energy markets are quickly moving.”

A filing by PNM with the New Mexico Public Regulation Commission details how the utility will replace lost power from the coal plant. The four projects include: Arroyo Solar (300MW of generation paired with 150MW of storage), San Juan Solar 1 (200MW and 100MW, respectively), 201LC 8me (100MW and 30MW) and Jicarilla Solar 1 (50MW and 20MW).

While the commission still needs to sign off on two of the four solar deals, IEEFA notes it is likely to do so in the coming weeks given its recent endorsement of full renewable energy replacement for the San Juan plant.

Australian renewable energy investment firm Providence Asset Group is to develop 39 solar farms, each of which will be paired with 30MWh of storage.

The company has unveiled plans to expand into the state of Victoria with five solar operational solar farms and a further six under construction. All of the facilities will feature “advanced hybrid storage technology”, including hydrogen storage and traditional lithium-ion batteries.

The company is working with the University of New South Wales to develop hydrogen storage, which it says enables the storage of surplus electricity “more cost-effectively than the lithium batteries currently in use”.

Under Providence’s plan for both New South Wales and Victoria, the storage component could accommodate up to 1.2GWh of clean energy.

Italian renewable energy company Enel Green Power has broken ground on its second North American solar-plus-storage project as it continues to ramp up its US renewables fleet and aims to hit 1GW of deployed battery storage in two years.

Located west of the Dallas-Fort Worth area in Haskell County, Texas, the 284MW Azure Sky project will feature 700,000 bifacial panels and be paired with an 81MW battery. It is expected to be operational by summer 2021.

The Enel subsidiary has signed a power purchase agreement (PPA) with The Home Depot for a 75MW portion of the project, a deal that represents the retailer’s largest renewable energy procurement.

The groundbreaking comes after Enel announced its first US solar-storage hybrid project in July alongside plans to install 1GW of battery storage capacity across the company’s renewable portfolio in the country by 2022.